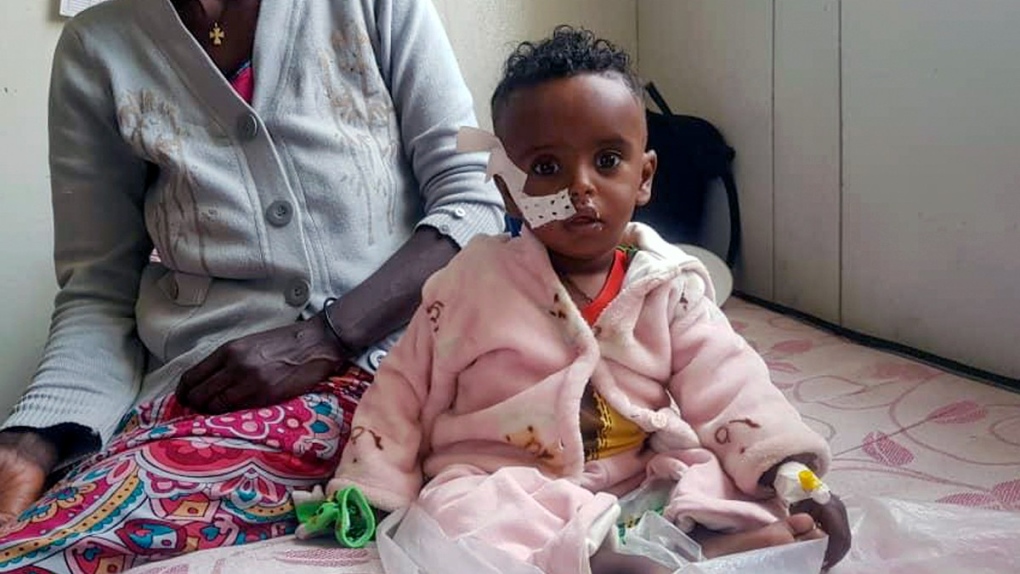 Yordanos Mebrahtiu, 1, is treated for malnutrition at the Ayder Referral Hospital in Mekele, in the Tigray region of northern Ethiopia, Oct. 4, 2022. (AP Photo)
NAIROBI, Kenya -

Babies in Ethiopia's embattled Tigray region are dying in their first month of life at four times the rate before the war cut off access to most medical care for over 5 million people, according to the most sweeping study yet of how mothers and children are suffering.

Women are dying during pregnancy or within 42 days of giving birth at five times the rate before the war, and children under 5 are dying at twice the prewar rate, often because of easily preventable reasons, according to the yet-unpublished study shared by its authors with The Associated Press.

Almost two years have passed since the war started and Ethiopia's government isolated the Tigray region from the rest of the world, severing basic services such as electricity, phone, internet and banking.

While United Nations-backed investigators last month said all sides including the Tigray forces have committed abuses, they said the Ethiopian government is using "starvation of civilians" as a weapon of war. Tigray is "one of the worst manmade humanitarian crises in the world," the European Union foreign policy chief said Thursday.

The warring sides have been invited to African Union-mediated peace talks this weekend in South Africa.

A lull in the war earlier this year allowed thousands of trucks of humanitarian aid into Tigray, but renewed fighting in August has again stopped deliveries to a region where critical medical supplies like insulin and childhood vaccines have run out. There is an "extreme shortage" of medicines and equipment, the UN-backed investigators found.

Pregnant women and young children, least to blame for the fighting, are among the most vulnerable. The new study was conducted in May and June by local health authorities with financial support from two UN agencies and studied more than 189,000 households in six of the region's seven zones via cluster sampling. With limited fuel for transport, researchers at times walked for hours to reach rural areas.

Maternal mortality was at 840 deaths per 100,000 live births, up from a low of 186 before the war, with obstetric hemorrhage and hypertension the most common causes. "This level is unacceptably high and is comparable to the level which was 22 years back," the study says.

More than 80% of mothers died outside a health facility, another stark contrast, the study says. More than 90% of mothers in Tigray before the war had prenatal care and more than 70% benefited from skilled delivery, according to an analysis published in the BMJ Global Health journal last year.

The increase in maternal mortality in Tigray has been "phenomenal," the UN Population Fund said this year.

Neonatal mortality, or children dying in the first 28 days of life, was at 36 in 1,000 live births, the new study says. That's a four-fold increase from prewar levels, and more than half of the deaths occurred at home without medical intervention. The most common causes were prematurity, infections and perinatal asphyxia, or the inability to establish breathing at birth.

Under-5 mortality was 59 in 1,000 live births, double the rate before the war. "Vaccine-preventable diseases like diarrheal disease, pneumonia and pertussis account for the majority of causes," the study says.

In images shared this week with the AP from Tigray's flagship hospital in the capital, Mekele, a health worker pinched the thin stomach of a small child, 2-year-old Selam Mulu. The skin stayed pinched after the hand was removed, a sign of dehydration in malnutrition.

"For women here, it's hell," a gynecologist in Mekele who was part of the research team told the AP. He spoke on condition of anonymity for fear of retaliation.

"They get pregnant, they cannot access care," he said. "I'm talking about the rural women. And if she's in labour and if she lives in the mountains, which is the case for most pregnant mothers in the outskirts, they cannot travel. They cannot call an ambulance. There is no money to pay for private transportation. Even if they arrive at a health facility, there is nothing."

Before the war, a woman's pregnancy was a joyous matter, the gynecologist said. Now it's a bad omen, with people feeling sorry for her.

"I haven't heard of such things in other parts of the world," he said.

This occurs as the UN-backed investigators found that some Tigrayans are resorting to transactional sex to survive.

It remains difficult to estimate the war's death toll because of the widespread constraints, the gynecologist added. Thousands of people have died. Independent journalists have been barred from the region.

The researchers plan to share their results with the international community and Ethiopia's health minister, Lia Tadesse, who is also a gynecologist. The minister, told of the findings and asked for comment, didn't reply to the AP.

The war has devastated Tigray's once well-funded health system, the gynecologist said. "People would ask you, 'Are you going to help us? What's after the data collection? Are you going to solve our problems?' It was haunting."

Canada's transport minister says the federal government and the country's aviation sector are working on strengthening the passenger bill of rights following a summer plagued by delayed and cancelled flights.

Ontario passes housing bill despite criticism from municipalities over funding

Protests in Iran continue despite internet blackouts; Canadians respond with rallies of support

Nearly two months after the protests were first ignited, the people of Iran continue to march in the streets, despite increasing violence, internet blackouts and arrests, while Canadians support them overseas, organizing rallies in response.

Notable moments, political statements made in Week 1 of the World Cup

As much as the action on the pitch has captivated fans across the globe, the 2022 World Cup in Qatar has also made important headlines for incidents off the pitch.

Prime Minister Justin Trudeau visited Monday the graves of victims of a deadly stabbing rampage at a Saskatchewan First Nation before he was to meet with family members in private.