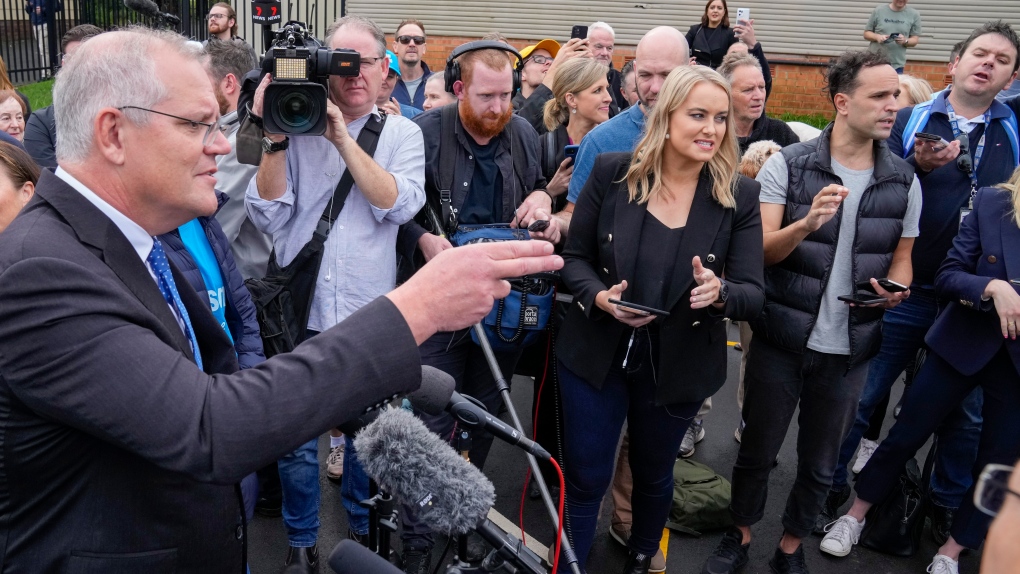 There was no uniform swing in early counting of votes in Australia's election on Saturday, indicating a close result in a tight race that will decide whether Prime Minister Scott Morrison's conservative government can defy odds and rule for a fourth three-year term.

Opposition leader Anthony Albanese's centre-left Labour Party ended the six-week campaign as a favourite to win its first election since 2007. But Morrison defied the opinion polls in 2019 by leading his coalition to a narrow victory.

His coalition holds the narrowest of majorities -- 76 seats in the 151-member House of Representatives, where parties need a majority to form a government.

Minor parties and independents appeared to be taking votes from the major parties, which increases the likelihood of a hung parliament and a minority government.

A record proportion of postal votes because of the pandemic, which won't be added to the count until Sunday, adds to the uncertainty in early counting.

As well as campaigning against Labour, Morrison's conservative Liberal Party is fighting off a new challenge from so-called teal independent candidates to key government lawmakers' reelection in party strongholds.

One of them is Zali Steggall, who won a seat from the Liberal Party in 2019 when she ousted former Prime Minister Tony Abbott.

She appeared likely to retain her Sydney seat by a larger margin.

"The feedback very much was people are really frustrated," Steggal told Australian Broadcasting Corp. "Cost of living issues but also climate change simply did not feature in the policies and platforms from the major parties."

The teal independents are marketed as a greener shade than the Liberal Party's traditional blue colour and want stronger government action on reducing Australia's greenhouse gas emissions than either the government or Labor are proposing.

Both leaders campaigned in Melbourne on Saturday morning before voting in their hometown of Sydney.

Albanese went with his partner Jodie Haydon, his 21-year-old son Nathan Albanese and his cavoodle Toto to vote at the Marrickville Town Hall in his inner-Sydney electorate.

Albanese would not be drawn into saying whether Toto would move into the prime minister's official residence in Sydney or Canberra if Labour wins.

"We're not getting ahead of ourselves," Albanese said. "I'm very positive and hopeful about a good outcome tonight."

He referred to his humble upbringing as the only child of a single mother who became a disabled pensioner and lived in government housing.

"When you come from where I've come from, one of the advantages that you have is that you don't get ahead of yourself. Everything in life's a bonus," Albanese said.

Morrison voted with his wife Jenny at the Lilli Pilli Public School in his southern Sydney electorate.

He later used the rare interception of a suspected asylum seeker boat attempting to enter Australian waters as a reason why voters should reelect his government.

Australian Border Force said in a statement the boat had been intercepted in a "likely attempt to illegally enter Australia from Sri Lanka."

The Australian policy was to return those on board to their point of departure, the statement said.

"I've been here to stop this boat, but in order for me to be there to stop those that may come from here, you need to vote Liberal and Nationals today," Morrison told reporters, referring to his coalition.

The boat carrying 15 passengers was intercepted near the Australian Indian Ocean territory of Christmas Island on Saturday morning, The Weekend Australian newspaper reported.

The number of asylum seekers arriving in Australian waters by boat peaked at over 20,000 in 2013, the year Morrison's coalition was first elected.

The first polling stations closed on the country's east coast at 6 p.m. (0800 GMT). The west coast is two hours behind.

Due to the pandemic, around half of Australia's 17 million electors have voted early or applied for postal votes, which will likely slow the count.

Voting is compulsory for adult citizens and 92% of registered voters cast ballots at the last election.

Early polling for reasons of travel or work began two weeks ago and the Australian Electoral Commission will continue collecting postal votes for another two weeks.

The government changed regulations on Friday to enable people recently infected with COVID-19 to vote over the phone.

Electoral Commissioner Tom Rogers said more than 7,000 polling stations opened as planned and on time across Australia despite 15% of polling staff falling sick this week with COVID-19 and flu.

"If we get a clear outcome today then whoever is prime minister will be on a plane to Tokyo on Monday, which isn't ideal, I've got to say, immediately after a campaign," Albanese said.

Analysts have said that Morrison left the election until the latest date available to him to give himself more time to reduce Labour's lead in opinion polls.

At the last election in 2019, the split of votes between the government and Labor was 51.5% to 48.5% -- the exact opposite of the result that Australia's five most prominent polls had predicted.

Scotiabank is putting its Hockey Canada sponsorship on ice. The financial institution said Tuesday the pause will last until it's confident the right steps are taken to improve the culture within the sport.

With the overturning of Roe v. Wade opening the door to abortion bans in the U.S., Canadian Tiktokers are welcoming Americans who are considering travelling north of the border to get an abortion.