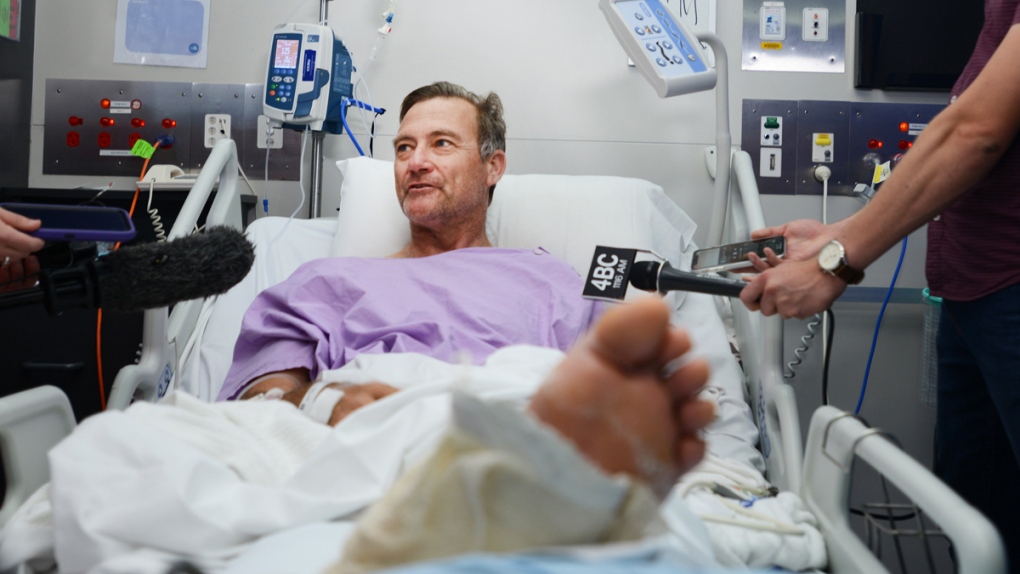 Australian bushwalker, Neil Parker, speaking to the media from a hospital bed after being stranded on Mount Nebo for two days. (source: PA Hospital Media & Communication)

(CNN) -- An experienced Australian hiker crawled for two agonizing days, carrying his broken leg, to find help after falling down a waterfall during a solo mountain hike.

Neil Parker, 54, was hiking on Mount Nebo, northwest of Brisbane, on Sunday when he tumbled six meters from the top of a waterfall, fracturing his leg and wrist.

Parker splinted his shattered leg with hiking sticks before crawling for two days to find a clearing, where he hoped he would be spotted by emergency services.

"I had to carry my leg, and it was very heavy," he told reporters from a hospital bed on Wednesday. "I had a bandage on my elbow so I could use my elbow and scrambling, lifting, inch by inch."

The seasoned hiker said that he had to move slowly because of the immense pain. "I was constantly struggling... I got about a meter and a half each time each time before I had to stop and take a break," he said.

For two days, he barely slept but drank water from a creek and had some food supplies. The weather at Mount Nebo was largely clear during his ordeal, with daytime temperatures around 31 degrees Celsius, falling to as low as six degrees overnight.

Parker said thoughts of his family kept him going -- no one knew where he was and he worried that in the dense bush he would never be found.

"I was getting very emotional thinking it's not a nice way to die laying here waiting, waiting. I just thought I'd hope to go to sleep and I wouldn't wake up again."

A rescue helicopter eventually saw him on Tuesday afternoon. Tied to a stretcher, he was winched on board and flown to a hospital for treatment, the Queensland Government Air Service posted on Facebook.

"(The) first thing I thought of (when rescued) is I'm not going to die out here, I'm going to live and it's all through what I've been trained to do, what I've learned and the experience people have given me that made a difference."

Parker is an experienced guide with the Brisbane Bushwalkers Club, which promotes hiking in the Australian state of Queensland.

Stephen Simpson, who heads the club, told CNN that Parker had been a "trained leader" with the club for seven years. He said that Parker was "very capable and competent," but did not follow club guidelines when he ventured to the mountain by himself on Sunday.

"Normally, we recommend walking with a minimum of four people," Simpson said, as that would allow the team to have enough people to stay with the injured person while also seeking outside help.

Parker said he had only intended to go out for three hours to assess the walk -- he had no idea it would turn into two days.

Simpson said as soon as the club heard that one of its members was missing it arranged a search party in the mountain. "The fact that he has been found alive after 48 hours -- which is a long time -- is worth celebrating," he added.

Simpson advised future hikers that they should always inform someone where they plan to go, and carry navigation equipment to reduce the risk of getting lost.

Lying on a hospital bed, Parker agreed that hikers should avoid the mistake of going hiking alone.

"Preparation is the key, knowing and understanding what the terrain is," Parker said. "But there are sporting activities you should never do by yourself."