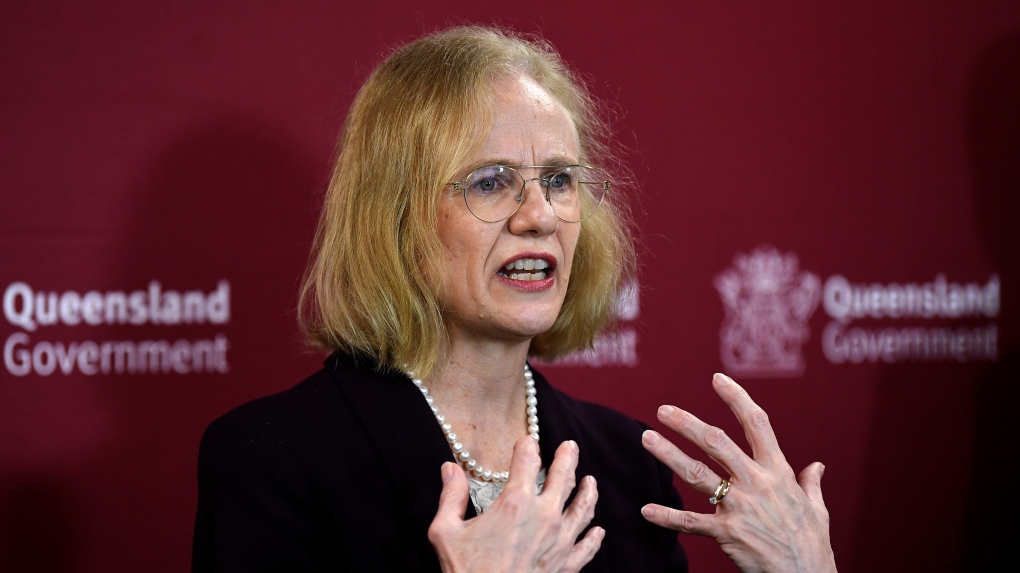 CANBERRA, AUSTRALIA -- An Australian health official revealed Monday that she has been under police guard because of death threats and growing public anger over pandemic border restrictions.

Queensland state Chief Health Officer Jeannette Young said she now travelled with a police escort because of the threats.

"Every single person in our community in Queensland has had to give up an awful lot and we can't see a clear end to this so we're going to all have to work this through together," she added.

The Queensland state government has been under mounting criticism for making travellers spend two weeks in hotel quarantine when they cross the state border from other parts of Australia. The restrictions have led to a number of high-profile incidents, including one last week in which a woman was not allowed out of quarantine to attend her father's funeral.

Queensland Premier Annastacia Palaszczuk blamed Young for that case, which the national government used to ramp up pressure on the state government to relax its border restrictions.

The woman, Sarah Caisip, had wanted to reach her father's death bed but didn't get a permit to travel from her home in Canberra until two days after he died. Canberra has not had a coronavirus case in more than two months.

Prime Minister Scott Morrison had made a personal appeal to Palaszczuk on the day of the funeral for Caisip to be allowed to attend, an approach that the state premier described as "intimidation" and "bullying."

Brisbane lawyer James Stevens took up the campaign again Palaszczuk on Sunday by paying for a plane to fly to state capital Brisbane from neighbouring Gold Coast towing a banner that said: "SHE IS HEARTLESS."

Stevens said he was prepared to fly the banner every week until Palaszczuk's government seeks re-election on Oct. 31.

"I'm not political," Stevens said from a Brisbane hotel room where he is in quarantine following a trip from Sydney. "But this has got to stop."

"She has exhibited a real callousness, a cold-hearted attitude to people's suffering and problems," Stevens said.

Public anger also focussed last week on the case of Brisbane cancer patient Mark Kearns. The 39-year-old's sister, Tamara Langborne, said the family had been told last week that only one of his four children would be allowed to cross the border from New South Wales to visit him.

His mother Rhonda Langborne said Queensland health authorities had since relented. Kearns' children, their mother, his siblings and parents would all be allowed to cross the border next weekend.

They would all be held in hotel quarantine except when they visit Kearns while wearing full personal protective equipment.

Home Affairs Minister Peter Dutton has argued that Queensland's tough restrictions are not based on medical advice but are aimed at making political gains for the state government ahead of next month's election.

He has been critical that Hollywood actor Tom Hanks has been allowed to quarantine in his resort of choice since he arrived in Queensland last week to shoot a movie at Gold Coast city.

Shooting of the Buz Luhrmann-directed movie about Elvis Presley was shut down in March when Hanks, who plays the singer's manager Colonel Tom Parker, was diagnosed with the coronavirus.

Young wrote to the Australian government in June supporting the application for Hanks and another 11 cast and crew members from the United States, Britain and Italy to be allowed into the country.

"I have given exemptions for people in entertainment and film because that's bringing a lot of money into this state and, can I say, we need every single dollar in our state," she said last week, attracting criticism that her expertise was not economics.

COVID-19 vaccine only needed for front-line workers at this stage: China

Can Santa Claus still visit amid a pandemic?

Researchers illustrate the intensity of COVID-19 infections with new images

October, November to be 'tougher' with more coronavirus deaths: WHO Europe

An election without rallies or baby-kissing: New Brunswick vote a pandemic first