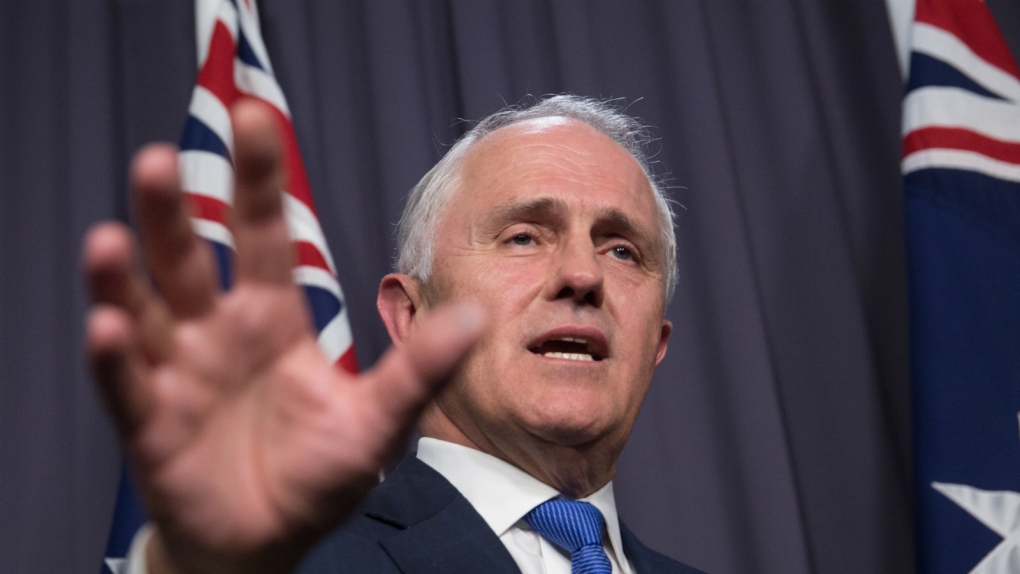 Malcolm Turnbull comments after an Australian Liberal Party meeting where he has been elected at the new party leader at Parliament House in Canberra on Sept. 14, 2015. (AP / Andrew Taylor)

CANBERRA, Australia -- Australia's new Prime Minister Malcolm Turnbull, was sworn into power on Tuesday and took charge of a bitterly divided government. He will carry the weight of expectations that he can lift public opinion, reform a flagging economy and steer the nation on a more moderate course on issues from climate change to gay marriage.

But charting a more centrist course is proving difficult to balance with holding together his riven administration and its wary right wing.

The 60-year-old former journalist, lawyer and merchant banker became Australia's 29th prime minister after his conservative Liberal Party colleagues voted 54-44 on Monday night to replace Prime Minister Tony Abbott only two years after he was elected. Turnbull's elevation has reinforced a culture of disposable leaders as the new norm in Australian politics since the 11-year tenure of Prime Minister John Howard ended in 2007.

Business groups have welcomed Turnbull's early focus on the economy as a potential boost to business confidence. Turnbull's main charge against Abbott was that he was "not been capable of providing the economic leadership our nation needs."

"We shouldn't expect too much in terms of radical policy shifts, in fact, I wouldn't expect any at all when it comes to the economy, but the fact that the prime minister ... has put the economy front and centre is very encouraging," Willox told Australian Broadcasting Corp.

Turnbull takes the reins as the economy slows and transitions away from a cooling mining boom that provides 55 per cent of Australia's export wealth and has propelled the country into its 25th year of growth. As tax revenue shrinks, a hostiles Senate has blocked key spending cuts.

Turnbull has given no indication of how sweeping his reshuffle will be when it is announced at the weekend.

Turnbull split the coalition and was voted out as party leader in 2009 over his support for the then Labor Party government's plan to make polluters pay for their carbon gas emissions through a carbon permit trading scheme.

Environmental groups have welcomed his return to power and expressed hope that his government would take tougher action on Australia's greenhouse gas emissions, which are among the world's worst on a per capita basis.

But Turnbull on Tuesday backed his government's greenhouse-gas reduction target announced last month that has been criticized for lagging behind the ambitions of most wealthy countries.

Australia has agreed on a target of curbing carbon gas emissions to at least 26 per cent below 2005 levels by 2030. The target could go as high as 28 per cent.

"The cuts that we are proposing are absolutely comparable and appropriate and in line with other comparable economies," Turnbull told Parliament. "They are very substantial cuts."

Tim Flannery, a high-profile member of the independent Climate Council think-tank, said Turnbull had little scope to bring about the greenhouse gas regulations that Australia needed.

"I count Malcolm as a friend, I have for many years, I think he's a person of integrity, but he's in a really difficult system, a system that almost makes it -- well, I won't say impossible -- but makes it exceedingly difficult," to make the changes needed, Flannery said.

Turnbull, an advocate of gay marriage, changed his view that a bill before Parliament that would allow same-sex marriage should be voted on before elections due around next September rather than let marriage equality become an election issue.

Turnbull told Parliament on Tuesday that he now agreed with the government's position that the same-sex marriage issue should be decided by the public with a direct vote if his government is re-elected. Electoral officials estimate that such a plebiscite would cost 158 million Australian dollars ($122 million).

"The objective is to ensure that Australians can make an honest conscientious decision," he said.

"It is a historic day," Croome said. "For the first time in Australian history, we have both a prime minister and an opposition leader who are in support of marriage equality."

Opinion polls show that Turnbull is far more popular among voters than Abbott. But many of those who prefer Turnbull voted for the centre-left Labor Party. Turnbull is less appealing to conservatives.

Recent years have seen a merry-go-round of leaders. The Liberals were elected in 2013 as a stable alternative to the then-labour government. Labor came to power under Kevin Rudd at elections in 2007, only to dump him for his deputy Julia Gillard in 2010 months ahead of elections. The bitterly divided and chaotic government then dumped Gillard for Rudd just months before the 2013 election.

With five prime ministers in five years, business investment in Australian was at risk because of a lack of policy stability that changing leaders created, he said.

Turnbull too could be dumped before the next election if the government was not in a winning position.

"You can see how difficult it's going to be for Turnbull. Basically his party has split in half," Tormey said. "It's not good for the country, it's just not good governance. It's really a hopeless state of affairs."