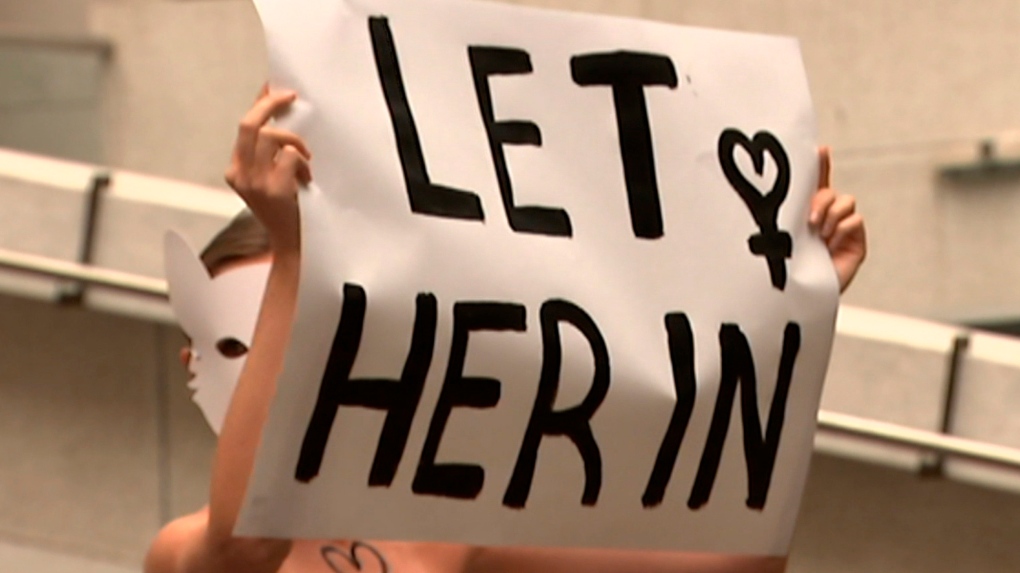 In this image made from video, a woman protester marches with a sign outside the building housing the Saudi consulate in Sydney, Thursday, Jan. 10, 2019. (Australia Broadcast Corporation via AP)

BANGKOK -- Australia's foreign minister praised Thailand on Thursday for its handling of a young Saudi woman who fled her family to seek asylum in Australia, but also reminded it of continuing concern about a Bahraini soccer player granted asylum in Australia who remains in Thai detention.

Marise Payne met with senior Thai officials in Bangkok a day after Australia announced it would assess the request for asylum by 18-year-old Rahaf Mohammed Alqunun, who was stopped Saturday at a Bangkok airport on her way to Australia and her passport seized. She said she was fleeing abuse by her family.

She quashed speculation that Alqunun might accompany her back to Australia, "because there are steps which are required in the process which Australia, and any other country considering such a matter, would have to go through."

Confined to an airport transit hotel, Alqunun conducted an online appeal for help, garnering tens of thousands of followers on Twitter and enough public and diplomatic support to convince Thai officials to admit her temporarily under the protection of U.N. officials. The office of the U.N. High Commissioner for Refugees quickly deemed her a legitimate refugee.

Alqunun's case has highlighted the cause of women's rights in Saudi Arabia. Several female Saudis fleeing abuse by their families have been caught trying to seek asylum abroad in recent years and returned home. Human rights activists say many similar cases have gone unreported.

She has attracted interest worldwide, particularly in Australia. In downtown Sydney on Thursday, four women dressed in jeans and calling themselves the Secret Sisterhood held a topless protest outside the building housing the Saudi Consulate, calling on Australia to grant Alqunun residency.

Alqunun's father arrived in Bangkok on Tuesday, but his daughter refused to meet with him. Thailand Immigration Police chief Lt. Gen. Surachate Hakparn said the father -- whose name has not been released -- denied physically abusing Alqunun or trying to force her into an arranged marriage, which were among the reasons she gave for her flight.

Surachate said Alqunun's father wanted his daughter back but respected her decision. Surachate described the father as being a governor in Saudi Arabia.

"He has 10 children. He said the daughter might feel neglected sometimes," Surachate said.

Payne was also asked by reporters about the case of Hakeem al-Araibi, a 25-year-old former member of Bahrain's national soccer team, who was granted refugee status in Australia in 2017 after fleeing his homeland, where he said he was persecuted and tortured. He was arrested while on holiday in Thailand last November due to an Interpol notice in which Bahrain sought his custody after he was sentenced in absentia in 2014 to 10 years in prison for allegedly vandalizing a police station -- a charge he denies. Bahrain is seeking his extradition.

She said she raised Australia's concerns about the case with Thailand's deputy prime minister and foreign minister.

"The Thai government is most certainly aware of the importance of this matter to Australia," she said. "I do note that there are legal proceedings underway in relation to Mr. al-Araibi, and Australia will continue to be in very close contact with Thai authorities in relation to this."

Al-Araibi, who now plays for Melbourne's Pascoe Vale Football Club, has been publicly critical of the Bahrain royal family's alleged involvement in sports scandals, which puts him at risk of punishment by the Bahraini government.

Al-Araibi has said he was blindfolded and had his legs beaten while he was held in Bahrain in 2012. He said he believed he was targeted for arrest because of his Shiite faith and because his brother was politically active. Bahrain has a Shiite majority but is ruled by a Sunni monarchy, and has a reputation for harsh repression since its failed "Arab Spring" uprising in 2011.

"Sheikh Salman is obligated to support Hakeem. He is obligated to do everything in his power to advocate, both privately and publicly, and to use the immense leverage that football has, with the Bahrain government, his own government, he's a Bahrainian national, and also with the Thai government to release Hakeem. The silence of the Asian Football Confederation is not just confounding, it's absolutely disgraceful," he said.