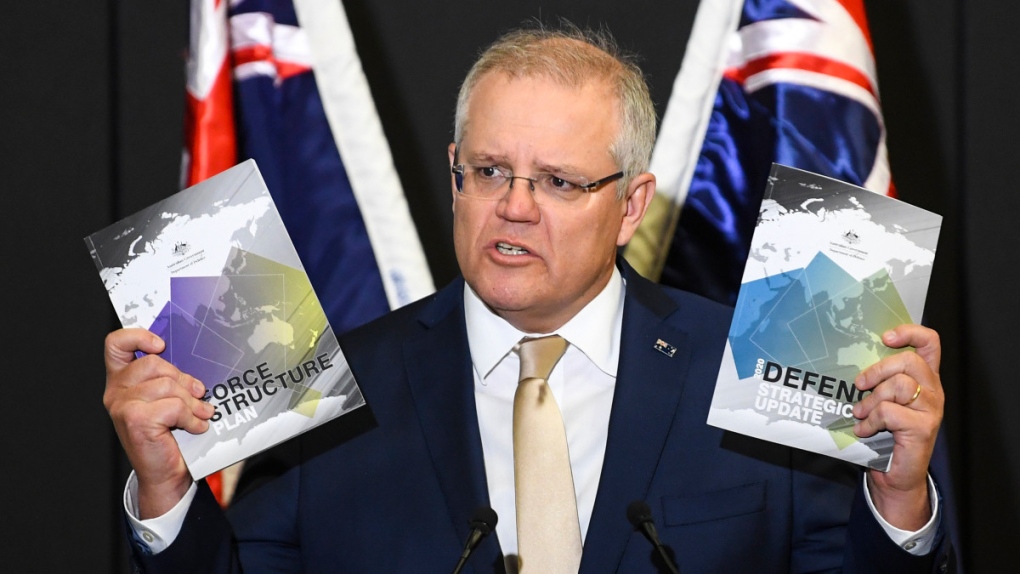 CANBERRA, AUSTRALIA -- Australia's prime minister on Wednesday announced 270 billion Australian dollars (US$190 billion) in additional defence spending over the next decade, which will include long-range missiles and other capabilities to hold enemies further from its shores.

Prime Minister Scott Morrison warned that the post-pandemic world will become more dangerous and announced a renewed focus on Australia's immediate region, although its military would be open to joining U.S.-led coalitions as it did in Afghanistan and Iraq in campaigns that were in the Australian national interest.

Australia had not seen such economic and strategic uncertainty in the region since the Second World War for reasons including tensions between the United States and China, he said.

"This simple truth is this: Even as we stare down the COVID pandemic at home, we need to also prepare for a post-COVID world that is poorer, that is more dangerous and that is more disorderly," Morrison said.

Tensions over territorial claims were rising between India and China and in the South China Sea, Morrison said.

"The risk of miscalculation and even conflict is heightened," Morrison said. "Regional military modernization is at an unprecedented rate."

"Relations between China and the United States are fractious at best as they compete for political, economic and technological supremacy," he added.

Rory Medcalf, head of the Australian National University's National Security College, said the announcement showed Australia was "getting serious about deterrence and the prospect of armed conflict in the Indo-Pacific region."

"It was only a matter of time before the Australian government made a choice about the kind of defence force that we're going to have in the 21st century with the rapid deterioration in the strategic environment in recent years," Medcalf said.

"The government has accepted that the Australian military needs to be able to attempt to deter armed conflict through its capabilities and to be able to fight in our region if we have to," he added.

Australia will invest in more lethal and long-range capabilities that will hold enemies further from its shores, including longer-range strike weapons and offensive cyber capabilities.

To increase maritime strike capability, Australia will buy the AGM-158C anti-ship missile from the U.S. Navy at an estimated cost of AU$800 million, the government said.

The new missile is a significant upgrade from Australia's current AGM-84 air-launched Harpoon anti-ship missile, which was introduced in the early 1980s. It has a range of 124 kilometres (77 miles), while the missile being purchased can exceed 370 kilometres (230 miles).

The new missile will initially be used on the F/A-18F Super Hornet jet fighters but can be used by other defence aircraft. Training on the weapon system would begin next year, the government said.

The announcement comes as Australia's relationship with China, its most important trading partner, is under extraordinary strain over Australian calls for an independent investigation of the pandemic.

The United States, Australia's most important security partner since the Second World War, remains "the foundation of our defence policy," Morrison said.

"Of course we can't match all the capabilities in our region," Morrison said. "That is why we need to ensure that our deterrence capabilities play to our strengths."

Canada Day during a pandemic: What's open and closed across the country

Trump says he thinks coronavirus is 'going to sort of just disappear, I hope'