Attacks kill at least 11 in Iraq 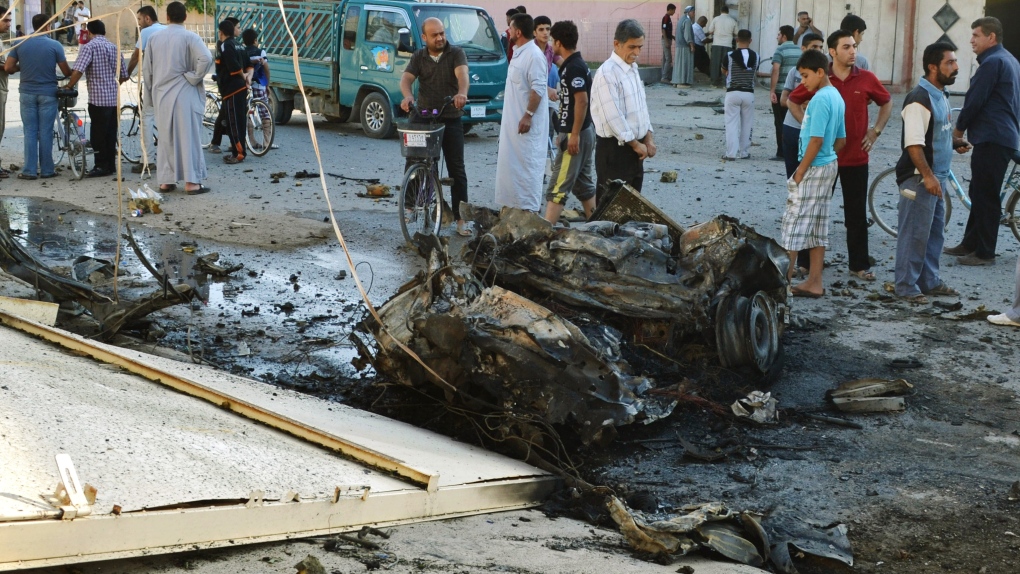 Civilians inspect the scene of two parked car bombs in the early morning at a residential area in Tuz Khormato, 130 miles (210 kilometers) north of Baghdad, Iraq, Sunday, June 23, 2013. Suicide bombers and a gunman assaulted a police station in northern Iraq on Sunday, one of several attacks across the country. (AP / Emad Matti)

BAGHDAD -- Suicide bombers and shootings in northern and central Iraq were among attacks across the country that left eleven dead on Sunday.

They were the latest incidents in a wave of violence that has claimed more than 2,000 lives since the start of April. Militants, building on Sunni discontent with the Shiite-led government, appear to have grown stronger in central and northern Iraq.

The commander of the army's 12th Division, Brig. Gen. Mohammed Khalaf, said the assault on the police station near the town of Hawija started with a gunman on foot opening fire on the guards. A suicide bomber with an explosives belt then blew himself up in the reception area, and a suicide car bomber rammed his vehicle into the building, Khalaf said. Three policemen were killed and five others wounded.

Hawija, a former insurgent stronghold, is about 240 kilometres (150 miles) north of Baghdad. The predominantly Sunni town and surrounding areas have been tense since April, when Iraqi security forces launched a deadly crackdown on a Sunni protest there in which 23 people, including three soldiers, died.

In the nearby city of Tuz Khormato, 210 kilometres (130 miles) north of Baghdad, two parked car bombs went off in the early morning in a residential area, killing one civilian and wounding 27 others, a police officer said.

Also Sunday, a mortar round hit a motel in central Baghdad, killing three civilians and wounding nine others, police said.

Qahira neighbourhood was the scene of a deadly suicide attack inside a Shiite mosque last week. At least 34 people were killed in that attack.

Two medical officials confirmed the casualty figures. All officials spoke on condition of anonymity as they were not authorized to release information to reporters.