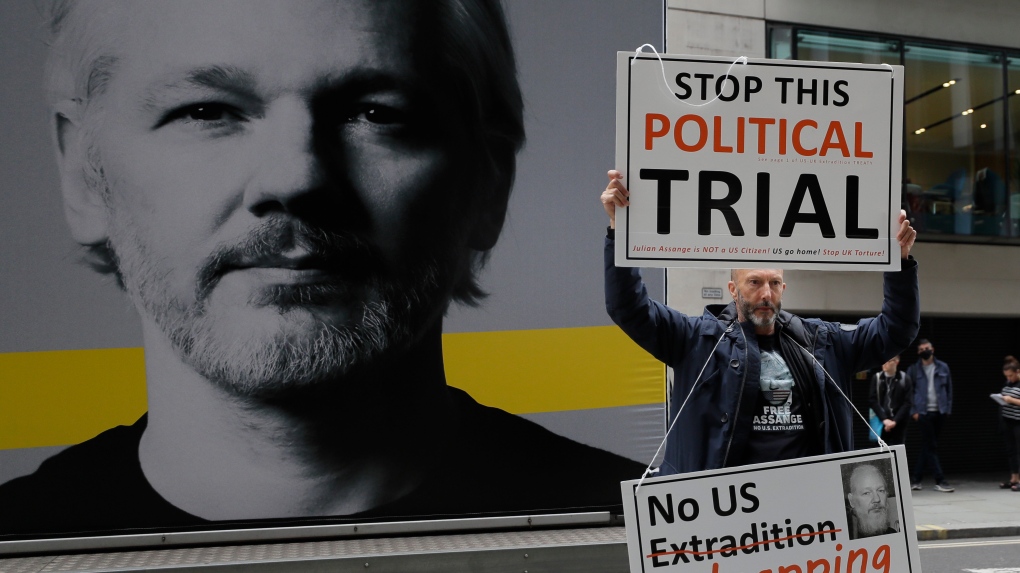 LONDON -- Julian Assange relayed how he "binge-watched" the suicide of the former Bosnian Croat general in a UN courtroom three years ago, a doctor who visited the WikiLeaks founder on several occasions while he was in the Ecuadorian Embassy in London told an extradition hearing Thursday.

Dr. Sondra Crosby, associate professor of medicine at the Boston University School of Medicine, said she noted a visible deterioration in both his mental and physical state over her four visits from Oct. 2017 to the embassy where Assange was living. He had been granted asylum by Ecuador five years earlier over fears of extradition to the U.S. related to his WikiLeaks work.

Crosby told London's Old Bailey criminal court that on a visit in February 2018, Assange had first described thoughts of suicide and how he was thinking about it "very deliberately" and that he had "binge-watched" the suicide a few months earlier of Slobodan Praljak at the International Criminal Tribunal for the Former Yugoslavia in The Hague.

Seconds after an appeals judge confirmed his 20-year sentence for war crimes during the 1992-95 Bosnian war, Praljak proclaimed his innocence and then drank from a small bottle containing potassium cyanide. He collapsed in court and died in a Dutch hospital about two hours later.

The dramatic scene of the 72-year-old former commander of Bosnian Croat military forces lifting his trembling right hand to his mouth and drinking the liquid was streamed live on the court's website.

She said Assange described how he "freeze-framed" and "analyzed" Praljak's face while he took his own life.

Assange's lawyers have argued this week that their client could very well try to kill himself if he is sent to the United States to face espionage charges, and have pointed to his deteriorating mental state during his seven-year stay at the Ecuadorian Embassy and since his ejection from there in April 2019 to a British prison.

Crosby also said that in a visit to Belmarsh Prison in London in October 2019, Assange "appeared to be severely depressed" and that he had talked about having thoughts of suicide "hundreds of times a day."

"He seemed to be in very dire straits," she said.

U.S. prosecutors have indicted the 49-year-old on 17 espionage charges and one charge of computer misuse over WikiLeaks' publication of secret American military documents a decade ago. The charges carry a maximum sentence of 175 years in prison.

Lawyers acting on behalf of the U.S. government have sought to show that Assange's mental state is not as bad as claimed by witnesses acting for the defence and that he wouldn't be subjected to improper conditions if sent to the pre-trial facilities at Alexandria Detention Center in Virginia.

It was at that facility that Chelsea Manning, the former intelligence analyst who leaking a trove of documents to WikiLeaks, tried to take her own life earlier this year. Though President Barack Obama commuted the remainder of her 35-year sentence in 2017, Manning has been in jail since May 2019 for refusing to testify before a grand jury investigating WikiLeaks.

Psychologist Nigel Blackwood, who assessed Assange at Belmarsh, rebutted defence experts on the extent of Assange's condition, saying his suicide risk was "manageable."

"I think there is some risk of suicide but that risk has to be carefully managed at Belmarsh," he said. "The risk factors are modifiable and he engages with treatment available to manage that risk."

Assange, he added, is a "very resilient and very resourceful man," who is at "the very mildest end" of the autism spectrum. Blackwood noted that Assange has been "highly functioning to a very high level in running a very successful organization."

He did say that Assange's mental health benefits from being able to have access to family and friends and recently to the Samaritans helpline in the U.K. aimed at providing support to anyone in emotional distress or thinking about suicide.

"I think there is some risk of suicide attempt linked to extradition, but not substantial risk," he told the court. "His suicide risk may increase in a much more deleterious environment without access to things that he values."

As well as arguing that extradition would pose a threat to Assange's life, his defence team say that he is a journalist and entitled to First Amendment protections for the publication of leaked documents that exposed U.S. military wrongdoing in Iraq and Afghanistan.

The extradition hearing is due to last until early October.