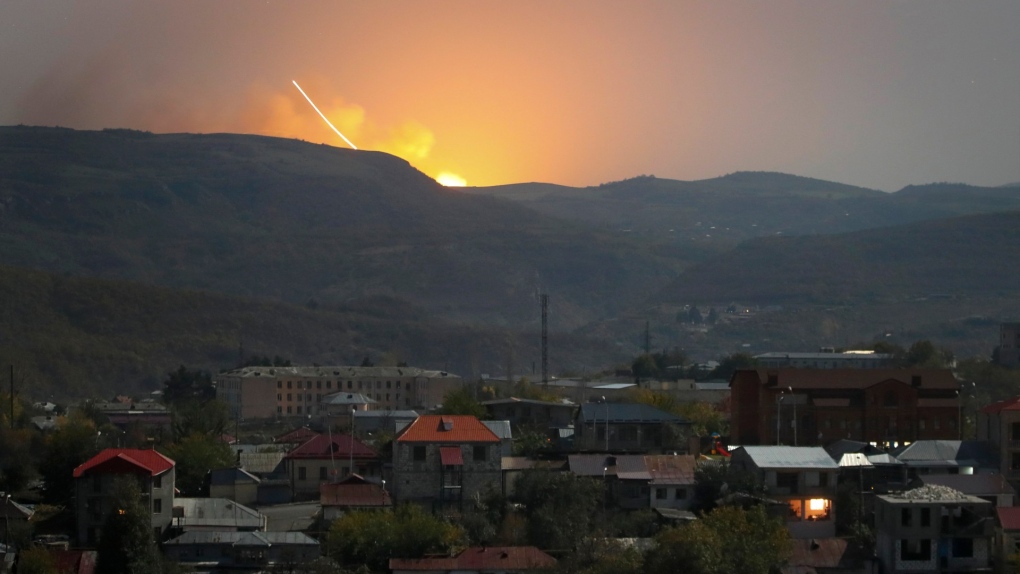 Explosions are seen behind the mountains during a military conflict outside Stepanakert, the separatist region of Nagorno-Karabakh, on Oct. 30, 2020. (AP)

YEREVAN, ARMENIA -- Armenia and Azerbaijan promised Friday to avoid shelling residential areas amid the fighting over Nagorno-Karabakh, a pledge that follows a day of talks in Geneva even as Azerbaijani troops pushed deeper into the separatist territory.

The two sides agreed they "will not deliberately target civilian populations or non-military objects in accordance with international humanitarian law." They also promised to help recover and exchange the remains of soldiers left on the battlefield and in a week's time submit lists of prisoners of war for the purpose of "providing access and eventual exchange."

The talks between foreign ministers of Armenia and Azerbaijan were sponsored by the so-called Minsk Group of the Organization for Security and Cooperation in Europe, which is co-chaired by Russia, the United States and France. The co-chairs said in a statement issued after the talks that Armenia and Azerbaijan also promised to offer their proposals regarding possible cease-fire verification mechanisms.

Nagorno-Karabakh lies within Azerbaijan but has been under the control of ethnic Armenian forces backed by Armenia since a war there ended in 1994. The latest outburst of hostilities began Sept. 27 and left hundreds and perhaps thousands dead, marking the worst escalation of fighting since the war's end.

A U.S.-brokered truce frayed immediately after it took effect Monday, just like two previous cease-fires negotiated by Russia. The warring sides have repeatedly blamed each other for violations.

During Friday's talks, co-chairs of the Minsk Group urged the sides to honour their cease-fire commitments. "The Co-Chairs will continue working with the sides intensively to find a peaceful settlement of the conflict," they said in a statement.

While the top diplomats held tense talks in Geneva, Azerbaijani forces continued pressing their offensive into Nagorno-Karabakh after more than a month of heavy fighting.

Intense clashes were going on in the south of Nagorno-Karabakh, Armenia's Defence Ministry said. The Azerbaijani military reported that areas in the Terter and Gubadli regions of Azerbaijan came under Armenian shelling.

On Thursday, Nagorno-Karabakh's separatist leader said Azerbaijani troops had advanced to within 5 kilometres (about 3 miles) of a strategically located town just south of the region's capital, Stepanakert.

In a sombre acknowledgment of Azerbaijani gains, Arayik Harutyunyan urged residents to mobilize all their resources to fend off the attack on Shushi, a town that sits on the main road linking Nagorno-Karabakh with Armenia.

"The one who controls Shushi controls Nagorno-Karabakh," Harutyunyan said, standing next to the Shushi cathedral that was badly damaged by Azerbaijani shelling earlier this month.

In Stepanakert, a group of people boarded a bus bound for Armenia to escape the fighting.

"I don't want to leave. I want to stay home in the village but they told us that we should leave," said Valya Sogomonyan, who fled her village in the Askeran region. "Azerbaijanis are shelling our village. We are leaving our house and all our things behind."

Azerbaijani President Ilham Aliyev has insisted that Azerbaijan has the right to reclaim its territory by force after three decades of international mediation have produced no result. He said that Armenia must pledge to withdraw from Nagorno-Karabakh as a condition for a lasting truce.

Azerbaijani troops, which have relied on strike drones and long-range rocket systems supplied by Turkey, have reclaimed control of several regions on the fringes of Nagorno-Karabakh and forged into the separatist territory from the south.

According to Nagorno-Karabakh officials, 1,166 of their troops and 39 civilians have been killed. Azerbaijani authorities haven't disclosed their military losses, but say the fighting has killed at least 91 civilians and wounded 400.

But Russian President Vladimir Putin said last week that, according to Moscow's information, the actual death toll was significantly higher and nearing 5,000.

Associated Press writers Vladimir Isachenkov in Moscow and Aida Sultanova in London contributed to this report.