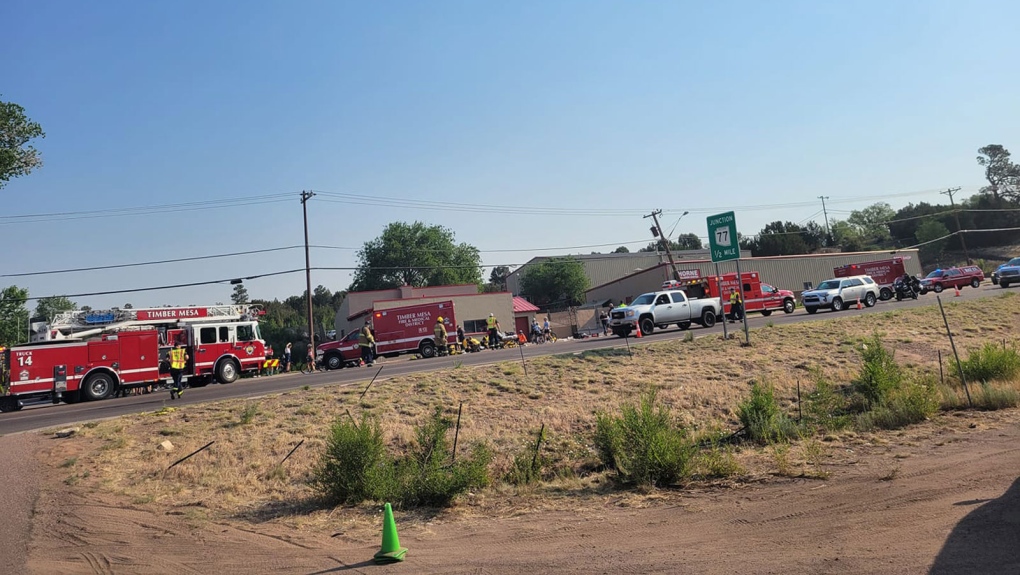 First responders on the scene of an incident in Show Low, Arizona, where police say a suspect used a vehicle to strike at least 9 cyclists on Saturday, June 19. (Timber Mesa Fire and Medical District/Facebook/CNN)

Police in Show Low, Arizona, on Saturday shot a suspect who they say struck multiple cyclists with a vehicle during a bicycle race.

According to the Show Low Police Department, seven victims were taken to the hospital, including one who was transported via air. Of the other six, four are in critical condition and two are in critical but stable condition, police said.

Another two or three victims were walk-ins at the hospital and are in stable condition, police said.

The suspect is also in critical but stable condition, police said in a news release.

According to police, a suspect in a Ford F-150 hit multiple bicyclists at about 7:25 a.m. local time during a benefit race in Show Low, a city about 180 miles northeast of Phoenix.

The suspect fled the scene and was pursued by police, who soon engaged and shot the suspect behind a hardware store.

Authorities have only identified the suspect as a 35-year-old white man.

"Our community is shocked at this incident and our hearts and prayers are with the injured and their families at this time," Kristine M. Sleighter, a spokesperson for the Show Low Police Department said in the news release.

Multiple agencies have responded to investigate, including the Show Low Police Department, the Navajo County Sheriff's Office and the Arizona Department of Public Safety, which will be responsible for the investigation related to the officer-involved shooting.

The event, known as Bike the Bluff, is a 93 kilometre benefit race to help the Mountain Christian School in Show Low, per its website. The race has multiple categories for both men and women based on age.

CNN has reached out to the race organizers for comment.