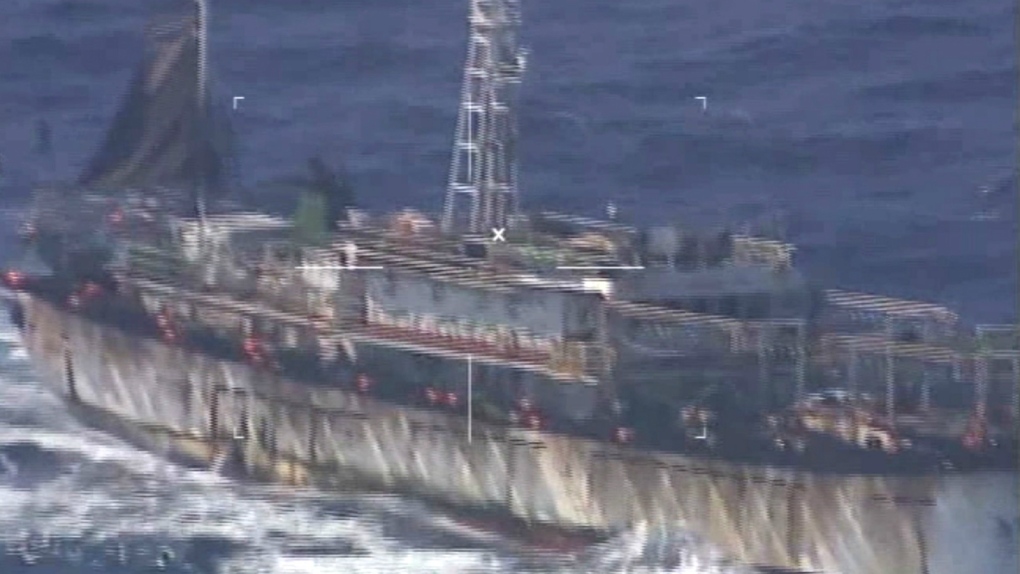 What was identified as Chinese fishing boat 'Lu Yan Yuan Yu 010' in Argentina's national waters off the coast of Puerto Madryn, Argentina in this screengrab on Monday, March 14, 2016. (Argentina's Navy)

The navy statement said the boat was intercepted Monday off the coast of Puerto Madryn, about 907 miles (1,460 kilometres) south of Buenos Aires.

The statement said the boat did not heed warning calls and instead tried to ram an Argentine naval vessel. Sailors then shot holes in different parts of the fishing boat, causing it to sink, the navy said.

Four people on board were rescued and arrested. They remained in custody and were to go before a federal judge in southern Chubut province, the statement said.

The navy said it had been 15 years since one of its vessels last sank a foreign vessel fishing illegally in Argentina's waters.

In Beijing, Lu Kang, a spokesman for the Chinese Foreign Ministry, posted a statement on the ministry's website saying the boat had been fishing in Argentine waters and was chased for several hours before Argentine naval fire holed the vessel. It said four Chinese were picked up by the Argentines and 28 more were rescued by a nearby Chinese vessel.

The statement did not directly address the question of whether the boat was fishing illegally or tried to ram the Argentine navy vessel.

"The Ministry of Foreign Affairs and the Chinese Embassy to Argentina have lodged urgent representations with Argentina, expressing serious concern, urging Argentina to carry out a full investigation immediately and to inform China of the details, to protect the safety and lawful rights of Chinese sailors, and to take effective measures to avoid similar incidents," the statement said.