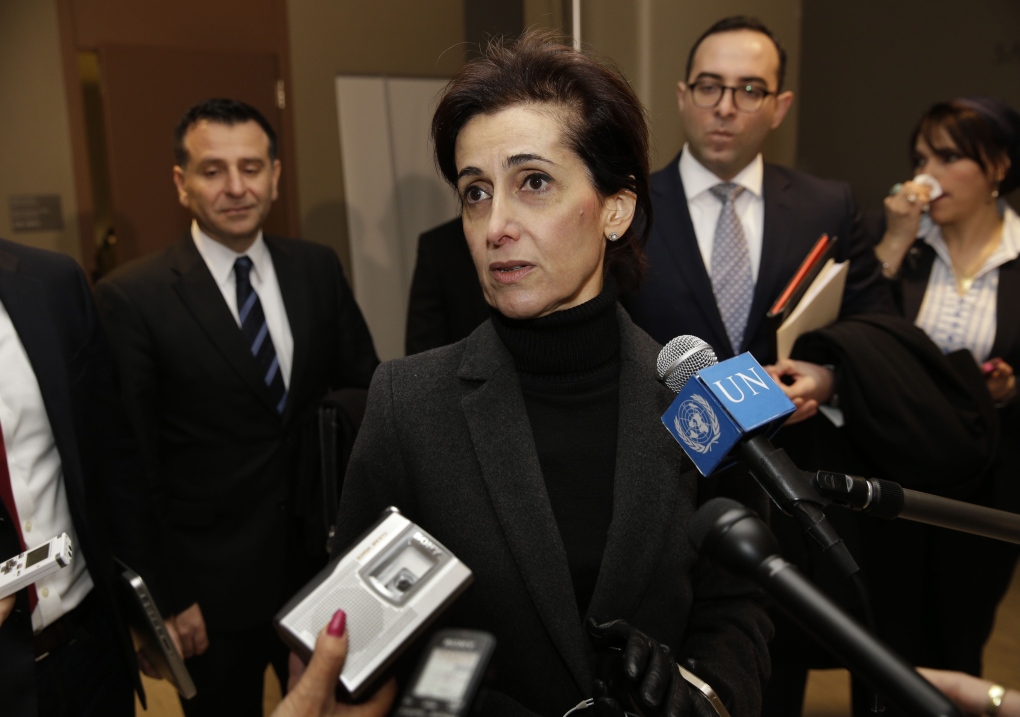 Jordanian Ambassador to the United Nations Dina Kawar arrives for a meeting of Arab states at UN headquarters, Monday, Dec. 29, 2014. Arab ambassadors are meeting to discuss Palestinian amendments to a UN resolution that would call for an end to Israel's occupation within three years. (AP/Seth Wenig)

Arab ambassadors on Monday endorsed Palestinian amendments to a UN resolution that would call for an end to Israel's occupation within three years, a proposal strongly opposed by Israel and the United States and virtually certain to be defeated.

Jordan's UN Ambassador Dina Kawar, the Arab representative on the Security Council, told reporters after the closed-door meeting of the 22 Arab envoys that the revised text would be submitted to the council later Monday.

The draft resolution, obtained by The Associated Press, affirms the urgent need to achieve "a just, lasting and comprehensive peaceful solution" to the decades-old Palestinian-Israeli conflict within 12 months and sets a Dec. 31, 2017 deadline for Israel's occupation to end.

It calls for an independent state of Palestine to be established within the June 1967 borders, with East Jerusalem as its capital, and security arrangements "including through a third-party presence." It demands "a just solution" to all other outstanding issues including Palestinian refugees, prisoners in Israeli jails and water.

Even if the resolution musters the minimum nine required "yes" votes, the United States, Israel's closest ally, is certain to veto it if necessary. The U.S. insists there must be a negotiated solution to the Israeli-Palestinian conflict.

Kawar said the Palestinian and Jordanian leaders would be contacting each other Monday "to find the best time to cast the vote in the Security Council on the amended version."

Palestinian President Mahmoud Abbas said before the Arab group met that the revised resolution would be submitted Monday and voted on Tuesday.

The Palestinian UN Ambassador Riyad Mansour told reporters after the meeting that a vote "could happen tomorrow, or the day after tomorrow." But Kawar, when asked whether the vote could be put off until after Jan. 1 said: "Everything is possible." Five newly elected members joining the Security Council on Thursday are considered more supportive of the Palestinians than the five members leaving the council and could give them the nine "yes" votes to force a U.S. veto.

U.S. State Department spokesman Jeff Rathke told reporters in Washington on Monday that the new draft resolution "is not something that we would support, and other countries share the same concerns that we have."

"We think it sets arbitrary deadlines for reaching a peace agreement and for Israel's withdrawal from the West Bank, and those are more likely to curtail useful negotiations than to bring them to a successful conclusion," Rathke said. "Further, we think that the resolution fails to account for Israel's legitimate security needs."

Israel's Prime Minister Benjamin Netanyahu said in a statement Monday that if the Security Council doesn't reject the resolution, "we will."

The Palestinian Authority is "seeking to impose on us a diktat that would undermine Israel's security, put its future in peril," he said. "Israel will oppose conditions that endanger our future."

Netanyahu said Israel expects at least "the responsible members" of the international community to vigorously oppose the resolution "because what we need always is direct negotiations and not imposed conditions."

Mansour, the Palestinian envoy, has said the Palestinians can't return "to the same cycle of failed negotiations," which he says Israel uses to entrench its occupation. He has urged international support for the resolution setting a 2017 deadline for a complete Israeli withdrawal.

The Palestinians initially circulated a draft resolution on Oct. 1 asking the council to set a deadline of November 2016 for an Israeli withdrawal from all Palestinian territory occupied since 1967. France had been working for a UN resolution aimed at restarting Israeli-Palestinian peace negotiations, setting a two-year deadline for success.