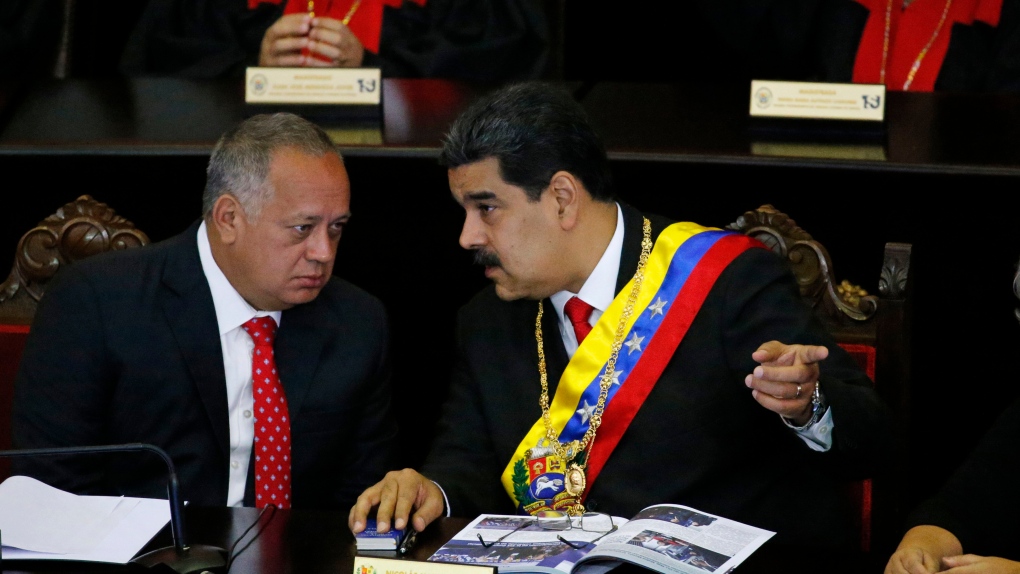 In this Jan. 24, 2019 file photo, Venezuelan President Nicolas Maduro, right, speaks with Constitutional Assembly President Diosdado Cabello at the Supreme Court during an annual ceremony that marks the start of the judicial year in Caracas, Venezuela. (AP Photo/Ariana Cubillos, File)

BOGOTA -- The U.S. has made secret contact with Venezuela's socialist party boss as close allies of President Nicolas Maduro's inner circle seek guarantees they won't face prosecution for alleged abuses and crimes if they cede to growing demands to remove him, according to a senior Trump administration official.

Diosdado Cabello, who is considered the most-powerful man in Venezuela after Maduro, met last month in Caracas with someone who is in close contact with the Trump administration, the official told The Associated Press. A second meeting is in the works but has not yet taken place.

The AP is withholding the intermediary's name and details of the encounter with Cabello out of concern the person could suffer reprisals. The official spoke on the condition of anonymity because they aren't authorized to discuss the talks, which are still preliminary. It's not clear whether the talks have Maduro's approval or not.

Cabello, 56, is a major power broker inside Venezuela, who has seen his influence in the government and security forces expand as Maduro's grip on power has weakened. But he's also been accused by U.S. officials of being behind massive corruption, drug trafficking and even death threats against a sitting U.S. senator.

The administration official said that under no circumstances is the U.S. looking to prop up Cabello or pave the way for him to substitute Maduro. Instead, the goal of the outreach is to ratchet up pressure on the regime by contributing to the knife fight the U.S. believes is taking place behind the scenes among competing circles of power within the ruling party.

Similar contacts exist with other top Venezuelan insiders, the official said, and the U.S. is in a listening mode to hear what it would take for them to betray Maduro and support a transition plan.

Cabello did not immediately respond to a request for comment.

But an aide said the U.S. has been increasingly knocking on his door, desperately looking to establish contact. The aide rejected the notion Cabello was somehow betraying Maduro, saying that Cabello would only meet with Americans with the president's permission and if it contributes to lifting sanctions he blames for crippling the oil-dependent economy. The aide spoke on the condition of anonymity because he isn't authorized to discuss political affairs publicly.

A person familiar with the July encounter said Cabello appeared savvy and arrived to the meeting with the U.S.-backed envoy well prepared, with a clear understanding of Venezuela's political problems. The person spoke on the condition of anonymity because they aren't authorized to discuss the matter.

As Venezuela's crisis grinds on, a predictable pattern has emerged where Juan Guaido, who the U.S. and dozens of other countries recognize as Venezuela's rightful leader, has been unable to woo the military and take power but Maduro lacks enough strength to apprehend his rival or rescue the collapsed economy amid ever-tightening U.S. sanctions. This month, the U.S. slapped a new round of sanctions that seizes all of the Maduro government's assets in the U.S. and threatens to punish companies from third countries that continue to do business with him.

Talks sponsored by Norway between the opposition and government have been slow-going and were suspended this month by Maduro, who accused Guaido of celebrating the U.S.' "brutal blockade." Neither Cabello, the Venezuelan military or U.S. government are a party to those talks.

To break the stalemate, some conspirators are looking to the U.S. to devise a plan to protect government insiders who turn against Maduro from future prosecution. The U.S. has repeatedly said it would offer top socialists relief from sanctions if they take "concrete and meaningful actions" to end Maduro's rule. In May, it quickly lifted sanctions against Maduro's former spy chief, Gen. Manuel Cristopher Figuera, after he defected during a failed military uprising.

As head of the constitutional assembly, Cabello has the power to remove Maduro, a position that could come in handy in any negotiated transition. But to date he's run the institution, which the U.S. considers illegitimate, as a rubber-stamping foil to the opposition-controlled congress, showing no signs of possible deception.

It's not clear who initiated the contact with Cabello. But the U.S. official said Cabello was talking behind the back of the embattled socialist despite his almost daily displays of loyalty and frequent harangues against President Donald Trump.

An opposition politician briefed on the outreach said Defence Minister Vladimir Padrino and Interior Minister Nestor Reverol are among those in indirect contact with the Americans, underscoring the degree to which Maduro is surrounded by conspirators even after an opposition-led military uprising in April was easily quashed. The politician spoke on the condition of anonymity because they aren't authorized to discuss the talks. The AP was unable to verify the opposition politician's account.

Cabello has long been seen as a rival to Maduro, someone who has more pragmatic economic views and is less ideologically aligned with communist Cuba. He sat to the right of Hugo Chavez when the late socialist designated Maduro, to his left, to be his successor in his last public appearance before dying of cancer in 2013.

By all accounts Cabello was not among the high-placed officials who were in on a plot to remove Maduro in April, when Guaido and his mentor Leopoldo Lopez appeared on a bridge in eastern Caracas surrounded by a small contingent of armed troops. Since the uprising's failure, the retired army lieutenant has seen his influence in the government and security forces expand, with the appointment of close allies to head the army and the feared SEBIN intelligence police.

He also remains popular with the Chavista base, having crisscrossed the country the past five years with a much-watched program on state TV that is a vehicle for pounding the opposition and U.S.

"A fraternal salute, brother President," Cabello said in the most-recent program, where Maduro called in as a special guest. "We have no secrets, no lies here. Every time we do something we will inform the people, so that with a clear conscience they can take informed decisions and fix positions."

The U.S. has tried to negotiate with Cabello before. In 2015, Thomas Shannon, who was then counsellor to Secretary of State John Kerry, met with Cabello in Haiti to pave the way for legislative elections that the opposition won by a landslide.

But until now, the Trump administration has shown deep scorn for Cabello, hitting him with sanctions last year for allegedly organizing drug shipments and running a major graft network that embezzled state funds and invested the stolen proceeds in Florida real estate. The U.S. also believes he discussed a plot to kill Florida Republican Sen. Marco Rubio, who has called him "Venezuela's Pablo Escobar."

"Cabello is one of the worst of the worst inside of Venezuela," said Fernando Cutz, a former senior national security adviser on Latin America to both President Barack Obama and Trump. "If the strategy is to try to negotiate with the mafia boss, he's your guy. But that's a strategy that carries some heavy risks."