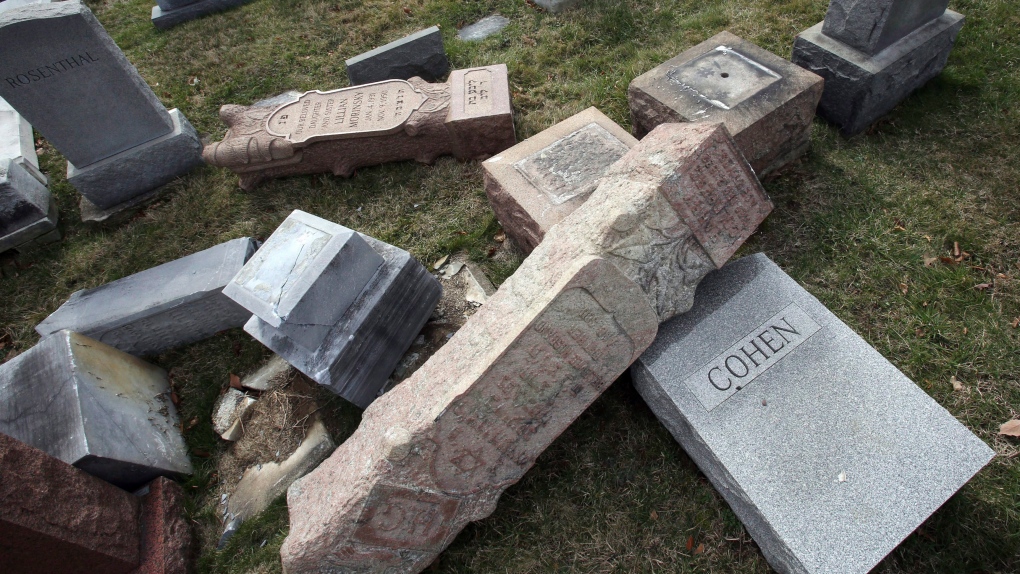 In this Monday, Feb. 27, 2017 file photo, toppled and damaged headstones rest on the ground at Mount Carmel Cemetery in Philadelphia. (AP Photo/Jacqueline Larma)

The Anti-Defamation League is reporting a 57 per cent increase in anti-Semitic incidents in the U.S. last year, the highest tally that the Jewish civil rights group has counted in more than two decades, according to data it released Tuesday.

The New York City-based organization found 1,986 anti-Semitic incidents last year, up from 1,267 in 2016. That's the highest total since 1994 and the largest single-year increase since the group began collecting this data in 1979.

The ADL said the sharp rise includes 952 vandalism incidents, an increase of 86 per cent from 2016. The group also counted 1,015 incidents of harassment, a 41 per cent increase from 2016.

ADL national director and CEO Jonathan Greenblatt said the "alarming" increase appears to be fueled by emboldened far-right extremists as well as the "divisive state of our national discourse."

"Less civility has led to more intolerance," he told The Associated Press.

Anti-Semitic incidents at schools and on college campuses nearly doubled for the second year in a row, with 457 such incidents reported in non-Jewish schools last year, the ADL report says.

"We should see this as an alarm, a very loud alarm that should get the attention of all of us," Greenblatt said.

The harassment incidents included 169 bomb threats against Jewish institutions, nearly all of them by two men. The ADL report said more than 150 bomb threats against Jewish community centres and day schools last year were allegedly made by an 18-year-old Israeli-American Jewish hacker, who was arrested in Israel last March. Separately, a former journalist from St. Louis pleaded guilty to making a string of fake bomb threats to Jewish organizations last year in the name of his ex-girlfriend in an effort to disrupt her life.

In a note about its methodology, the group said, "ADL is careful to not conflate general criticism of Israel or anti-Israel activism with anti-Semitism. However, Israel-related harassment of groups or individuals may be included when the harassment incorporates traditional anti-Jewish references, accusations and conspiracy theories. Also included are cases of picketing of Jewish religious or cultural institutions for purported support for Israel."

There were six incidents in which Jewish institutions were victims of vandalism and harassment for their purported support of Israel, Gutnick said.

Rabbi Shmuel Herzfeld, of Ohev Sholom-The National Synagogue in Washington, said neo-Nazis in the U.S. are emboldened "in a way I have not seen in my lifetime."

"It's scary," said Herzfeld, whose synagogue received a bomb threat in April. "I think there is no question that it's on people's minds, and there is more of it out there."

The ADL is urging Congress to pass legislation to expand federal protections against bomb threats to religious institutions. The legislation, approved by the U.S. House of Representatives in December, awaits action in the Senate, the ADL said.

Greenblatt also urges "all public figures" to speak out against anti-Semitism "whether you're the president of the United States or the head of the local P.T.A."

President Donald Trump was widely criticized for saying there was "blame on both sides" after violence erupted in August at a white nationalist rally in Charlottesville, Virginia, where 32-year-old Heather Heyer was killed when a man drove his car into a crowd of demonstrators. Greenblatt said Trump's statements about the rally were a "serious failure of moral leadership" and a "low point" of his presidency.

"There's no question we would love to see the president call out anti-Semitism as consistently and clearly as he does other issues," Greenblatt said.

The ADL says it compiles its incident data from news reports and information provided by victims, law enforcement and "community leaders."

"We just don't report something we've heard. We call, we check and we verify," Greenblatt said.