Another cruise ship in Norway stalled over virus case 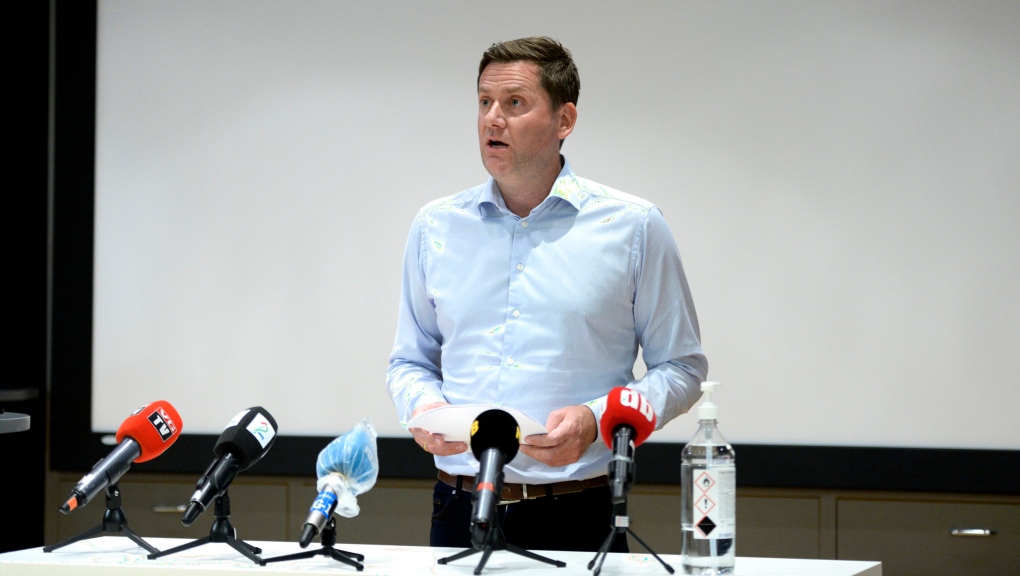 CEO of Hurtigruten, Daniel Skjeldam during a press conference after the announcement an outbreak of coronavirus infection aboard the expedition cruise ship MS Roald Amundsen. (Annika Byrde / NTB scanpix via AP)

COPENHAGEN -- A cruise ship carrying more than 200 people docked in a Norwegian harbour Wednesday and ordered to keep everyone on board after a passenger from a previous trip tested positive for the coronavirus upon returning home to Denmark.

Bodoe Mayor Ida Pinneroed told Norwegian broadcaster NRK that the SeaDream 1's 85 crew members would all be tested for the virus and that authorities were in contact with the Norwegian Institute of Public Health on whether the 123 passengers should be as well.

"We take the situation very seriously," the mayor said.

The Norway-based company that owns the ship, SeaDream Yacht Club, said the former passenger had no symptoms of COVID-19 during the earlier voyage and had travelled home from Tromsoe on Aug. 2. The person underwent a routine virus test upon arrival in Denmark and it came back positive on Tuesday.

All the other passengers from the infected individual's trip must self-isolate for 10 days, the Norwegian Institute of Public Health said.

The ship's new journey, down the Norwegian coast started on Aug. 2 in Tromsoe and stopped in Bodoe, 200 kilometres (124.3 miles) to the south.

"We sincerely hope that there is no COVID-19 on board, and we are not aware of any other guests or crew who are infected or have any symptoms, but we are taking all necessary precautions," SeaDream Yacht Club said in a statement.

Meanwhile, the number of people on another Norwegian cruise ship who have tested positive for the virus has reached 44, nine passengers and 35 crew members, the Norwegian Institute of Public Health reported late Tuesday. All nine infected passengers on the MS Roald Amundsen were registered as Norway residents.

It's not clear how that outbreak. The Hurtigruten cruise line halted all its cruise trips after the outbreak emerged and Norway on Monday closed its ports to cruise ships for two weeks. It was not immediately clear why SeaDream 1 was allowed to dock in Bodoe.

Hurtigruten's ships often act like a local ferry, travelling from port to port along Norway's west coast. Some disembarking passengers may have spread the virus to local communities.

In Russia, a river cruise ship was detained in the city of Nizhny Novgorod on Saturday after nine crew members tested positive for the coronavirus. Three of them were hospitalized, and all the passengers aboard were bused home, local authorities said.

Daria Litvinova in Moscow contributed to this story