Andrew Giuliani to meet with Trump as he preps N.Y. gubernatorial bid 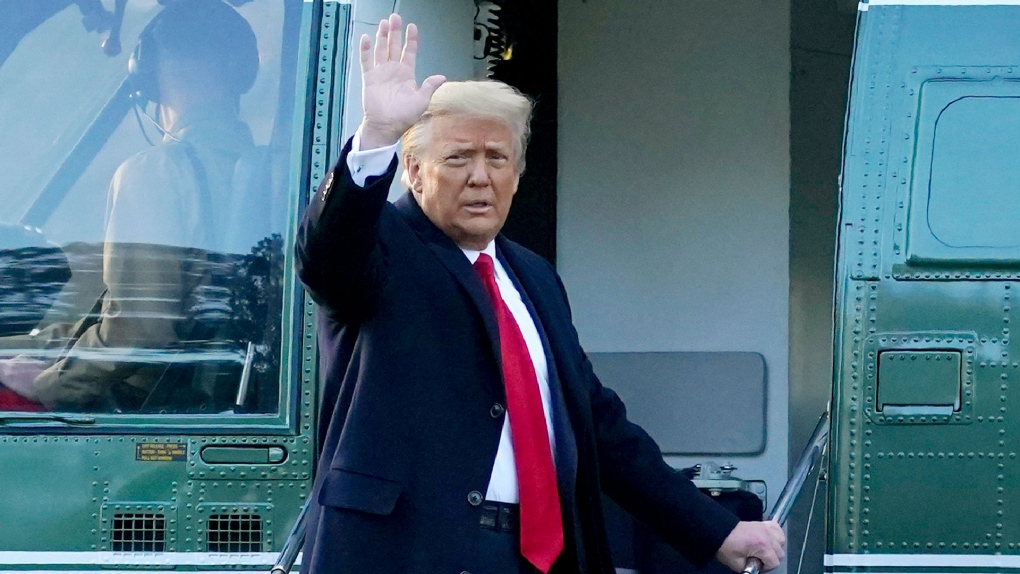 Former U.S. president Donald Trump waves as he boards Marine One on the South Lawn of the White House, Wednesday, Jan. 20, 2021, in Washington. (AP Photo/Alex Brandon)

Andrew Giuliani, the son of former New York City Mayor Rudy Giuliani and a former public liaison official inside the Trump White House, will meet with the former U.S. President at Mar-a-Lago next week as he finalizes his plans to launch a campaign for New York governor.

"I will be down there next week for a two to three-day swing where we'll be meeting with donors, interviewing potential staff and speaking to the former President," Giuliani, who has spoken with Trump three times since news of his gubernatorial ambitions first broke earlier this month, told CNN in an interview Tuesday.

"From a self-interest standpoint, I want the President to be as involved as he wants to be, but I would still advise him to keep his powder dry and not make a decision on who to support until we get to the fall or next winter," he added.

Trump's endorsement in the GOP primary, which already includes his longtime friend Rep. Lee Zeldin, could be key in what is expected to be a crowded field of candidates vying to become the first Republican to occupy the governor's mansion since 2006. The former President met with Zeldin ahead of his April 8 campaign announcement and is said to be leaning toward supporting the four-term congressman should he need Trump's help in the primary, according to two people familiar with Trump's thinking.

Zeldin, who raked in US$1 million in the first 24 hours after he announced his campaign, was endorsed on Monday by four county Republican Party chairs who said they view him as the best candidate to take on Gov. Andrew Cuomo should the Democratic leader proceed with a bid for a fourth term.

"He put out very aggressive fundraising numbers, so I think he set the pace," New York Republican Party Chairman Nick Langworthy said of Zeldin in an interview with Spectrum News. "It is now incumbent on the rest of the would-be candidates to decide if they're going to meet that pace, exceed that pace or not."

But the momentum behind Zeldin hasn't halted Giuliani's plans to toss his own hat in the ring sometime next month.

The 35-year-old ex-Trump aide, who relocated back to New York in January after splitting time between Manhattan and Washington during his White House tenure, began meeting with influential Republicans across the state last weekend to take their temperature on the race. In many of those conversations, Giuliani said he committed to visiting each of the state's 62 counties in the first month following his campaign launch.

Part of Giuliani's strategy is to infuse his campaign with Trump aides he became acquainted with during his time in the White House, including a former colleague to whom he recently offered the position of deputy campaign manager. He has already tapped Republican operative Jake Menges, who worked closely with Giuliani's father during his time as mayor, to manage his campaign and is eyeing several potential hires from the private sector.

Earlier this week, Giuliani also resigned his role as a contributor for the right-wing TV network Newsmax, which had added him and senior Trump adviser Jason Miller to its roster of paid on-air guests shortly after the ex-President left office.

"My time working in the Office of the Public Liaison helped me see how business leaders reacted to working through public policy, so I'm looking at a lot of different people from the world of finance along with some trusted people I know from the Trump White House," he said.

His campaign manager, Menges, is a former attorney and lobbyist who helped launch Keep Florida Great, a Trump-aligned super PAC, prior to the 2020 election after working as an adviser on the presidential campaign of former Housing and Urban Development Secretary Ben Carson. As recently as 2019, Menges performed consulting work for the governments of Liberia and Kosovo.

While Cuomo has yet to make a decision on whether he will seek another term -- a move potentially complicated by the recent string of sexual harassment allegations and the impeachment investigation he is facing -- the prospect of any Republican overtaking the governorship in deep blue New York next fall is widely considered improbable. Even with Cuomo mired in scandal and violent crime rates sharply rising, the state legislature remains solidly Democratic, and the state hasn't elected a Republican statewide since former Gov. George Pataki notched a third term in 2002.

Giuliani himself has never been elected to public office and could encounter resistance among some Republican New Yorkers given his proximity to Trump, whose approval rating among GOP voters in his native state nosedived following the January 6 insurrection at the US Capitol and his exit from the White House. Should he declare his candidacy next month, Giuliani will become the fourth Republican to officially join the race. Beyond Zeldin, Lewis County Sheriff Mike Carpinelli and businessman Derrick Gibson have also launched campaigns.