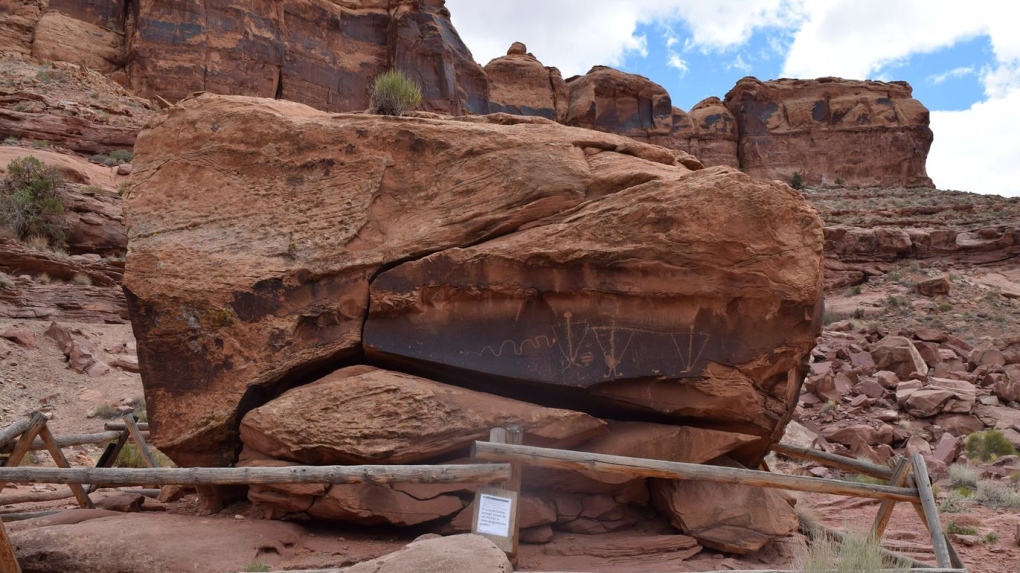 The Birthing Rock in Moab is seen after an emergency cleanup. (Photo: Facebook/Bureau of Land Management)

TORONTO -- A US$10,000 reward has been offered for information on who etched racist and offensive graffiti on the side of more than a millennia-old Indigenous rock petroglyphs in Utah.

A racist phrase, as well as other inappropriate words and images, were carved onto the side of the sandstone boulder known as The Birthing Scene or Birthing Rock in Moab.

“We treat these as holy sites, as sacred sites,” says Woody Lee, executive director of Utah Diné Bikéyah, a Native American non-profit organization.“Those are places of our ancestors.”

The sandstones, believed to include carvings from Indigenous peoples sometime between 700 and 2,500 years ago, are an important part of Indigenous culture and history.

The Indigenous etching most famously depict a woman giving birth, as well as other animals, figures and geometric patterns.

On April 27, the Bureau of Land Management (BLM) condemned the vandalism and offered a US$10,000 reward for anyone who has information that can lead to an arrest and conviction of those involved.

“Vandalism is on the rise, we’re just starting to collect systematic data on it,” says Elizabeth Hora an archaeologist who runs the Utah Public Archaeology Network, an organization that conducts research on vandalism at archaeological sites in the state.

“We’ve really been thinking a lot about motive,” Hora says. “Something like what we see at Birthing Rock is highly intentional. Someone wrote...slang, racist propaganda on a site that is well known to be of Indigenous cultural patrimony. That is something that is more rare and more harmful, more insidious.”

The sandstone has undergone initial emergency treatment to remove portions of the racist and offensive graffiti, but the repatriation process will require the work of professional conservators.

“Those sites speak to different ways of understanding relationships with the land that go long before European invasion,” says Daniel Justice, a professor of First Nations and Indigenous Studies at the University of British Columbia. “They‘re not just images, they're not just art, they actually speak to very different ways of relating to life and those ways are still really important to Indigenous communities.”

“It speaks to the everyday racism against Indigenous people, where it’s often seen as just a joke, as though nobody would really care... It’s so trivialized,” Justice says. “Anti-Indigenous racism is so everyday as to seem almost common-place... It was disgusting and disappointing but it wasn't the least bit surprising.”

As rock art on federally-protected lands, it is prohibited for the sandstones to even be touched, as natural oils from fingerprints can damage the etchings.

However, Lee says that federal protection isn’t enough to ensure that these culturally important sites are not damaged.

In their statement on the vandalism, the BLM encouraged visitors to the site to follow the “Leave No Trace” principles, which provide a framework for respecting and minimizing the impact tourism and recreational activities can have on important cultural sites and nature.

“Everytime someone scratches their name in a rock or takes a piece of charcoal and writes over it, you are leaving an indelible mark on the landscape,” Hora says. “The landscape records everything about what we do, and as an archaeologist I know that what we do is who we are. When we interact with these sites, it is a testament to later generations about who we are as a people and what our values are.”

Hora says that educating the public on the importance of archaeological sites will help protect and preserve culturally relevant artifacts.