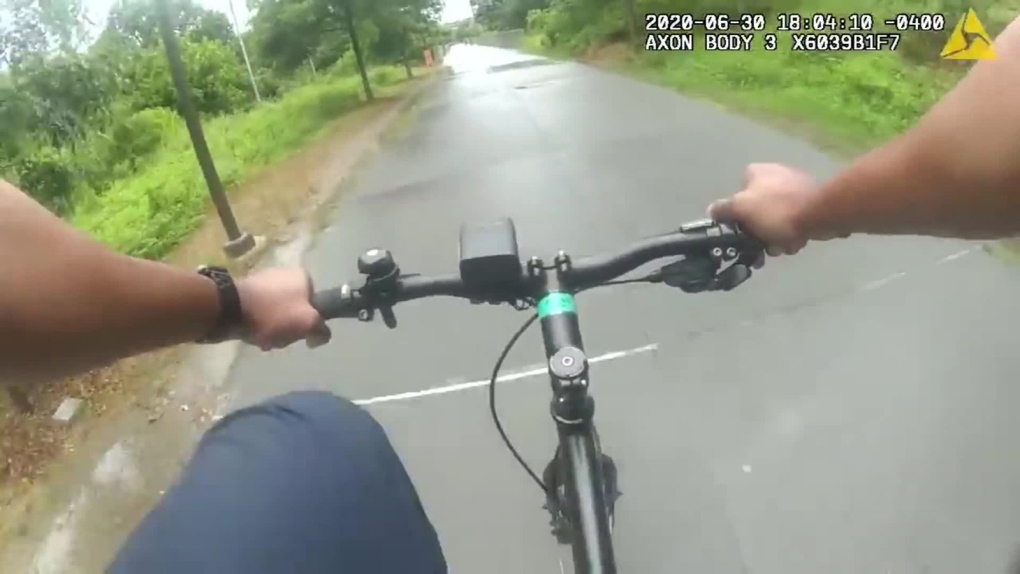 A cyclist assisted Atlanta police in the capture of a murder suspect by loaning an officer his bike for the chase. (Atlanta Police Department)

A cyclist assisted Atlanta police in the capture of a murder suspect by loaning an officer his bike for the chase.

On Tuesday, officers were canvassing an area in the city's Old Fourth Ward where a fatal shooting occurred when they spotted the suspect, according to a news release from the Atlanta Police Department.

The man immediately fled the area on a bicycle and rode onto the BeltLine, a popular multi-use trail that runs through the city, the release said.

Stephen Willard told CNN that he bicycling to his home when he noticed the police chase.

"I'm riding home from work... and the next thing I see is APD officers jogging towards me," Willard said. "The next thing I know one of the officers is waving his arms and flags me down and says, 'Hey, ma,n let me borrow your bike!' "

Willard got off his bike and handed it to the police officer.

Bodycam video the police posted online captures the officer pedaling down the BeltLine and onto busy city streets while keeping the suspect in sight. In the audio, he provides updates on the suspect's location.

After a few minutes, the officer on the bicycle pulls up to Ponce City Market, a mixed-use development. Another officer is already taking the suspect into custody.

Meanwhile, Willard had called the precinct and let the police know where he was waiting. After 30 to 40 minutes the officer returned with his bike.

"He was really excited about catching the guy, and he thanked me quite a bit," Willard said. "I said, you guys are appreciated, even though the voices are loudly denouncing you, you are appreciated."

Willard and the officer parted ways.

"It was pretty great, and it made me feel good, and everything worked out really well," Willard said. "They caught the suspect and I got my bike back in one piece."

Nicholas Fonsaca, 21, of Atlanta was arrested and charged with felony murder, according to the police. He is accused in the shooting death of a 37-year-old man on Sunday, the police said.

Fonsaca is being held at the Fulton County Jail and police told CNN that it is unknown if he has a lawyer at this time.

"We are proud of the work our investigators put into this case and proud of the efforts made by our officers in pursuing and apprehending this dangerous suspect," Atlanta Police said in a statement.

"Additionally, we are grateful for the assistance of the cyclist in loaning us his bicycle. With help from the community, we can make the City of Atlanta safer."