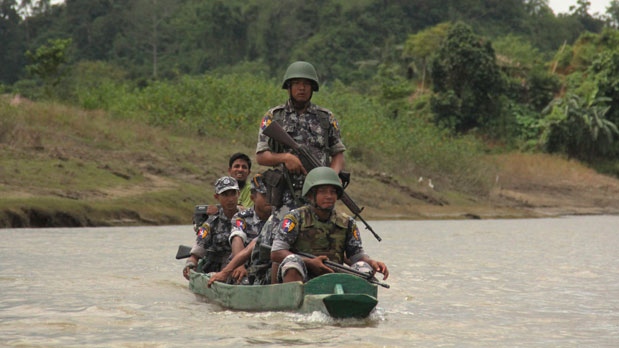 In this Friday, July 14, 2017, photo, Myanmar Border Guard Police (BGP) officers travel in a wooden boat operated by Rohingya Muslim men at Tin May village in which Myanmar government and military claim the existence of alleged Muslim terrorists in Buthidaung, Rakhine State, Myanmar.

BANGKOK -- The human rights group Amnesty International says Myanmar's military, accused of massive human rights violations against the Muslim Rohingya minority less than two years ago, is committing war crimes and other atrocities as it engages in new military operations in the western state of Rakhine.

It says in a report released Wednesday that the army has killed and injured civilians in indiscriminate attacks since January 2019 as it battles the Arakan Army, a well-trained guerrilla force from the Buddhist ethnic group seeking autonomy for Rakhine.

It accuses the military of carrying out "extrajudicial executions, arbitrary arrests, torture and other ill-treatment, and enforced disappearances."

Amnesty International says the Arakan rebels also have committed abuses against civilians, including kidnappings, though on a lesser scale.