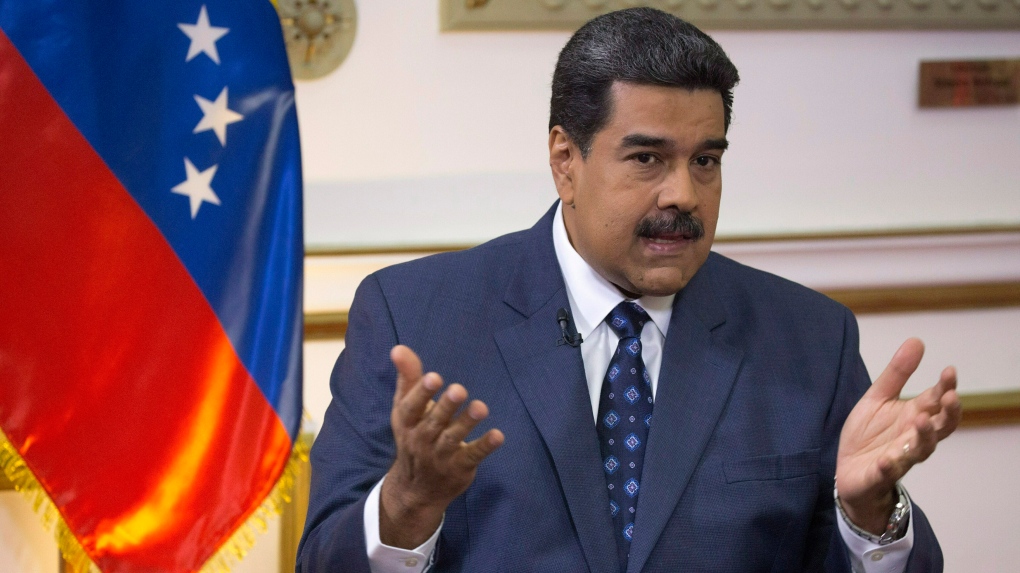 Venezuela's President Nicolas Maduro speaks during an interview with The Associated Press at Miraflores presidential palace in Caracas, Venezuela, Thursday, Feb. 14, 2019. Amnesty International is accusing Venezuelan police and forces loyal to Maduro of hundreds of human rights abuses following the start of pro-democracy protests in the last month. (THE CANADIAN PRESS/AP/Ariana Cubillos)

Amnesty accused Venezuelan police of hundreds of human-rights abuses following the start of pro-democracy protests in the last month. The abuses include 900 arbitrary detentions and six extrajudicial killings, the organization said in a statement released Wednesday.

The latest report "and many before it, outline how the despicable Maduro regime abuses and kills protesters and silences its critics," said Freeland's spokesman Adam Austen.

Amnesty says 41 people died from gunshot wounds between Jan. 21 and Jan. 25 in public protests, adding that impoverished neighbourhoods were the main targets of the abuse. It says Venezuelan authorities detained 137 children and adolescents over a 10-day period starting Jan. 21.

The report accuses the special forces of the country's national police of carrying out a campaign of political repression and social control on Maduro's behalf.

Amnesty called on the prosecutor of the International Criminal Court to consider the research as part of its inquiries into the crisis in Venezuela.

In September, Canada joined Argentina, Chile, Colombia, Paraguay and Peru in referring the situation in Venezuela to the international court.

"We have taken this significant action as a result of the numerous, credible reports alleging the commission of serious international crimes in Venezuela," Freeland said at the time.

Amnesty detailed the execution of 29-year-old Luis Enrique Ramos Suarez on Jan. 24, the day after his notice of anti-Maduro protests went viral. Masked police burst into his house and beat him in front of his family, which included six children. He was taken away and shot dead. The police shot up his house to simulate a gun battle, and tampered with the crime scene.

"As we have seen many times in Venezuela, the authorities want us to believe that those who died during the protests -- mainly young people from low-income areas -- were criminals. Their only crime was daring to ask for change and to demand a dignified existence," Erika Guevara-Rosas, Amnesty's Americas director, said in a statement.

Canada, along with the United States and dozens of countries in Latin America and Europe, recognize opposition leader Juan Guaido as the legitimate interim president of Venezuela, saying Maduro fraudulently won power in a May 2018 election.

Canada and its Western Hemisphere allies have called on Venezuela's military to switch allegiance from Maduro and support Guaido as their country's leader.

"These unconscionable acts are the very reason that Canada is playing a leading role in the defence of the rights of Venezuelans," said Austen. "Our work in the Lima Group is motivated by a desire to restore democracy and protect human rights and this work continues."

Guaido declared himself the de facto leader of Venezuela on Jan. 23, and Venezuelans filled their streets in a nationwide protest that day.

Amnesty said 770 arbitrary arrests were reported on that day alone.

The organization said it conducted research in three different Venezuelan states and areas in the capital, Caracas, between Jan. 31 and Feb. 17, collecting testimony from 50 people and documenting 15 cases that it alleges represent serious human rights violations and crimes under international law.