Will Trump's mishandling of records leave a hole in history? 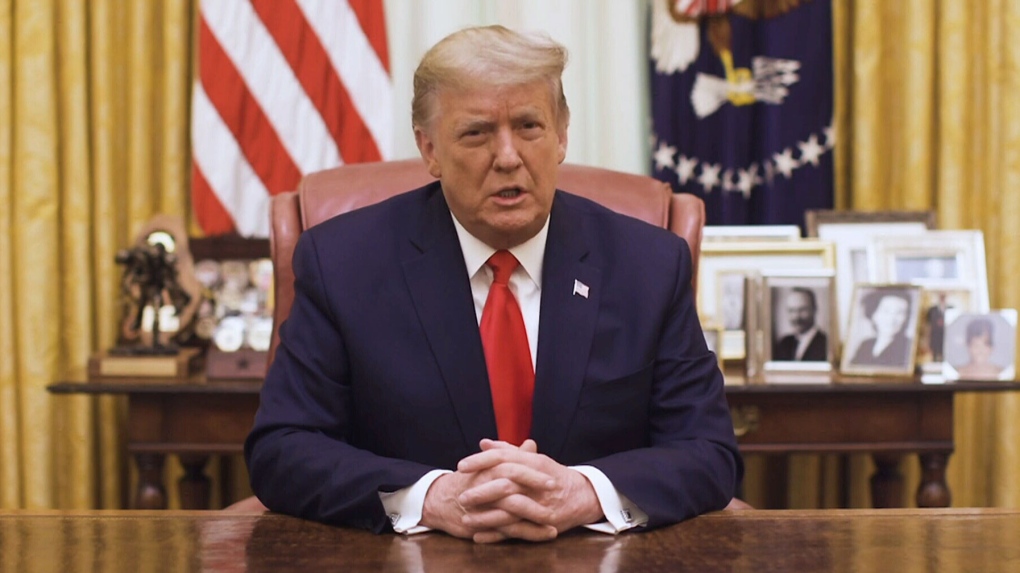 The public won't see President Donald Trump's White House records for years, but there's growing concern the collection won't be complete, leaving a hole in the history of one of America's most tumultuous presidencies.

Trump has been cavalier about the law requiring that records be preserved. He has a habit of ripping up documents before tossing them out, forcing White House records workers to spend hours taping them back together.

"They told him to stop doing it. He didn't want to stop," said Solomon Lartey, a former White House records analyst. He said the first document he taped back together was a letter from Sen. Chuck Schumer, D-N.Y., about a government shutdown.

The president also confiscated an interpreter's notes after Trump had a chat with Russian leader Vladimir Putin. Trump scolded his White House counsel for taking notes at a meeting during the Russia investigation by former special counsel Robert Mueller. Top executive branch officials had to be reminded more than once not to conduct official business on private email or text messaging systems and to preserve it if they did.

And now, Trump's baseless claim of widespread voter fraud, which postponed for weeks an acknowledgement of President-elect Joe Biden's victory, is delaying the transfer of documents to the National Archives and Records Administration, further heightening concern about the integrity of the records.

"Historians are likely to suffer from far more holes than has been the norm," said Richard Immerman at the Society for Historians of American Foreign Relations. In the Trump White House, "not only has record-keeping not been a priority, but we have multiple examples of it seeking to conceal or destroy that record."

Lack of a complete record might also hinder any ongoing investigations of Trump, from his impeachment trial and other prospective federal inquiries to investigations in the state of New York.

But even with requests by lawmakers and lawsuits by government transparency groups, there is an acknowledgment that noncompliance with the Presidential Records Act carries little consequence for Trump.

The Presidential Records Act states that a president cannot destroy records until he seeks the advice of the national archivist and notifies Congress. But the law doesn't require him to heed the archivist's advice. It doesn't prevent the president from going ahead and destroying records.

Most presidential records today are electronic. Records experts estimate that automatic backup computer systems capture a vast majority of the records, but cannot capture records that a White House chooses not to create or log into those systems.

The records of past presidents are important because they can help a current president craft new policies and prevent mistakes from being repeated.

"Presidential records tell our nation's story from a unique perspective and are essential to an incoming administration in making informed decisions," said Lee White, director of the National Coalition for History. "They are equally vital to historians."

When Trump lost the November election, records staffers were in position to transfer electronic records, pack up the paper ones and move them to the National Archives by Jan. 20, as required by law. But Trump's reluctance to concede has meant they will miss the deadline.

The White House did not respond to a request for comment about preserving Trump's records.

One person familiar with the transition said guidance typically emailed to executive branch employees explaining how to turn in equipment and pack up their offices was sent out in December, but quickly rescinded because Trump insisted on contesting the election.

With little guidance, some staffers in the White House started quietly calling records workers to find out what to do.

Departing employees are instructed to create a list of folders in each box and make a spreadsheet to give the National Archives a way to track and retrieve the information for the incoming Biden team. The process gets more complex with classified material.

The Biden administration can request to see Trump records immediately, but the law says the public must wait five years before submitting Freedom of Information Act requests. Even then, Trump -- like other presidents before him -- is invoking specific restrictions to public access of his records for up to 12 years. Six restrictions outlined in the law include national security, confidential business information, confidential communications between the president and his advisers or among his advisers and personal information.

Around Trump's first impeachment and on other sensitive issues, some normal workflow practices were bypassed, a second person familiar with the process said. Apparently worried about leaks, higher-ups and White House lawyers became more involved in deciding which materials were catalogued and scanned into White House computer networks where they are automatically saved, this person said.

The individuals, who spoke on condition of anonymity because they were not authorized to publicly discuss inner workings at the White House, said that if uncatalogued materials ended up in an office safe, for instance, they would at least be temporarily preserved. But if they were never catalogued in the first place, staffers would not know they existed, making such materials untraceable.

White House staff quickly learned about Trump's disregard for documents as they witnessed him tearing them up and discarding them.

"My director came up to me and said, `You have to tape these together,"' said Lartey, the former records analyst.

Lartey said someone in the White House chief of staff's office told the president that the documents were considered presidential records and needed to be preserved by law. Lartey said about 10 records staffers ended up on Scotch tape duty at different times, starting with Trump's first days in the White House through at least mid-2018.

Trump's staff also engaged in questionable practices by using private emails and messaging apps. Former White House counsel Don McGahn in February 2017 sent a memo that instructed employees not to use nonofficial text messaging apps or private email accounts. If they did, he said, they had to take screenshots of the material and copy it into official email accounts, which are preserved. He sent the memo back out in September 2017.

"It's an open question to me about how serious or conscientious any of those people have been about moving them over," said Tom Blanton, who directs the National Security Archive at George Washington University, which was founded in 1985 to combat government secrecy.

Trump was criticized for confiscating the notes of an interpreter who was with him in 2017 when the president talked with Putin in Hamburg, Germany. Lawmakers tried unsuccessfully to obtain the notes of another interpreter who was with Trump in 2018 when he met with Putin in Helsinki, Finland. It's unclear whether the two presidents talked about Russia's interference in the 2016 election. Many people suspected the subject did come up because at a news conference afterward, Trump said he believed Putin when Putin denied Russian interference despite U.S. intelligence agencies finding the opposite.

Several weeks ago, the National Security Archive, two historical associations and Citizens for Responsibility and Ethics in Washington sued to prevent the Trump White House from destroying any electronic communications or records sent or received on nonofficial accounts, such as personal email or WhatsApp.

They also alleged that the White House has already likely destroyed presidential materials.

The court refused to issue a temporary restraining order after government lawyers told the judge that they had instructed the White House to notify all employees to preserve all electronic communications in their original format until the suit was settled.

"I believe we will find that there's going to be a huge hole in the historical record of this president because I think there's probably been serious noncompliance of the Presidential Records Act," said Anne Weismann, one of the lawyers representing the groups in their suit. "I don't think President Trump cares about his record and what it says. I think he probably cares, though, about what it might say about his criminal culpability."

Trump faces several legal challenges when he leaves the White House. There are two New York state inquiries into whether he misled tax authorities, banks or business partners. Also, two women alleging he sexually assaulted them are suing him.

Presidential records were considered a president's personal property until the Watergate scandal under President Richard Nixon prompted Congress in 1978 to pass the Presidential Records Act over worry that Nixon would destroy White House tape recordings that led to his resignation.

After that, presidential records were no longer considered personal property but the property of the American people -- if they are preserved. Lawmakers have introduced legislation to require audits of White House record-keeping and compliance with the law.

"The American public should not have to wait until a president has left office to learn of problems with that president's record-keeping practices," Weismann said.