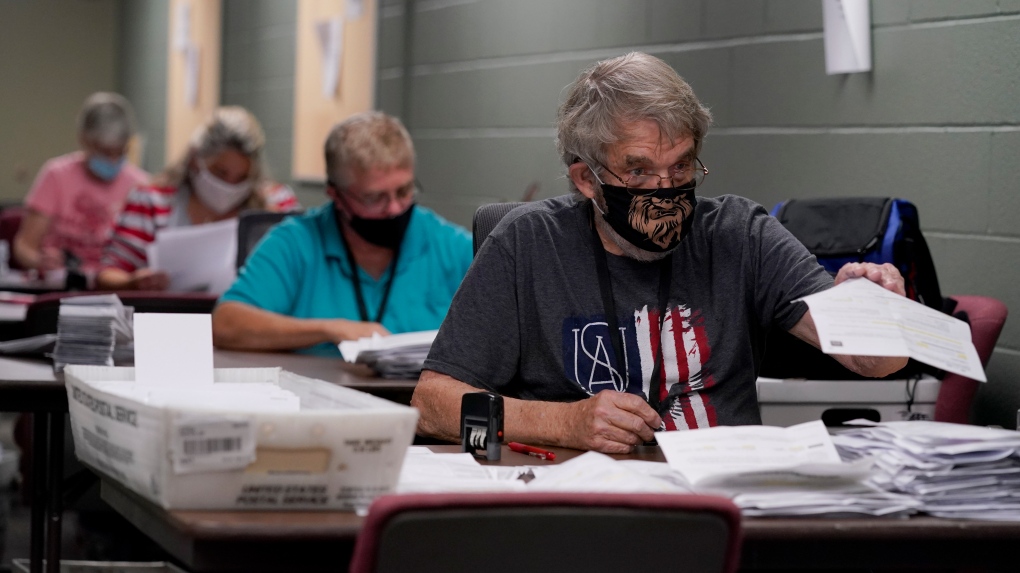 RALEIGH, N.C. -- As the pandemic prompts a surge in voting by mail, voters in a handful of states, including the presidential battlegrounds of North Carolina and Wisconsin, are facing a requirement that already is tripping up thousands -- the need to have a witness sign their ballot envelope.

A lack of a witness signature or other witness information has emerged as the leading cause of ballots being set aside before being counted in North Carolina, with problems disproportionately affecting Black voters in the state, according to an Associated Press analysis of state election data.

While there is a process for fixing the omissions, voting rights advocates say the numbers are an early warning sign that the extra step is becoming a barrier that could disenfranchise voters -- and a potential source of legal battles in a tight race.

"People are confused by this whole witness requirement," said Barbara Beckert, an advocate for Disability Rights Wisconsin, which was part of a lawsuit that unsuccessfully challenged the witness mandate. "Voting absentee is complicated. To get it right, you have to follow a lot of very specific rules."

There are early signs that voters are struggling to follow those rules. In North Carolina, over 200,000 ballots have been returned and processed since early voting began almost three weeks ago. At least 1,700 couldn't be counted because of lack of a witness name, signature or address. That number accounted for nearly half of all ballots that couldn't be accepted through Tuesday, according to State Board of Elections data.

As of Tuesday, Black voters cast 43 per cent of the ballot classified as having incomplete witness information, according to the state elections data. Yet Black voters have cast roughly 16 per cent of overall ballots returned to date.

Pat Gannon, a spokesman for the state elections board, attributed the mistakes to inexperience with the process. North Carolina is one of several states where relatively few voters cast mail-in ballots in past elections.

"Many of these voters are voting by mail for the first time and may not fully understand the requirements of the law," Gannon said.

As part of a legal settlement this week, the state board agreed to make it easier for voters to fix the issues, streamlining the process for curing ballots.

The witness requirement is relatively rare. Before the pandemic, 12 states required voters to have notary or witness signatures with their ballots. However, several changed their laws to make it easier for voters to cast ballots remotely and avoid the risk of contracting the virus, leaving the total now at eight, including Alabama, Alaska, Louisiana, Mississippi, Missouri, Oklahoma and Wisconsin, according to the Brennan Center for Justice.

A witness signature is not required in any of the five all-mail voting states in the West.

Proponents of the requirement say it's designed to prevent voter fraud by holding others accountable for vouching for a voter.

Absentee ballot applications played a prominent role in the investigation of a 2018 congressional election in the state that required a new election. Workers for a political operative in a rural county testified they were directed to collect blank or incomplete ballots, forge signatures on them and even fill in votes for local candidates. It happened during a time when North Carolina required two signatures or one notary public as a witness.

But advocacy groups say the rules unnecessarily complicate a process for older people, people who live alone and those with disabilities or chronic health problems. Several groups and Democrats are among those who have sued over rules in states with the requirement.

In Wisconsin, a federal judge this week upheld the requirement for the November election. A judge in South Carolina struck down the state's witness mandate, writing it would only "increase the risk of contracting COVID-19" for vulnerable populations. On Thursday, a federal appeals court reinstated it, at least temporarily.

In Wisconsin, where about 80% of votes cast in the August primary were absentee, voting groups are focused on coaching people on how to fill it out and educating voters in advance.

Even U.S. Sen. Tammy Baldwin, a Wisconsin Democrat, said she empathizes with the challenge.

"I live alone and I actually went outside and waited for the first person I saw walking their dog and asked if they could stop for a moment and be my witness," Baldwin said, describing her experience voting in the April presidential primary. "Imagine living in a rural community and living alone where that wouldn't an option. Or living alone and being afraid to let someone in because we're in a pandemic."

Until this week, the lack of witness information on a North Carolina absentee ballot meant the ballot was essentially cancelled, and a second ballot was sent to the voter to fill out, with a witness still required. Liberal and union-advocacy groups, bankrolled by Democratic groups to challenge absentee rules in court, argued that re-vote unfairly burdened voters during the pandemic.

Under a settlement unveiled Tuesday between the board and some plaintiffs, voters now will be able to fix the problem by returning an affidavit the voter signs affirming under penalty of a felony that they actually filled out the original ballot.

"This agreement is a victory for all eligible older voters in North Carolina," said Richard Fiesta, executive director of the Alliance for Retired Americans, whose North Carolina affiliate sued over the rules.

Republican legislative leaders are incensed by this change and others in the agreement, which they intend to oppose in court. The affidavit fail-safe essentially eliminates the witness requirement, said GOP state Sen. Ralph Hise. Democrats in charge of the state board have "rewritten election laws while the election is actively underway," Hise said.

Still, the trouble of emailing, faxing or mailing an affidavit is something voters would prefer to avoid. North Carolina's election board is highlighting the witness requirement online.

In Wisconsin, election officials in Madison also planned to be in all city parks for the next two weekends to accept absentee ballots and serve as witnesses if needed.

The North Carolina NAACP is assisting Black voters work through the process by suggesting family and friends as options for witnesses, said the Rev. C. Bradley Hunt of Greensboro, the group's political chair. The NAACP is emphasizing a can-do attitude, no matter the obstacles.

"The message to our folks is that we have to be resolute and we have to deliberate...in order to get the vote out," Hunt said.