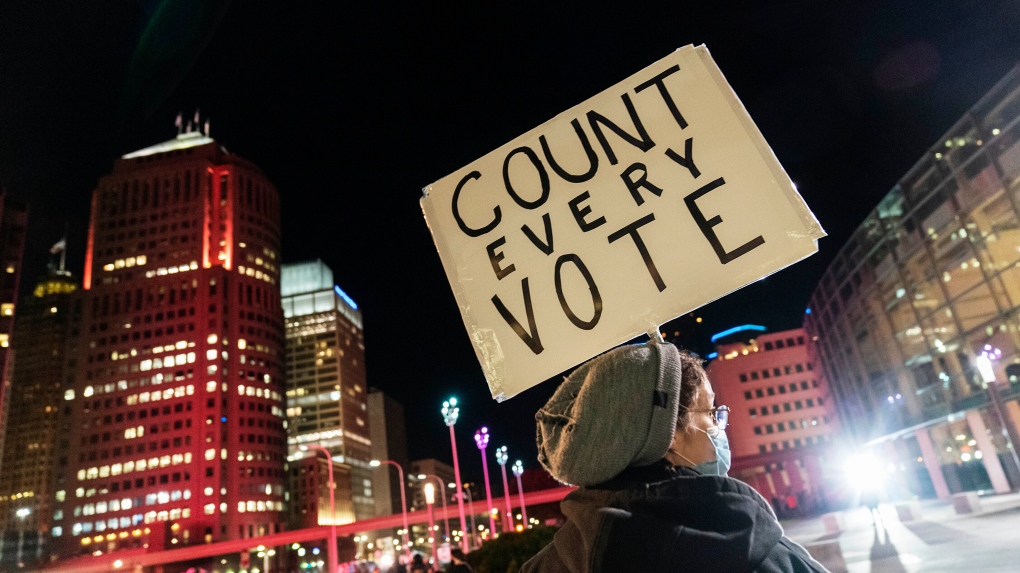 In this Nov. 4, 2020, file photo, Betsy Camardo, who supports Joe Biden, holds a sign outside the central counting board where ballots in the general election are counted in the city at the TCF Center in Detroit. (AP Photo/David Goldman, File)

U.S. President Donald Trump's frantic effort in the courts to delegitimize an election he lost has come no closer in a month to reversing any results.

Lawyers for Trump and his allies have asked judges in several states to take the drastic and unprecedented step of setting aside President-elect Joe Biden's wins. They have filed new cases and vowed to press on with appeals.

But the quantity of affidavits, lawsuits and claims made by Trump belies that they are spurious or often repetitive of arguments already rejected by judges and elections officials, some of them Republicans.

Here is a look at where the legal action stands in several key states:

A judge was holding a trial beginning Thursday brought by state Republican Party chair Kelli Ward alleging irregularities in signature verification on mail-in ballots. The judge let Ward's lawyers and experts compare the signatures on 100 mail-in ballot envelopes with signatures on file to determine whether there were any irregularities. Ward's lawyers found two problems: One person's vote for Trump was ultimately recorded as a vote for Biden, and another person's Trump vote was cancelled because the ballot had votes for both Trump and a write-in candidate.

Courts there have already dismissed four other cases. Arizona Gov. Doug Ducey, a Republican, certified Arizona's results on Monday. In a touch of symbolism, he declined a phone call from Trump while signing the certification papers. Lawyer Sidney Powell, who was recently kicked off Trump's legal team and has been pushing wild conspiracy theories about the election, has also filed a lawsuit there.

Trump has lost repeatedly in Pennsylvania, collecting a series of stinging rebukes from Republican-appointed judges. The 3rd U.S. Circuit Court of Appeals last week upheld a district judge's dismissal of a key lawsuit argued in an error-filled performance by Trump lawyer Rudy Giuliani.

The district judge, Matthew Brann, wrote of the complaint, "One might expect that when seeking such a startling outcome, a plaintiff would come formidably armed with compelling legal arguments and factual proof of rampant corruption." Brann, a member of the conservative Federalist Society, noted that the campaign did not provide that evidence.

Trump's lawyers have vowed to ask for review from the U.S. Supreme Court anyway.

Six cases brought by Trump and Republican allies in Michigan have either been rejected or dropped. On Wednesday, Giuliani appeared at a public meeting with lawmakers and urged activists to pressure, even threaten, the GOP-controlled Legislature to "step up" and award the state's 16 electoral votes to Trump despite Biden's 154,000-vote victory.

The state's Supreme Court on Thursday refused to hear Trump's lawsuit seeking to overturn his loss in the battleground state. In a divided decision, the court didn't rule on the merits of the claims but said the case must first wind its way through lower courts. Trump wants to disqualify more than 221,000 ballots in the state's two biggest Democratic counties, alleging irregularities in the way absentee ballots were administered. In urging the Supreme Court to hear the case, Trump's lawyers said they didn't have enough time to start in a lower court.

Trump's attorney Jim Troupis said he would immediately file the case in circuit court and expected to be back before the Supreme Court "very soon."

Trump's campaign filed a similar lawsuit in federal court Wednesday. Two other lawsuits filed by conservatives are still pending with the Wisconsin Supreme Court. Powell has also filed a lawsuit seeking an order to decertify the election results in the state.