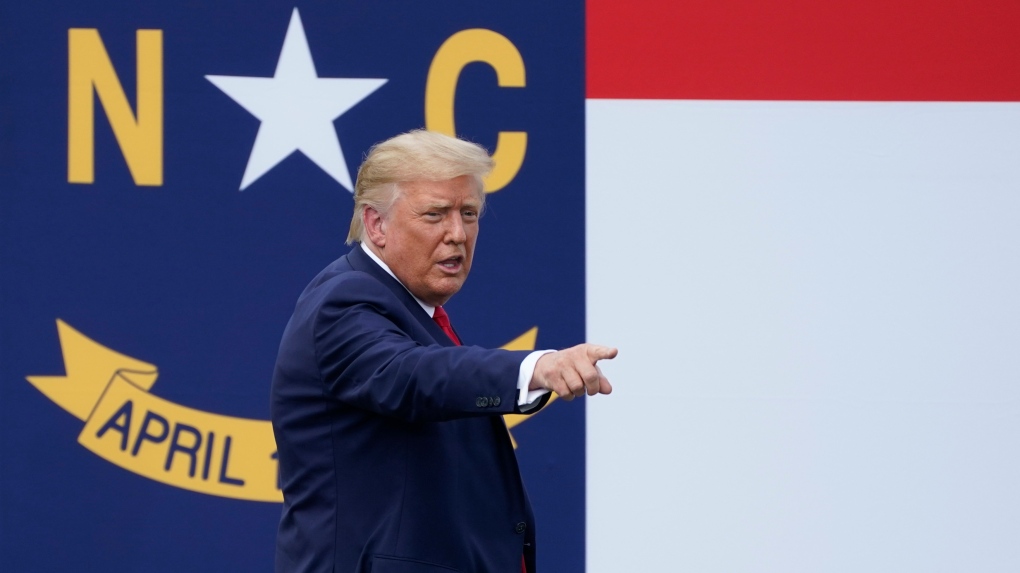 Trump stood before an iconic Second World War-era battleship to declare the port city of Wilmington, North Carolina, a Second World War "Heritage City." He pointed to a bolt of lightning and said it was God saluting the event.

He honoured war veterans, including 97-year-old Hershel "Woody" Williams, the sole surviving Marine from the war to receive the Medal of Honor. The West Virginia native fought in the Battle of Iwo Jima in the Pacific.

"He's 100 per cent sharp," Trump said of Williams, who travelled to the key battleground state with the president aboard Air Force One.

"I know a 78-year-old who's not so sharp," Trump added, a clear allusion to Biden.

White House press secretary Kayleigh McEnany had insisted earlier this week that there was no "political purpose" to Trump's visit to North Carolina. But when the president landed in Wilmington, Trump lost no time in criticizing Biden.

"This is the most important election in the history of our country. I really believe that, because we're running against people that have got some big issues," he told supporters on the airport tarmac. "They have got some big, big problems. They're stone cold crazy."

Trump also encouraged those who cast votes by mail to cast two ballots in November's election, one by mail and another in person as a check to see if the mailed vote was counted.

"They'll go out and they'll vote and they're going to have to go and check their vote by going to the poll and voting that way because if it tabulates then they won't be able to do that. So, let them send it in and let them go vote," Trump said in an interview with WECT-TV at the Wilmington airport. "And if their system's as good as they say it is, then obviously they won't be able to vote. If it isn't tabulated, they'll be able to vote. So that's the way it is, and that's what they should do."

Trump made a similar appeal in remarks to supporters at the airport. "You can't let them take your vote away; these people are playing dirty politics -- dirty politics. So if you have an absentee ballot or, as I call it, a solicited ballot ... you send it in, but I would check it, in any event, I would go and follow it and go vote," he said.

Trump won North Carolina by 3.6 percentage points in 2016, but polls are showing an extremely close race taking shape in a state that generates 15 electoral votes for its winner.

The president's visit to North Carolina comes as county boards start sending absentee ballots to voters on Friday. Vice-President Mike Pence will follow the president by visiting Raleigh on Thursday.

Through Sept. 1, more than 591,000 ballot requests had been received, compared with approximately 36,500 through the same period in 2016, the state elections board said Wednesday.

More than half of the absentee ballots, or approximately 313,000, have been requested by Democrats. Republicans have requested more than 93,000 and registered unaffiliated voters account for approximately 183,000 ballot requests.

Biden released a statement in advance of the trip saying that Trump has not provided North Carolina with the roadmap and resources needed to protect businesses, schools and families from the coronavirus.

"Instead of honouring the sacrifice of our front-line heroes, President Trump has repeatedly ignored public health guidance for political purposes," Biden said.

Wilmington has been home to the Battleship North Carolina since 1962. The ship is now a floating museum. On Sept. 2, 1945, Japan's formal surrender took place aboard the U.S.S. Missouri, anchored in Tokyo Bay.

Congress passed a bill earlier this year that included a provision requiring the secretary of the interior to annually designate one city in the United States as an "American World War II Heritage City." Wilmington is the first city to get that designation.

Trump to escalate campaigning as Biden steps up own travel