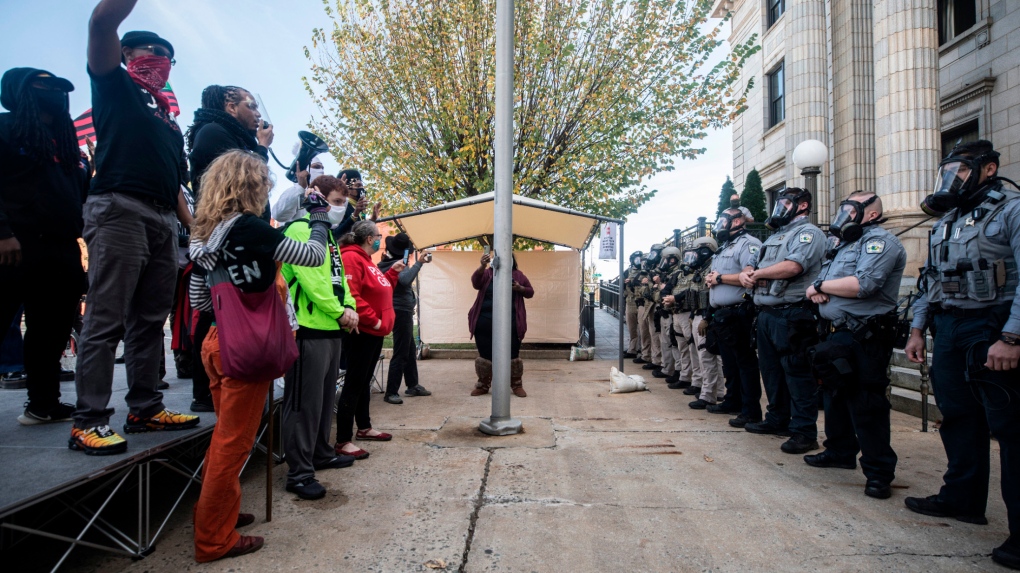 Protesters and Alamance County sheriff's deputies in riot gear face off in front of the courthouse in Graham, N.C. on Saturday, Oct. 31, 2020 before pepper spray was used and several people were arrested. (Julia Wall/The News & Observer via AP)

GRAHAM, N.C. -- The organizer of a get-out-the-vote rally in North Carolina that ended with police pepper-spraying and arresting participants is planning another march on Election Day.

The Rev. Greg Drumwright said at a news conference Sunday that he's planning a large demonstration for Election Day and condemned how police responded to Saturday's event.

"We were beaten, but we're not going to be broken," he said.

Police said participants in Saturday's rally were arrested and pepper-sprayed because they were blocking the roadway without authorization.

Graham Police said Saturday they issued several warnings to the crowd at Alamance County's courthouse to move from the roadway before releasing pepper spraying and later arresting eight people.

A press release from the department said the march organized by Drumwright didn't have permission to block traffic. Drumwright initially asked police and the Alamance County Sheriff's Office if authorities could block the roadway for the rally members, but that request was never completed because Drumwright "missed the deadline," Graham Police said.

Police said attendees paused in the roadway for about nine minutes, creating traffic back ups "in all directions around court square."

Later, police asked the crowd to disperse, giving them a five-minute warning to leave the roadway.

After the time passed, police said they released the spray toward the ground not "directly" toward any participant.

The "I Am Change" march to the polls was organized by Drumwright and began as a march from a local church to the courthouse.

Drumwright said the group was permitted to stand in the courthouse square and was escorted through the streets by the police. He also said that the group had "no intention" of having the rally in the street.

Lindsay Ayling, a graduate student and anti-racism activist who participated in the rally, told The Associated Press police used tear gas indiscriminately and without reason on the crowd, including on children.

"The police were looking for excuses to use pepper spray and arrest members of the crowd," she said.

Saturday was the last day to vote early in North Carolina, a key battleground President Donald Trump needs to win to boost his prospects of defeating Democratic nominee Joe Biden.

"Peaceful demonstrators should be able to have their voices heard and voter intimidation in any form cannot be tolerated," Cooper said on twitter.

A Confederate monument outside the Alamance County courthouse has been a local target for demonstrations since the death of George Floyd at the hands of Minneapolis Police in May. Floyd, a Black man, died after a white officer pressed his knee to Floyd's neck for several minutes.