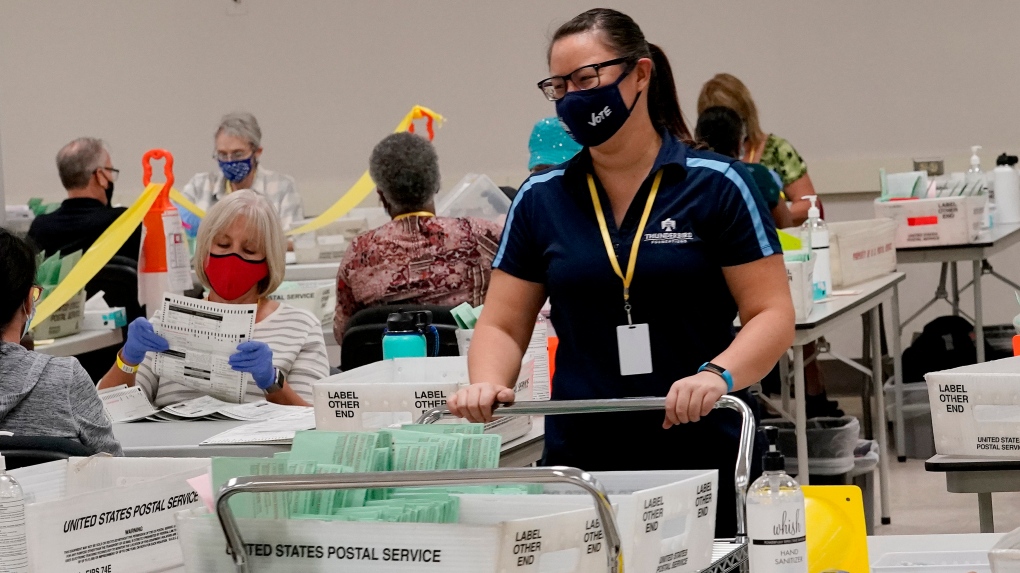 ATLANTA -- Just days before the presidential election, millions of mail ballots have yet to be returned in key battleground states, and election officials warn that time is running out for voters who want to avoid a polling place on Election Day.

At least 35 million mail ballots had been returned or accepted as of early Wednesday, according to data collected by The Associated Press. That surpasses the 33.3 million total mail ballots returned during the 2016 election, according to the U.S. Election Assistance Commission.

Yet an estimated 1.9 million ballots were still outstanding in Florida, along with 962,000 in Nevada, 850,000 in Michigan and 1 million in Pennsylvania. In most states, the deadline for ballots to be received is Election Day.

"Don't wait until Election Day," Pennsylvania Gov. Tom Wolf implored voters this week. "Hand-delivering your own ballot now will give you the peace of mind that your vote will be counted, and your voice will be heard in this historic election."

Combined with early, in-person voting, at least 71.5 million votes have already been cast, more than the total number of advance votes four years ago.

Many states made it easier to request a mail ballot this year amid the coronavirus pandemic and concerns about crowded polling places on Election Day.

One challenge has been ensuring that voters who are not used to voting absentee return their ballots in time to be counted. Compounding concerns are mail delivery delays that have persisted across the country. Delivery data from the U.S. Postal Service does not offer much assurance that these ballots will reach their destinations if they have not already been mailed.

Throughout the fall, as ballots moved through the postal system, the agency has consistently missed its goal to have more than 95% of first-class mail delivered within five days. In the week that ended Oct. 16, the most recently available weekly figures, the Postal Service reported a national on-time delivery rate of 85.5%. Postal districts in many presidential battleground states failed to reach even that mark.

The district that covers the eastern part of Michigan, which includes Detroit and its suburbs, has had one of the country's worst delivery rates -- just 71.5% of first-class mail was on-time in mid-October.

"We are too close to Election Day, and the right to vote is too important, to rely on the Postal Service to deliver absentee ballots on time," Michigan Secretary of State Jocelyn Benson said.

This year, Michigan has deployed hundreds of drop boxes across the state. The state's ballot deadline is 8 p.m. Election Day.

The same deadline holds for Wisconsin, after the U.S. Supreme Court rebuffed a Democratic effort to extend it. In the state's April primary, some 80,000 ballots arrived after Election Day.

Voters in the state appeared to be heeding the call to return ballots early, with only about 287,000 ballots outstanding out of some 1.8 million that were sent. That amounts to roughly 16% yet to be returned.

Nevada voters have more time to return their ballots, which are not due until Nov. 10 if postmarked by Election Day. There, an estimated 962,000 ballots were still outstanding as of Wednesday, although it's unlikely all those will be returned because the state decided to send a ballot to all 1.7 million active registered voters in the state. Some voters will choose to show up at the polls or just not cast a ballot.

In Florida, 4 million of a record 6 million mail-in ballots requested had been returned as of Wednesday morning. The state was on pace to eclipse the return rate of 2016, when 81% of 3.3 million requested mail-in ballots were returned.

To be counted in Florida, ballots must be received by 7 p.m. Election Day.

"We are not necessarily concerned about the number of outstanding vote-by-mail ballots, other than trying to hammer home the message that postmarks will not count, and to get them in our office by Election Day," said Danae Rivera-Marasco, spokeswoman for the Orange County supervisor of elections.

Some voters are still waiting to receive their ballots.

Abby Leafe, a registered Democrat who lives in suburban Philadelphia's Bucks County, checked her mailbox Tuesday in vain for her ballot. She hopes to vote absentee but will go to the polls if she has to.

"Making sure we have free and fair elections is worth getting COVID for," said Leafe, a 46-year-old market researcher from Newtown.

In Pennsylvania, the crush of mail-in votes is a record, more than 10 times the number received by counties in 2016's presidential election.

The current deadline for ballots in Pennsylvania to be received is three days after the election, but last-minute litigation could move that deadline to Election Day.

In most states, voters who requested an absentee ballot but did not receive one in time or decided not to return it can still show up at their local polling place on Election Day and vote. In a few states, these voters could be required to cast a provisional ballot, which will be counted after the voter's eligibility is confirmed and it's determined that they did not already cast their absentee ballot.

Large numbers of voters showing up at polling places on Election Day after requesting an absentee ballot could trigger delays and long lines. The process for checking in will take longer, and casting a provisional ballot also is more involved.

"Everything that adds time to that process is going to have an exponential effect down the line," said Lisa Schaefer, executive director of the County Commissioners Association of Pennsylvania, whose members administer elections. "So we certainly encourage anyone who's applied for a mail-in ballot to use that ballot as a safe and secure way to vote."