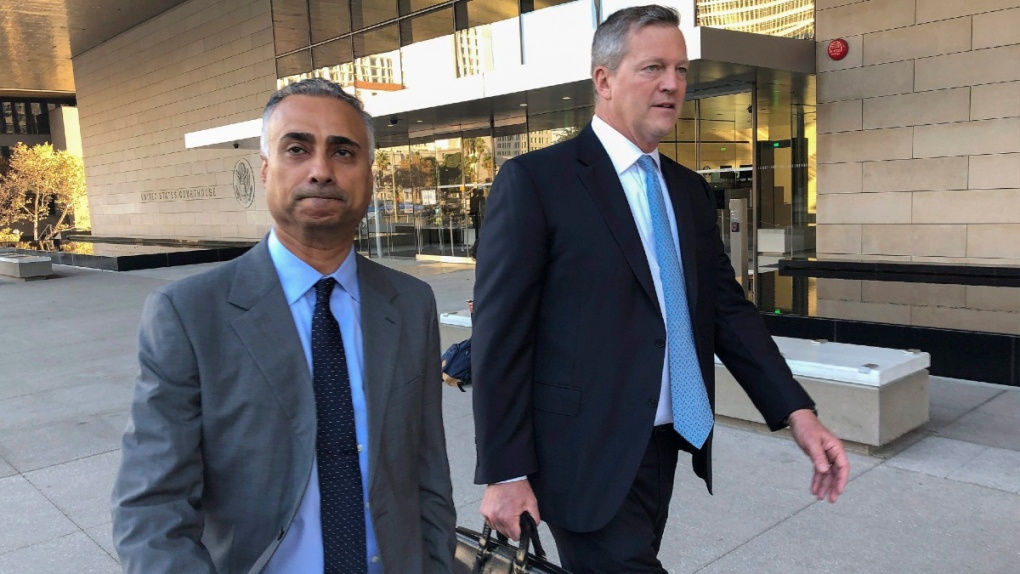 LOS ANGELES -- As an elite political fundraiser, Imaad Zuberi had the ear of top Democrats and Republicans alike -- a reach that included private meetings with then-Vice-President Joe Biden and VIP access at Donald Trump's inauguration.

He lived a lavish, jet-setting lifestyle, staying at fine hotels and hosting lawmakers and diplomats at four-star restaurants. Foreign ambassadors turned to Zuberi to get face time in Congress.

He was a charming networker and an inveterate namedropper. His Facebook account was filled with pictures of him next to the powerful and famous: having dinner with Hillary Clinton and Robert De Niro and rubbing shoulders with Trump's then-chief of staff Reince Priebus outside Mar-A-Lago. Zuberi raised huge amounts for Clinton in the 2016 election before becoming a top donor to the Trump Presidential Inauguration Committee.

But federal prosecutors say Zuberi's life was built on a series of lies and the lucrative enterprise of funding American political campaigns and profiting from the resulting influence.

"Everyone wants to come to Washington to meet people," Zuberi said in a 2015 email obtained by The Associated Press, seeking a meet-and-greet between the president of Guinea and a powerful congressman. "We get request(s) for meeting(s) from all scumbag of the world, warlords, kings, queens, presidents for life, military dictators, clan chiefs, tribal chiefs and etc."

Prosecutors describe Zuberi as a "mercenary" political donor who gave to anyone -- often using illegal straw donor cutouts -- he thought could help him. Pay to play, he explained to clients, was just "how America work(s)."

Zuberi's story underscores how loosely regulated campaign finance and foreign lobbying laws are and raises an embarrassing question: How does such a cynical fraudster find favour with so many officials at the highest levels of the U.S. government?

But the Justice Department's probe has left many unanswered questions about Zuberi's foreign entanglements and who benefited from his actions. Aside from a minor associate who pleaded guilty to a misdemeanour tax charge, no one who assisted Zuberi has been charged.

And the government has not publicly named the politicians who benefited from Zuberi's donations and did favours for him.

Taken together, they present a fuller picture of Zuberi's rapid rise and fall in politics and the cracks in the system that allowed it to happen.

The documents and interviews show Zuberi used a straw donor scheme in which he paid for others' donations with his credit cards and used cutouts that included a dead person and names of people prosecutors say he made up. The Justice Department said Zuberi funneled nearly $1 million in illegal campaign donations, in what law enforcement officials say is one of the largest such schemes ever prosecuted.

His donations gave Zuberi first-name access to diplomats, generals, and others, particularly those in Congress who controlled foreign policy. Prosecutors say Zuberi worked for years as an unregistered foreign agent for at least a half dozen countries and officials, including a Ukrainian oligarch close to Russian President Vladimir Putin.

Zuberi also used his extensive ties to U.S. elected officials to pass on potentially useful information to foreign officials, including information related to then-Vice-President Joe Biden. He also kept in close contact with a West Coast-based CIA officer and boasted of his ties to the intelligence community.

Zuberi has secretly petitioned U.S. District Judge Virginia Phillips to credit him for law enforcement leads and intelligence he says he's provided to the federal government. He contends in sealed court records that he's given usable national security-related information, according to people familiar with the documents.

Prosecutors have asked Phillips to sentence Zuberi to at least 10 years behind bars at his future sentencing. They also want him to pay a $10 million fine and nearly $16 million restitution to the IRS.

Zuberi wants a much lighter punishment and disputes the scope of his wrongdoing. Zuberi admits he violated campaign laws by making donations in the names of others but said the amount of illegal donations is lower than what prosecutors claim.

Zuberi said he "helped facilitate" donations from foreign sources but said the federal law in that area is unclear and that he received "conflicting advice from various campaigns" about the legality of such donations. Zuberi also admits he did unregistered lobbying for Sri Lanka, but said the type of work he did for other countries and officials didn't require him to register as a foreign agent.

"The government really, really wants to make an example of Mr. Zuberi well beyond that merited by his actions," his lawyers argued in court filings.

Brendan Fischer, director of federal reform at the Campaign Legal Center, said it's impossible to know how many other access brokers in Washington are operating like Zuberi and evading detection but said it's fair to suspect there many are others.

"If Zuberi was willing to comply with the minimal, basic transparency requirements in laws and just knew more rich people who might have given more money to politicians in response to a solicitation, he might have been able to do this in a lawful way," Fischer said.