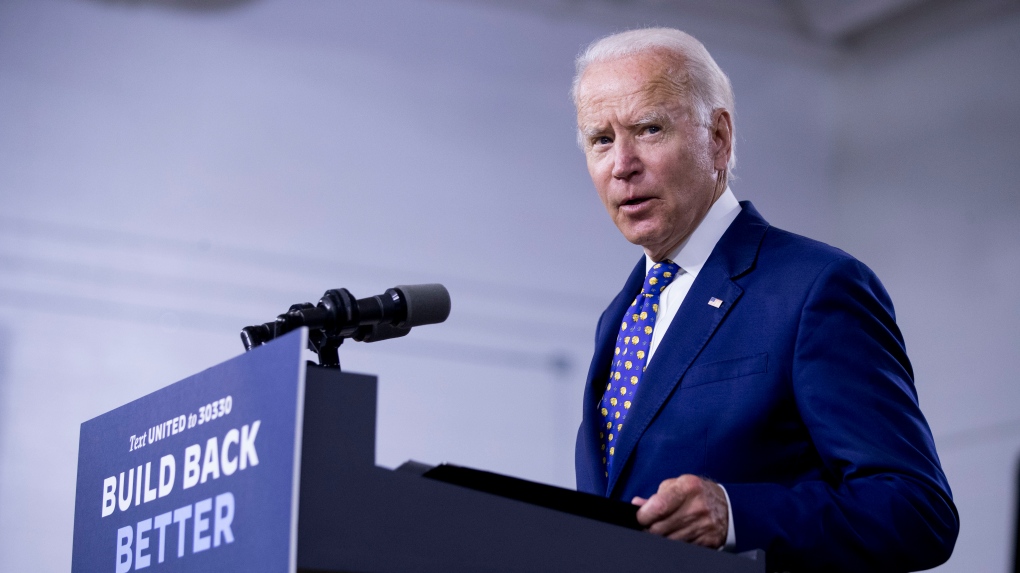 TORONTO -- Stock market investors are breathing a little easier despite potentially facing higher taxes as the possibility of a contested U.S. presidential election appears to be fading, say investment experts.

With nine days to go before election day, former vice-president Joe Biden holds a steady national lead but the gap with Donald Trump has narrowed in some battleground states, as was the case four years ago in his come-from-behind win against Hillary Clinton.

Despite key differences between the two races, Trump continues to denigrate the process and has threatened this time not to accept a loss especially if mail-in ballots take days to count.

The ensuing uncertainty about the result has rattled some investors who fear heightened market volatility with the possibility that the presidency could again be decided by the Supreme Court as was the case in 2000.

However, the odds of a contested election have receded given Biden's lead in polls.

"At one point, the numbers were a lot tighter, and this brought into question the potential for a contested or inconclusive result that would naturally bring volatility to the market," said Candice Bangsund, portfolio manager for Fiera Capital.

The election battle has taken "an emotional toll on investors" in today's hyper-political environment, said analyst Craig Fehr, who added that it's challenging for investors to separate political views from investment decisions.

While the outcome of the election matters, what drives markets over longer periods of time extends far beyond one or even several elections, the investment strategist at Edward Jones said in an interview.

"And so I think the challenge for investors is being able to pull back the political veil in which most things are viewed through these days and really focus on the things that are most important to achieving your own financial success," he said.

History shows that rarely does the outcome of an election dramatically alter the course of the economy or financial markets.

"I think it moves the course of the economy in degrees over time. But I don't think that the outcome on November 3 represents a binary outcome for the financial markets."

Market observers say some investors appear to be warming up to a Biden victory despite early concerns that his promise of higher taxes would stall market growth. Stock markets surged to record highs under Trump and are recovering from a COVID-induced correction.

Biden has said he would raise capital gains taxes and reverse part of the Trump tax cuts on high income earners. He says tax increases would apply to those earning more than $400,000 a year.

Bangsund said the increased likelihood of a "blue wave" or Democratic sweep of Congress and the White House has bolstered the case for a larger fiscal stimulus package.

"So this, in essence, has countered fears of higher corporate taxes," she said. "Stronger economic growth reverberates through the U.S. economy, the global economy and this should offset any increase on the corporate tax front."

An early fall market rally coincided with polls suggesting that Biden had built up a large lead. Fehr said that could be a reflection that markets are more comforted by reduced election uncertainty than specific policies.

The impact on various sectors will depend on who wins the presidency and the senate.

A Trump victory would mean a continuation of tax cuts, deregulation, trade skirmishes and policies that favour the oil and resources sector, banks and the defence industry.

A Biden win, coupled with control of the senate, would likely result in a larger fiscal stimulus package, a hefty infrastructure bill and policies that favour clean energy. Possible increased regulations could be felt by the banking sector.

His Buy America proposal could also impact Canadian companies that supply goods south of the border while his vow to raise the minimum wage to $15 an hour could hurt companies with a large number of lower-wage workers.

The global economy will continue to recover next year no matter who wins, but a Biden victory would propel a rotation in markets towards sectors that have underperformed in the rally, says Bangsund.

"So we want to be invested in sectors and regions of the market that benefit or that are levered to the fortunes of the economy. So the cyclical sectors such as commodities, financials, industrials -- these sectors do well when the economy is improving."

That would be beneficial for Canada, although Biden's threat to cancel the presidential permit to build the Keystone XL pipeline would be a knock on the petroleum sector.

"However, the potential for 'Buy American' provisions in government procurement would be negative for Canadian businesses hoping to win U.S. contracts and may result in a tit-for-tat reaction," said the report from Leslie Preston and James Marple.

Philip Petursson, chief investment strategist at Manulife Investment Management, says the results of an election, regardless of which party wins, don't tend to have a meaningful or long-lasting influence on the stock market.

In fact, the S&P 500 returned 14.9 per cent annually since 1945 with a Democratic president and 10.6 per cent under a Republican president, according to a Manulife report.

The technology sector that has driven the market rally since March's COVID-19 correction likely faces the largest challenge from higher capital gains taxes.

Biden has proposed taxing capital gains and dividends as ordinary income, which would almost double the tax rate for those earning more than $1 million to 39.6 per cent.

So investors would likely crystallize gains before he takes office to reduce their tax bills.

That opens up some opportunities for investors who find really attractive buys.

Still, Petursson doesn't expect large tax increases in the first year or two of a Biden administration because the economy is still in recovery.

"We're still in somewhat a fragile recovery and I don't think that the Democrats will want to do anything to try and derail that and a tax increase on corporations would be a derailment in my mind."

This report by The Canadian Press was first published Oct. 25, 2020.