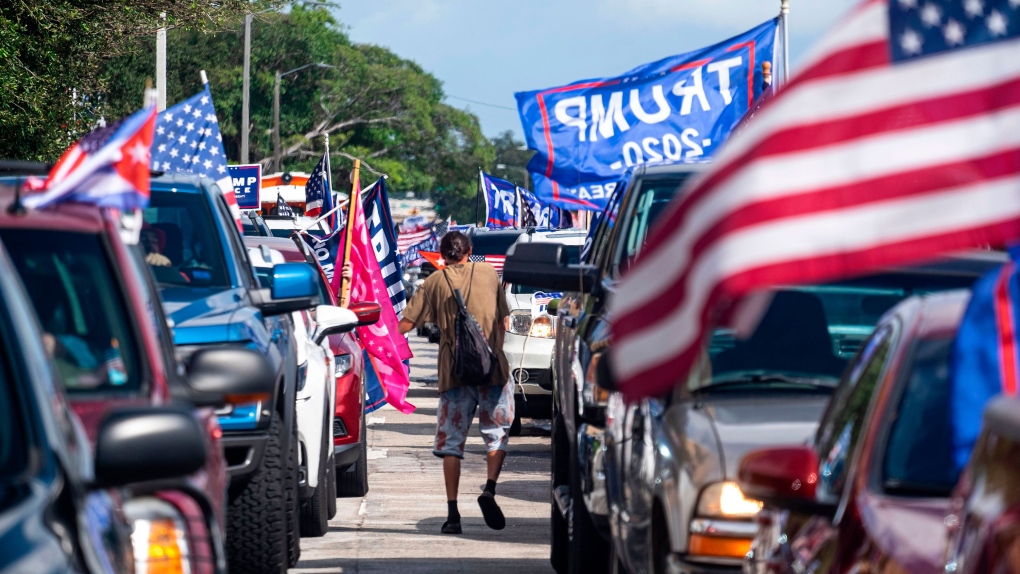 During a recent visit to Miami's Eighth Street, or Calle Ocho as locals call it, it wasn't hard to overhear older Cuban Americans talking politics at neighborhood haunts. Seated with friends at Cafe Versailles, an iconic restaurant on the main thoroughfare of the Little Havana neighborhood, Cuban-born Maria Eneida Castellanos was clear about her choice for the next U.S. president.

"I'm a trompeta," Castellanos said, using the Spanish word for trumpet. It's common lingo among local Hispanic voters who plan to cast their ballot for U.S. President Donald Trump in the November 3 election. "That's why we're here," Castellanos added, referring to her life in the U.S. "I'm Cuban. We're Cuban," she said. But in the local community, "We're American."

There's a reason Castellanos moved to the U.S. from her native Cuba decades ago. She believes the U.S. can protect her from the pitfalls of Cuba's troubled economic and political past—and that Trump's stance on issues like crime and trade will help.

Other first-generation Cuban Americans share this sentiment. "I come from a socialist country where people live very badly because of socialism." said Dayalis Gallardo, a Cuban-born immigrant walking along Calle Ocho. "That's my biggest fear and that's why I would never vote for [former vice president Joe] Biden."

Roughly 32 million Hispanics are expected to be eligible to vote in this year's U.S. presidential election. That will make them the largest minority group in U.S. presidential election history. But while Hispanic voters tend to skew more Democratic than Republican, there are signs that Trump is gaining ground over Biden, his Democratic rival, among Hispanic voters in key states like Florida.

Trump has a lot to gain from the Cuban American vote in Florida, where the group makes up about a third of the state's Hispanic vote, they turn out to vote in higher numbers, and they lean more Republican than Hispanics nationally. That's partly to do with the geopolitical forces that drove many Cuban Americans to flee to the U.S. decades ago, an experience that shaped their worldview. But there are also signs that Trump may capture more of these voters this year. His hard stance on relations with Cuba and Venezuela's embattled socialist leader Nicolas Maduro appeals to voters who still bristle at memories of Fidel Castro's communist regime.

Cuban Americans who fled from Castro and communism tend to care more about Trump's stance on economic and social issues than, for instance, his derogatory comments about immigrants, says Eduardo Gamarra, a professor of international relations at Florida International University. This is also the case for more recent arrivals like Nicaraguans and Venezuelans, who suffered under authoritarian and socialist regimes.

For Alejandro Delgado, a Cuban-American voter who landed in south Florida after fleeing the Castro regime, the issue driving his vote is not the economy, COVID-19, or even immigration. It's the perception that Biden's vision amounts to communism. "We fled communism in Cuba. We don't want to deal with that here," Delgado said. "If we want to save ourselves from socialism and communism, we have to vote for Trump."

Memories of lawlessness and corruption in their home countries make Trump's "law and order" message appealing to voters concerned about about U.S. protests over police brutality and racial injustice. "Cubans, Venezuelans, and other Latin Americans, including Colombians, have come to believe that Biden is going to destroy the police" and "create another Cuba or Venezuela," says Gamarra.

In his research on Latin American demographics, Gamarra says he's found that "when you give people the choice of law and order and more freedom, people always vote for law and order." Republicans have linked the idea of disorder on the streets to communism, he adds. These voters feel that "if Biden wins, the country will turn communist."

A HARD LINE ON CUBE AND VENEZUELA

The same logic applies to Trump's harder line toward the Cuban and Venezuelan governments. His tightening restrictions on the two regimes appeal to Cuban-American voters wary of political turmoil.

Trump's latest round of sanctions on Cuba, announced in September, ban U.S. citizens from buying Cuban cigars and rum and staying in government-owned hotels on the communist-run island. But in light of pandemic-related travel restrictions and a ban on most Americans traveling to Cuba, they may have little immediate effect.

The harder line "hasn't had an impact on Cuba, and the same [is true of] Venezuela," Gamarra says.

The Trump administration has also expanded sanctions against the government of Maduro, who secured another six-year term as Venezuela's president last year, in a process widely viewed as a sham. Trump has been vocal in his support of Venezuelans against Maduro's rule.

"The tragedy in Venezuela is a reminder that socialism and communism bring misery and heartache everywhere they're tried," Trump said at a Hispanic summit in March, adding later that "America stands with the suffering people of Venezuela, Cuba and Nicaragua and their righteous struggle for liberty."

In reality, U.S. policy toward Venezuela has changed little since the George W. Bush administration, Gamarra says. And that isn't likely to change after the election. "If Biden wins, or if Trump wins, there won't be a significant change in the U.S. Venezuela policy," Gamarra adds.

What Trump's policies have done is stoke anti-American rhetoric from the Cuban and Venezuelan regimes, which may help his efforts to woo Hispanic voters. In September, Venezuela's Maduro, who has blamed the U.S. government for domestic problems like rampant inflation and food shortages, told a group of government loyalists that Trump's latest round of U.S. sanctions "chop off [most] financing to our country" and deprive it of "the oxygen it requires to obtain food, medicine, supplies, [replacement] parts, and essential raw materials that are essential for economic activity."

Alarming messages circulating on WhatsApp and Facebook play into these fears among Hispanic voters who fled communist or socialist rule.

While the origins of these messages aren't known, there are concerns that they could have more sway with voters than paid ads on traditional media, since they circulate among trusted friends and relatives.

"Kennedy betrayed us in Bay of Pigs [Invasion in Cuba]. Are you still going to vote Democrat?" a billboard asks voters in Miami. "Trump: anti-science and anti-Dreamers," says a picture that has been circulating on Facebook. "Under Trump, we drink chlorine. Under Biden, we will drink cafecito," reads an image posted on Twitter.

Those memories of hazy information in politics breed a sense that "there's truth in every intrigue," says Gamarra. But they could cut both ways with skittish Hispanic voters. In conversations along Miami's Calle Ocho, Emilio Alvarez was one of few who identified as undecided, but leans Democrat. The Cuban-American immigrant said he was bothered by Trump's loose relationship to truth.

It's hard to believe that Trump has respect for the country's highest office, said Álvarez, when he "says things that don't have anything to do with facts."