Here are the U.S. states that postponed their primaries due to coronavirus 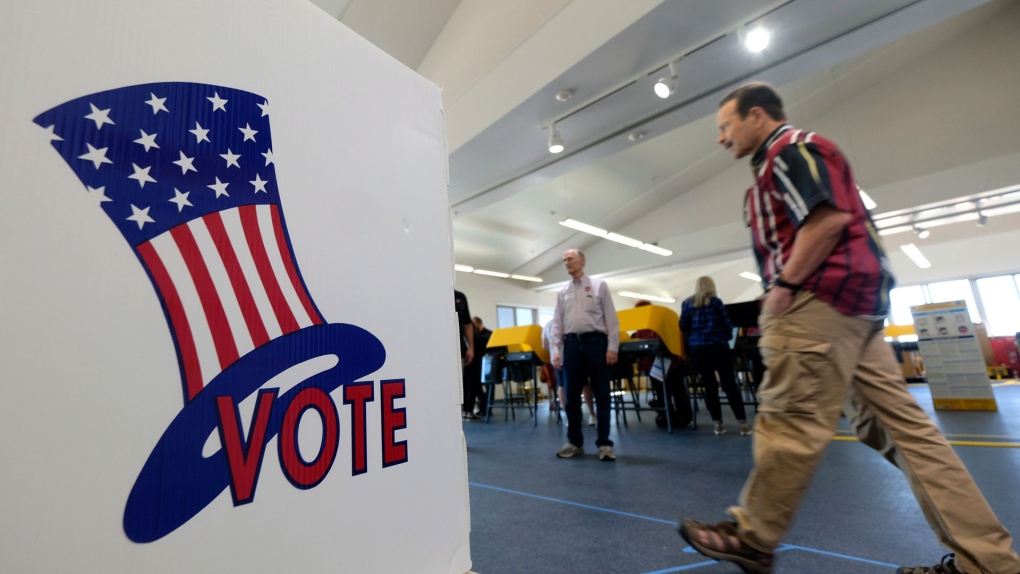 Multiple states have postponed their primaries due to the coronavirus pandemic, which has significantly altered the daily lives of Americans.

The US Centers for Disease Control and Prevention recommended in mid-March that no gatherings with 50 people or more take place for the next eight weeks to slow the spread of the novel coronavirus. The next day, the White House advised all Americans to avoid groups of more than 10 and urged older people to stay at home altogether in a set of new guidelines.

This affected some states' plans for their primaries and caucuses. Here are the states and territories changing their plans due to coronavirus:

The Alaska Democratic Party moved its party-run primary to entirely vote-by-mail, getting rid of in-person voting.

"All in-person voting across the state originally scheduled for April 4 has been canceled in favor of a more extensive vote-by-mail process approved unanimously by the Alaska Democratic Party Executive Committee," a Facebook post by Alaska Democrats read. The deadline to vote by mail was extended from March 24 to April 10.

The Alaska Republican Party said its Republican state convention, which was scheduled to take place from April 2 to April 4, would convene electronically.

"To protect the health and safety of voters, poll workers, and the most vulnerable populations, it just makes most sense to extend the date out to August," Lamont said in a statement.

This is the second time the primary has been rescheduled -- it was originally going to be held on April 28 and then was moved to June 2. Connecticut is the first state to push its presidential primary to August.

Gov. John Carney announced on May 7 that Delaware's presidential primary is being postponed to July 7, according to a press release from the governor's office.

This is the second time Delaware's presidential primary has been rescheduled -- it was originally slated for April 28 and was moved to June 2.

Carney said the Department of Elections will mail absentee ballot applications to all registered Democrats and Republicans in the state ahead of the primary. A reduced number of polling places will also be made available for in-person voting on Election Day, according to the order.

Secretary of State Brad Raffensperger announced he is postponing the primary until June 9.

"Due to the Governor's extension of the state of emergency through a time period that includes almost every day of in-person voting for an election on May 19, and after careful consideration, I am now comfortable exercising the authority vested in me by Georgia law to postpone the primary election until June 9," Secretary Raffensperger said in a news release.

Georgia had earlier moved its primary from March 24 to May 19.

The Democratic Party of Hawaii said in-person voting on April 4 has been canceled and that the primary will be conducted by mail-in ballots.

"Due to the COVID-19 pandemic, on-site same-day voting on April 4th has been cancelled. Instead the Party will send a third mailing of ballots out. ... The mail-ballot return deadline is May 22, 2020. Results will be tabulated and released on May 23, 2020," a statement from the Democratic Party of Hawaii reads.

Indiana moved its primary from May 5 to June 2.

"The right of citizens to elect their leaders in a free and open election is one of the cornerstones of America. In order to balance that right with the safety of county employees, poll workers and voters, delaying Indiana's primary election is the right move as we continue to do all we can to protect Hoosiers' health," Holcomb said in a statement.

Kentucky moved its primary from May 19 to June 23.

Secretary of State Michael Adams said the state's primary election would be postponed.

"Today, Governor (Andy) Beshear and I agreed to delay the primary election originally scheduled for May 19 to June 23," Adams said in a video posted to Twitter.

Louisiana was the first state to postpone its presidential primary. It was initially moved from April 4 to June 20, but Louisiana Gov. John Bel Edwards later signed a proclamation moving the election a second time, to July 11.

In a series of tweets explaining his decisions, the Democratic governor wrote, "Today's death count is the largest we have reported in a single day since this COVID-19 outbreak started and it brings the number of Louisianans we have lost to more than 1,000. ... Our analysis shows that most deaths come 11.2 days after the onset of symptoms, which is why we must look at long-term data and trends. ... It is also why it is incumbent upon our people to follow the Stay at Home order, because just as the positive things we do now will save lives in the future, the negative things we do could threaten lives as well."

"While there are many valid reasons for unease and uncertainty right now, ensuring that the voices of Maryland citizens are heard shouldn't be one of them," Hogan, a Republican, said at a news conference.

Hogan said the special election to the fill the congressional seat of late Rep. Elijah Cummings will be held via vote by mail only.

Later, Hogan signed a proclamation that the primary will be conducted largely by vote-by-mail and there will be one voting center open in each county for those who are unable to vote by mail.

The proclamation reads, "The State Board shall, as further specified and provided in this Order, utilize as alternate voting systems: A. voting by mail; and B. at least one voting center in each county to enable any voter who is unable to vote by mail to, in person: i. cast a ballot; or ii. return a vote-by-mail ballot."

Montana's June 2 primary will be conducted completely by mail amid the growing coronavirus outbreak.

"The Montana Secretary of State's Office received confirmation from all 56 counties that they will choose mail ballot for the upcoming primary election. April 8 is the last day for the counties to withdraw their request," Deputy Secretary of State Christi Jacobsen told CNN in an email.

Gov. Steve Bullock, a Democrat, issued a directive last month giving each county the option in lieu of in-person voting.

"Counties in Montana are permitted, but not required, to conduct the June 2 primary election under the mail ballot provisions of Title 13, Chapter 19," Bullock wrote.

New Jersey Gov. Phil Murphy, a Democrat, signed an executive order postponing the presidential primary elections from June 2 to July 7 because of the coronavirus pandemic.

"Preserving basic functions of our democracy is critical in this unprecedented time," Murphy said in a news release. "Citizens exercising their right to vote should not have to risk their safety and the safety of others in order to make their voices heard. Postponing our primary elections is a difficult, yet necessary, choice to ensure that our citizens can partake in their civic duty of voting."

The week before, Democrats on the state board of elections voted to remove all the presidential candidates who had suspended their campaigns, leaving former Vice President Joe Biden as the only name on the ballot, and canceled the presidential primary amid coronavirus fears. Democratic New York Gov. Andrew Cuomo had issued an executive order in March moving the primary from its originally scheduled date of April 28 to June 23.

The preliminary injunction, granted by US District Judge Analisa Torres, came in response to a lawsuit from former presidential candidate and current CNN contributor Andrew Yang and several New Yorkers who had hoped to serve as his delegates to the Democratic National Convention.

The Ohio state legislature passed legislation extending mail-in voting in the state's primary to April 28, and Gov. Mike DeWine signed it into law.

The legislation reads, "the Secretary of State shall send a postcard to each registered elector in this state, notifying the elector of the methods by which the elector may obtain an application for absent voter's ballots, the procedures and deadlines to apply for absent voter's ballots under this section, and the procedures and deadline to return voted ballots to the office of the board of elections under this section."

Ohio Secretary of State Frank LaRose issued a statement saying he advocated for a different plan, and that it was "disappointing" that the state legislature has "chosen to significantly reduce the time provided for Ohio to bring this primary to a close."

"The proposal that Governor DeWine, Lt. Governor Husted and I laid out was preferable, and unlike the plan enacted today, our proposal would have concluded the election by putting a ballot request directly in the hands of every voter along with a postage-paid return envelope," LaRose said.

Uncertainty has surrounded the status of Ohio's primary election. The day before the primary, which was initially scheduled for March 17, DeWine requested that a court move the election to June because of the pandemic. A judge denied DeWine's request. Then, the governor said Ohio Health Director Amy Acton would order the polls closed because of a health emergency. The following morning, Ohio's Supreme Court rejected a challenge to the poll closure by a candidate for a county judgeship.

Pennsylvania Gov. Tom Wolf, a Democrat, signed a bill to move the presidential primary election from April 28 to June 2.

"Notwithstanding Section 603 or any law of this commonwealth, the General Primary Election shall occur throughout this Commonwealth on June 2, 2020," the bill reads.

Puerto Rico announced the new date for the Democratic primary will be July 12.

A press release from the Puerto Rico Democratic Party announcing the date change criticized both the DNC and Sen. Bernie Sanders of Vermont for forcing them to hold the contest amid the coronavirus outbreak. It said Chairman Charles Rodriguez "preferred to avoid the primary and save much needed public funds to deal with the COVID-19 emergency and budgetary constraints, and instead adopt an alternate method for selecting delegates."

"The Democratic primary, however, is mandated by law and Senator Sanders insist on participating in the primaries in Puerto Rico and other states in order to accumulate delegates that he believes will enable him to advance his platform proposals at the Democratic National Convention," the release said.

The party had postponed the primary a second time. Puerto Rico Gov. Wanda Vázquez, of the New Progressive Party, initially signed legislation to move the primary, which had been scheduled for March 29, to the end of April. The measure included language to move the date again if the state of emergency continued.

Rhode Island Gov. Gina Raimondo, a Democrat, signed an executive order moving the Democratic and Republican presidential primary elections from April 28 to June 2. The order said the state board of elections would determine a "predominantly mail ballot" primary.

"The Rhode Island Department of Health shall advise the Board on any public health concerns that may arise with respect to voting practices involving person-to-person contact," the order read.

West Virginia Gov. Jim Justice, a Republican, said he is moving the state's primary election from May 12 to June 9.

"I truly support...the ability for all of our citizens to be able to vote and to be able to vote in a way that they've always voted. You know, we've voted in wartime and in peace and in absolute, you know, tough situations and everything. We've got, especially our seniors, that value, the treasure of being able to vote," Justice said.

The Wyoming Democratic Party said it would conduct its presidential preference caucus entirely by mail.

"All WyoDems who were registered by March 20 were automatically sent a ballot in the mail, to the address on their voter registration. The deadline to request a replacement ballot was March 31, 2020," a statement from the party reads. "Ballots must be mailed back to WDP (postage paid envelope is included) and received by April 17, 2020. Ballots received after April 17 will not be tabulated."

The Wyoming Democratic Party said counties would hold delegate elections and conventions electronically no later than May 24.

This story will be updated as additional postponements are announced.