Chaos and COVID-19: Why militarized inauguration day security is 'unsettling' but necessary 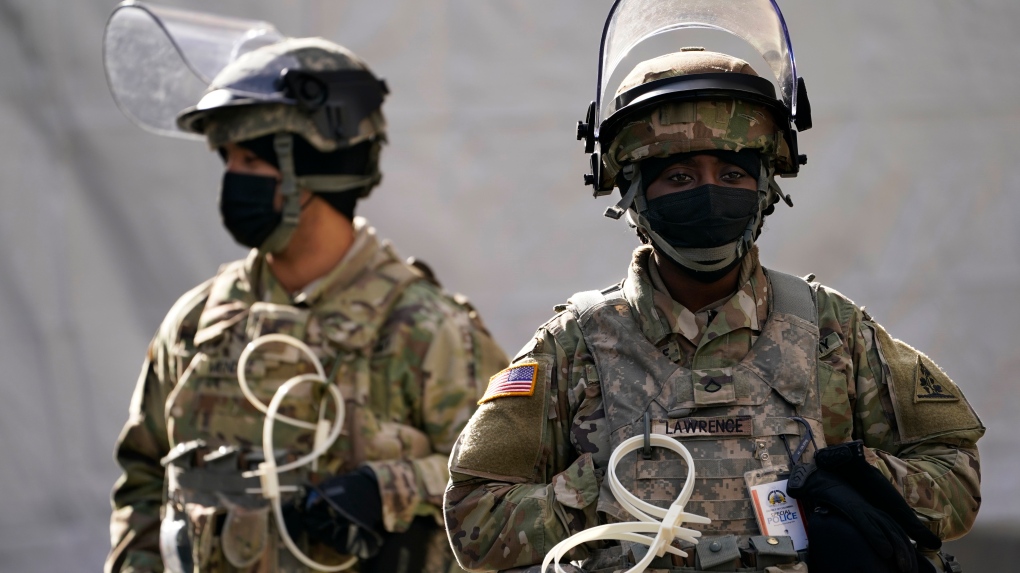 National Guard stand outside a checkpoint on as security is heightened ahead of President-elect Joe Biden's inauguration ceremony, Tuesday, Jan. 19, 2021, in Washington. (AP Photo/John Minchillo)

TORONTO -- Just two weeks after a mob of U.S. President Donald Trump’s supporters stormed the Capitol, Washington is gearing up for the inauguration of president-elect Joe Biden.

In theory, the ceremony will be the same as the many before it – Biden will take his oath of office on the steps of the Capitol, and then make his way to the White House.

But with unprecedented security concerns and the need for COVID-19 safety protocols, this year’s inauguration will be unlike any other.

National Guardsmen began arriving after the events unfolded on Jan. 6, and while the U.S. Secret Service has overall command of the security for the ceremony, some 25,000 National Guards are expected to be involved. D.C. Metro Police will also be included in the mix of forces on alert.

The Pentagon has issued approval for some of the troops to be armed – and National Guards have been photographed doing patrols while carrying automatic rifles.

For those who live and work in Washington, the effect has been dramatic.

“There are National Guard troops throughout the downtown area, these massive military vehicles, checkpoints, it really looks like a war zone,” he said, calling the situation “unsettling.”

“We’ve never had a call for this level of militarization of security in our city before, and yet that is what it has come to,” he said.

The FBI has been vetting members of the National Guard who are involved in tomorrow’s ceremonies.

Despite Acting Secretary of Defense Christopher Miller saying Monday that “there is no intelligence indicating an insider threat” to Biden, it was announced Tuesday that 12 National Guard members have been removed from inauguration duty after discovering their links to fringe right-wing militias.

No plot against Biden was found, according to the Associated Press.

The enhanced screening comes as details have emerged linking those who took part in the Capitol riot with the U.S. military. Amongst those arrest and charged in connection with the violence is a U.S. army reservist who has security-level clearance and a history of posting extremist views online.

Timothy Hale-Cusanelli of New Jersey was described as “an avowed white supremacist and Nazi sympathizer” in court documents related to his arrest.

On Monday, the FBI alerted other law enforcement agencies that QAnon conspiracy theorists – those who believe in a “deep state” plot against Trump – were discussing acting as National Guards to infiltrate the inauguration, according to an intelligence report obtained by The Washington Post.

Social media platforms popular with the QAnon base like Parler, which is partially back online after being pulled from Apple, Amazon and Google last week, forum site 8kun and the right-wing chat app Gab have been abuzz with theories about what could happen at the inauguration ceremony.

The “Parler Takes” account on Twitter – which screenshots content on Parler, Gab and forum sites notorious for extremist views, and is an active player in online movements identifying extremists who took part in the Capitol riots - has captured some of the sentiment and conspiracy theories leading up to Jan. 20.

In one example, a post dated Jan. 18, 2021 on Gab has a detailed conspiracy theory on a major operation involving a rolling blackout of D.C. for days, Trump remaining president and mass arrests.

However, it is hard to determine what is fantasy and what is actionable intel in the online chatter, said FBI Director Christopher Wray in a briefing last week.

“I think with all the extra security that is there, he [Biden] is very safe,” said Kenneth Gray, former FBI special agent and lecturer at Newhaven University in Conn., on CTV’s News Channel Tuesday.

Gray said any armed protesters who show up in D.C. will be faced with major challenges.

“Any protesters who show up will have to get through security… they won’t make it in,” Gray said. “There may be protests that happen elsewhere in the country or outside the green zone but they will not be present at the inauguration.”

Law enforcement across the country are also on high alert, after several state capitols saw incidents of violence and protests on the same day as the U.S. Capitol riot.

An FBI bulletin warned of “armed protests” being planned across all 50 states leading up to – and potentially on – inauguration day.

Non-scalable fencing topped with barbed wire has been installed around the U.S. Capitol and parts of the National Mall to prevent anyone from disrupting proceedings.

A large swath of territory surrounding the White House and U.S. Capitol has been designated a “Green Zone” where residents who live and work may enter, and a “Red Zone” where only those with security clearance may be present.

Vehicle checkpoints and subway station closures are also in effect.

“I had to take a cab to the outside of the perimeter [Green Zone] and then vehicles could not go further than that, so I had to get out and walk a fair bit,” he said.

“I passed by big military camouflaged vehicles on street corners to block entry, and soldiers talking to people in their cars, asking for ID… miles of the streets themselves were really abandoned and empty for the most part,” he said.

Security concerns around the inauguration has also prompted heightened security at airlines and airports, with bans on travelling with firearms – and some of those who took part in the violence on Jan. 6 have been added to a no-fly list.

Airbnb announced last week that it was cancelling bookings in D.C. for dates surrounding the inauguration, as have several local hotels.

Additionally, to avoid the inauguration becoming a COVID-19 super-spreader event, the public is not being invited en masse to to watch the proceedings at the National Mall.

Instead, the National Park Service announced last week that some 200,000 flags will fill some of the space to represent the public.

Images of the setup for Jan. 20 show about 100 chairs distanced around the Capitol balcony that normally serves as the dais for the president-elect to be sworn in.

Guests will be wearing facemasks and will be required to have a negative COVID-19 test before attending the event.

After Biden and Kamala Harris are sworn in, they will take part in the “pass in review” ceremony to review the troops.

However, Instead of the normal presidential parade – which has too many security risks - Biden will travel to Arlington Cemetery.

The normal pomp and circumstance surrounding an inauguration, including a ball at the White House, has been scrapped in favour of an online concert hosted by Tom Hanks and headlined by Lady Gaga and Jennifer Lopez.

But, even amongst all the fear and tension surround the inauguration and transfer of power, Oba still has hope for the United States.

“You know, Washington D.C., is a city about government, and a city where people who believe in progress can make a difference,” he said.

Oba said he believe the “majority” of the city is “very excited” about the transition to the new administration.

“Amid all the fear, there is hope that the country can get better, and that real change is possible.”