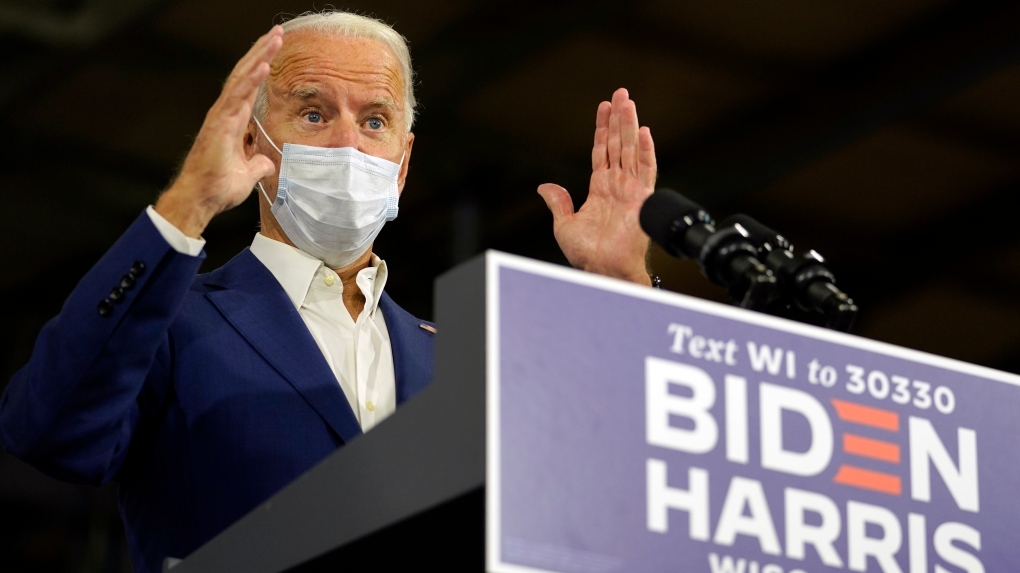 On a recent Friday, he'd already apologized for the delayed start to a speech, then taken more questions than expected at a subsequent press conference. When it was finally over, Biden's motorcade sped away quickly enough to leave behind one of the journalists travelling with it.

But as the line of armoured, black SUVs reached Biden's home in suburban Wilmington, it suddenly reversed course and headed back out -- this time to a nearby M&T bank branch. Biden's next event was already supposed to be underway, a virtual fundraiser with National Democratic Finance Chair Chris Korge. Instead, he lingered at an ATM.

The former vice-president later told the donors gathered online that he was sorry to have been waylaid by a "significant press conference." He omitted the stop to withdraw pocket money.

With their packed schedules, relish for meeting as many people as possible and natural tendency toward verbosity, most presidential candidates -- and the commanders in chief they sometimes become -- rarely get anywhere, or do anything, on time. Even controlling for typical on-the-trail tardiness, however, Biden has been pushing it lately.

He was more than 90 minutes late to a speech and another press conference in Wilmington last week, and arrived at a CNN town hall in Pennsylvania the following day with barely 20 minutes to clip on a microphone and prepare to go on air. Afterward, his motorcade was already in motion but had to stop as Biden hopped out to chat up a group of firefighters.

"When you get into the fall, every week feels like a month, every day feels like a week, every hour feels like a day, every minute feels like an hour," said Chris Lehane, a former top political adviser to President Bill Clinton. "Time becomes very elastic."

The pandemic has made planning and attending events more logistically challenging, especially since Biden's campaign is adhering to rules requiring social distancing and preventing large crowds in a way his opponent, U.S. President Donald Trump, has not. But it also means that Biden doesn't keep big audiences waiting for extended stretches if he falls behind schedule -- reducing the consequences for doing so. He was routinely late before the coronavirus outbreak, often making those in the crowd -- and even some of his own staffers -- roll their eyes and mutter about Biden "bidin' his time."

Not all presidents, or candidates hoping to occupy the White House, are chronically late. George W. Bush had a rule about always starting on time.

"He was always on time, early. And made fun of people who weren't," said Doug Wead, an adviser to both Presidents Bush who is now an author and commentator. "But I don't know that it made him any better president."

Wead remembers George H.W. Bush being inconsistent -- sometimes arriving early, sometimes late. Barack Obama was often late. Trump, too, and, in the coronavirus era, he's become fond of tweeting that he's going to hold White House news conferences with only a few minutes' notice -- then deleting those and sending updates with later times without explanation.

No commander in chief in recent memory, however, was so often tardy as Clinton. His ignoring of the clock was so common that those who knew him in Arkansas referred to "Clinton Standard Time," which ran at least 15 minutes behind the rest of the world. By the time Clinton was running for president in 1992, it had become "Elvis Time," which meant adding up to an extra hour or two to any scheduled start time.

Clinton also sometimes changed plans entirely on the fly -- which isn't easy when Secret Service, a sizable staff and the presidential press pool went everywhere he did.

In one notorious incident, Clinton's travelling party flew by helicopter to a Virginia golf resort as part of a daytrip to a Senate retreat. The president liked the place so much that he decided to stay overnight and golf the next day -- forcing a van carrying travelling press to make a detour to Kmart so those aboard could buy toothbrushes and a change of clothes.

While campaigning, meanwhile, nearly all politicians run late because, when they have a chance to get in front of voters, they can't stand to tear themselves away -- knowing each personal interaction all but guarantees a vote.

"I have yet to be in a campaign where you can effectively build in those transitions between events," Lehane said. "Because the candidate knows every second is important and wants to use all of them trying to connect with voters."

That was particularly true with Clinton. But it is with Biden, too.

"You get used to thinking it'd be a handshake and a quick photo, and that's not what it is with the vice-president," said John Flynn, who was Biden's travelling chief of staff during the final years of the Obama administration. "He's got this sixth sense about him where he would just sense another unique thing about the person -- or going on in the person's life -- and really drill down to make a personal connection."

Obama, in a recent virtual discussion with Biden's running mate, California Sen. Kamala Harris, told her to be ready to often run late.

"If you have a joint event," Obama said, "he may take a little longer than what appears on the schedule cause he will be talking to every single person."

As an exception, Biden usually stays more or less on time when his wife, Jill, travels with him. Now that presidential voting is underway, however, she is often off campaigning on her own. That leaves her husband to go through his day solo, and his campaign to advise that his scheduled start times are "notional" at best.

It's not a new phenomenon.

Lehane recalled being the head of the College Democrats at Amherst College in 1989, when then-Sen. Biden visited for what was supposed to be a 45-minute speech. Instead, he spoke for hours, holding personal chats with nearly everyone in the room -- and staying so long that a storm blew in and his flight was cancelled. Biden headed back to the dorms with everyone else, ordered beer and pizza and slept in a common area that night, under a poster of Bob Marley.

"That was more than 30 years ago," Lehane said. "He's the exact same guy today."

'So much work to do': How Joe Biden is already planning for transition

How Trump plowed through US$1 billion, losing cash advantage