TORONTO -- Four battleground states continue to diligently count ballots as the world watches to see who will become the next U.S. president.

Joe Biden is six electoral votes short of the presidency, according to tracking from The Associated Press. A win in Georgia, North Carolina, Nevada or Pennsylvania would land him the presidency.

Here’s a look at which states are still in play and when you can expect results. Click here for our live map with up-to-date results.

WHEN THEY COUNT MAIL-IN BALLOTS: Officials have said it could take days for full results, including counting mail-in ballots

FINAL POLLING AVERAGE: Joe Biden ahead by 1.2 points (according to tracking from FiveThirtyEight as of Nov. 3)

Biden has taken the lead in Georgia thanks to a boost in support from mail-in votes from Democratic-leaning counties in Atlanta and Savannah. However, those results aren’t final, and election officials are expected to continue counting votes into Friday.

Biden steadily chipped away at Trump’s lead throughout Thursday, ultimately wiping away the president's early advantage from in-person votes on election day.

Mathematically speaking, Trump can't afford to lose the state if he hopes to hold on to the presidency.

Georgia has voted Republican in every election dating back to 1992, when the state supported Bill Clinton. The state also represented one of Trump’s more comfortable leads in the South in 2016.

WHEN THEY COUNT MAIL-IN BALLOTS: Officials weren’t allowed to begin counting mail-in votes until election day, and officials expect most votes will be reported by Friday, Nov. 6.

Trump leads by less than 0.4 points in Pennsylvania, with 90 per cent of the expected votes counted.

Much of the remaining vote is coming from mail-in ballots in Philadelphia that have helped Biden chip away at Trump’s lead.

Officials warned for weeks of a “red mirage” in Pennsylvania — an early but potentially unsustainable lead for Trump — because the state counts mail-in ballots last. The Biden campaign has said they are optimistic that they will flip the state and deliver a fatal blow to Trump’s campaign.

Trump won Pennsylvania by a margin of 44,292 votes in 2016, the closest results of a presidential election in the state in 176 years.

Biden consistently led in polls of Pennsylvania for months, and the Democratic Party has dumped a huge amount of money into state advertising. Before 2016, Pennsylvania was considered a reliably blue state, having voted for the Democratic candidate in the previous six elections.

Pennsylvania’s critical role in the election explains the focus on fracking — a major industry in the state linked to up to 50,000 jobs. Biden has said that, despite his progressive environmental agenda, he would only ban the small fraction of fracking that occurs on federal land. Trump has used Biden’s past comments against him and tried to paint the Democrat as determined to destroy the fossil fuel industry.

WHEN THEY COUNT MAIL-IN BALLOTS: Officials have not provided details.

With 84 per cent of the vote in, Biden was leading in Nevada by one point. Election officials released a new batch of votes Thursday and expect more on Friday from Clark County, which includes Las Vegas.

Nevada supported Clinton in 2016, and Democrats typically boast a strong ground game in the state thanks to the influential Culinary Union, which helps door-knock across the state to consolidate left-leaning, working-class voters.

However, the pandemic sidelined those door-knocking efforts for months this year, potentially disrupting a reliable source of Democratic support.

WHEN THEY COUNT MAIL-IN BALLOTS: Early votes and mail-in ballots are counted first and expected to be reported by 7:30 p.m.

Trump leads by one percentage point in North Carolina, with 94 per cent of the expected vote counted. Election officials say they have more than 117,000 outstanding mail-in ballots, and it could take until Nov. 12 or 13 for the state to confirm its final count.

Trump won this medium-sized battleground state by a comfortable margin in 2016. 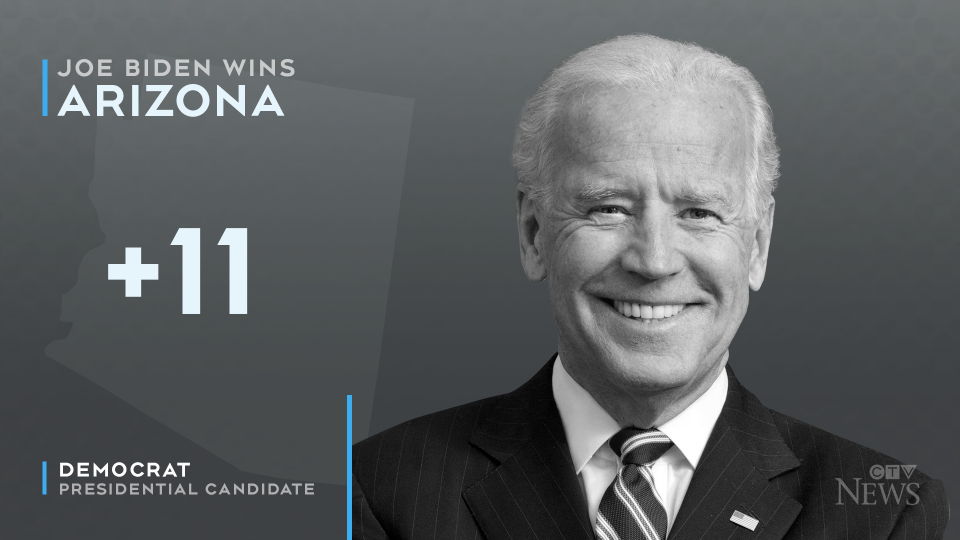 WHEN THEY COUNT MAIL-IN BALLOTS: Mail-in ballots can be counted up to two weeks before election day

Biden has won Arizona, the Associated Press declared at 2:50 a.m. Wednesday. Most other major news networks have not followed suit as they await more results.

The AP said Thursday it is still monitoring the vote count in the state.

“The Associated Press continues to watch and analyze vote count results from Arizona as they come in,” said Sally Buzbee, AP’s executive editor. “We will follow the facts in all cases.”

Trump’s campaign has said it’s confident the president will overtake Biden once all votes are counted.

Arizona hasn’t voted for a Democrat since Bill Clinton’s victory in 1996. But the state has continued to shift more to the left in recent years.

Some pundits viewed Arizona as part of Biden’s “plan B” approach to win the White House if he failed to clinch Pennsylvania. 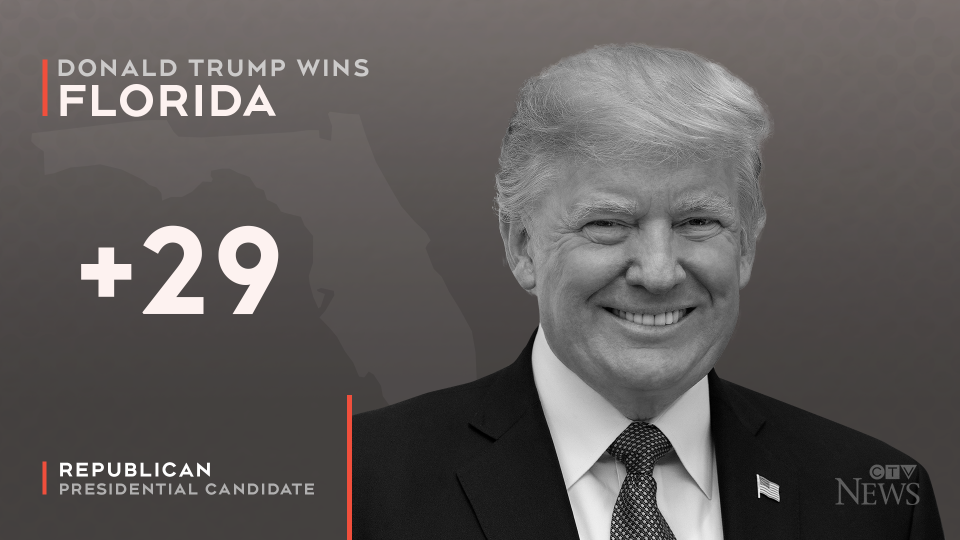 WHEN THEY COUNT MAIL-IN BALLOTS: All advance ballots should be reported by 8:30 p.m.

U.S President Donald Trump has won Florida, holding onto his adoptive home state and opening a wider path for his re-election.

Trump won the state by turning out a higher number of voters in the Miami area and keeping voters in his column who supported him in 2016. 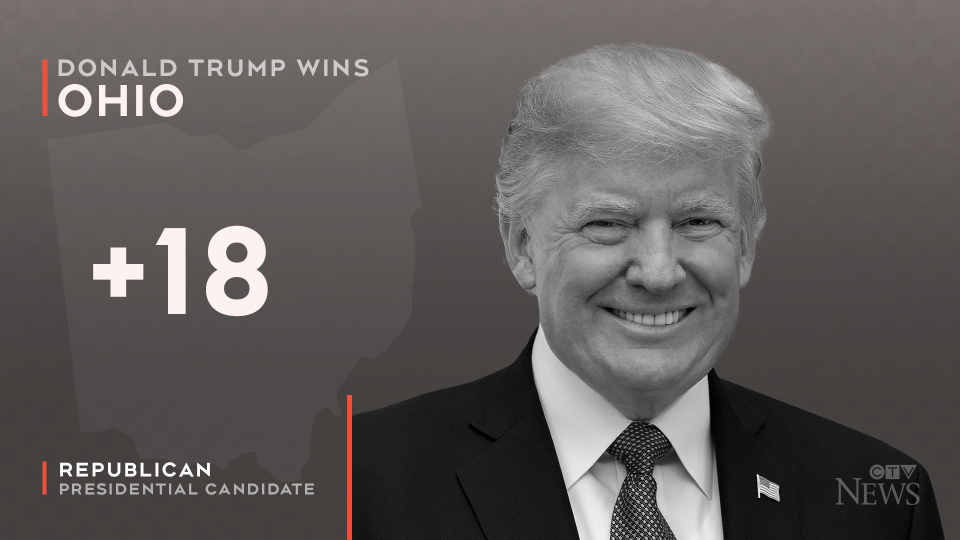 WHEN THEY COUNT MAIL-IN BALLOTS: Advance ballots are counted first and are expected to be reported by 8 p.m., officials say

Trump has won Ohio, a state he carried handily in 2016. It’s difficult to understate the importance of the victory: no Republican has ever won the White House without carrying the state.

Long considered a perennial swing state, Ohio has shifted toward Republicans in recent years. In 2016, Ohio voters supported Trump in greater levels than voters in traditionally Republican states such as Arizona and Georgia. 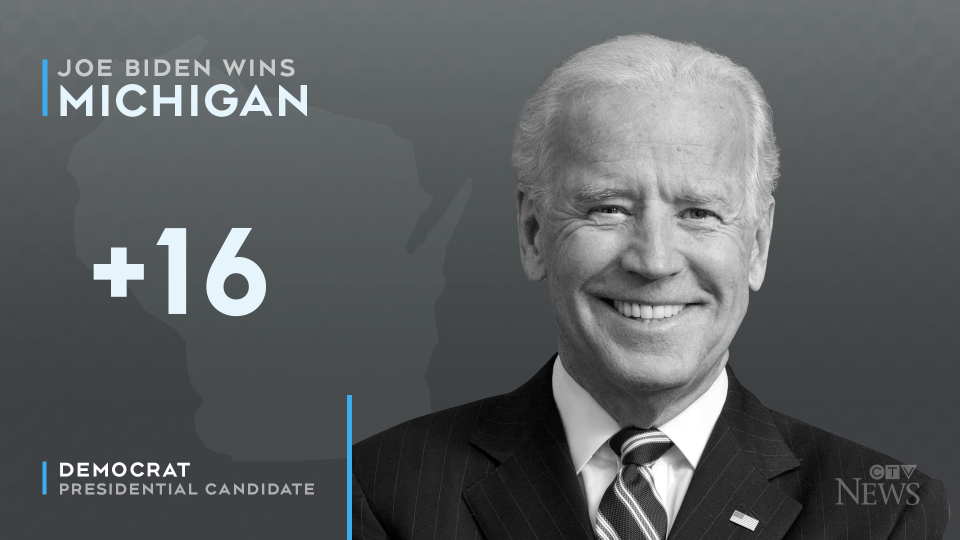 WHEN THEY COUNT MAIL-IN BALLOTS: Ballots can’t be tabulated until election day, and officials say it could take until Friday, Nov. 6 for results

Biden has flipped Michigan, winning a crucial state that helped buoy Trump to victory in 2016. Taking back the state was key to Biden’s plan to rebuild the Democrats’ “blue wall” in the Midwest.

Michigan was declared for Biden on Wednesday with 99 per cent of the vote counted. A significant number of votes came from Detroit, where Democratic vice-presidential candidate Kamala Harris spent election day campaigning.

Trump narrowly won Michigan in 2016 by just 10,704 votes. The result stunned pollsters and the Clinton campaign, both of whom assumed the state, which had reliably voted for Democrats in the six previous presidential elections, would go to Clinton.​ 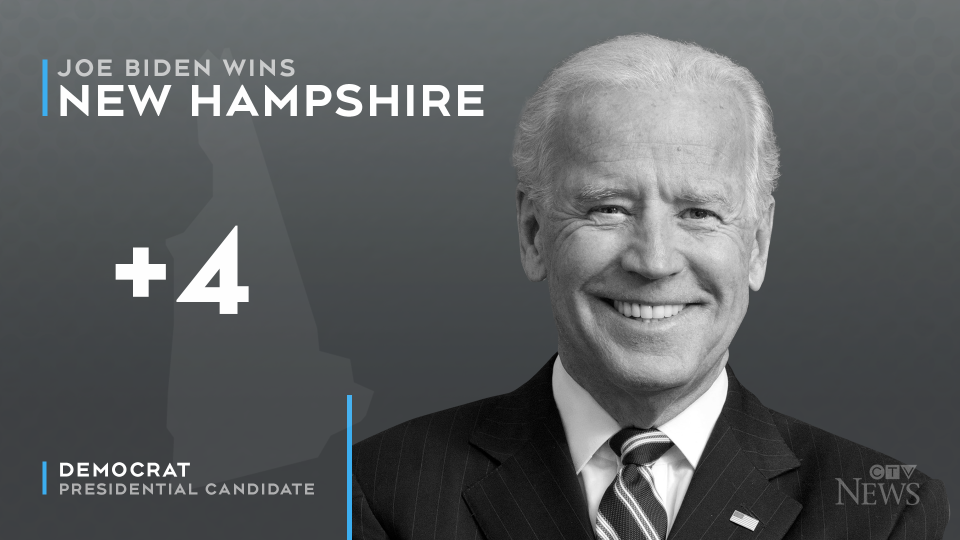 WHEN THEY COUNT MAIL-IN BALLOTS: Officials have not provided details.

Biden has won New Hampshire, carrying the tiny battleground state the Hillary Clinton won by a slim margin in 2016.

New Hampshire doesn’t make a huge difference on the electoral map, but it helps bolster Biden’s hopes of winning the White House. 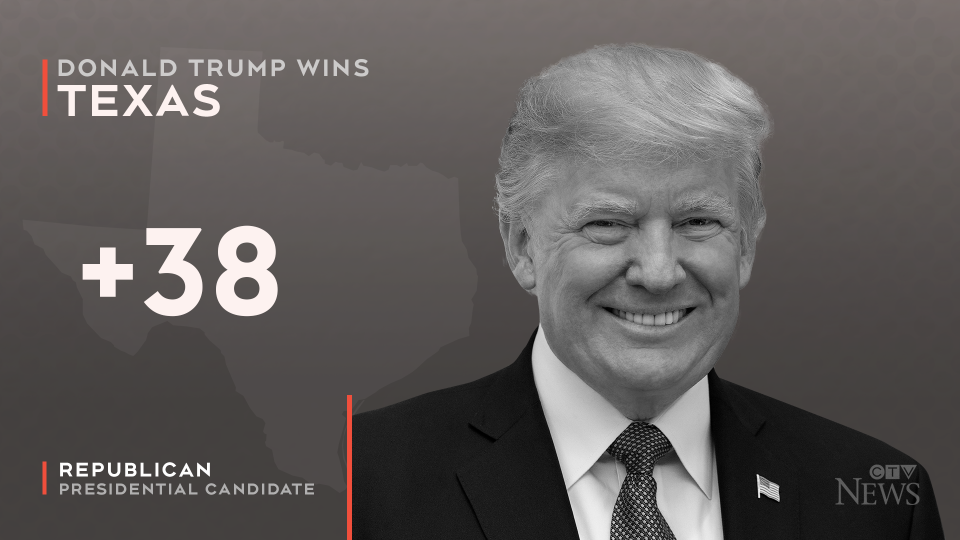 WHEN THEY COUNT MAIL-IN BALLOTS: Officials in Texas have not provided an estimate

Biden’s campaign has been criticized by Democrats in Texas, including former Democratic candidate Beto O’Rourke, for not spending more time and money in the state. 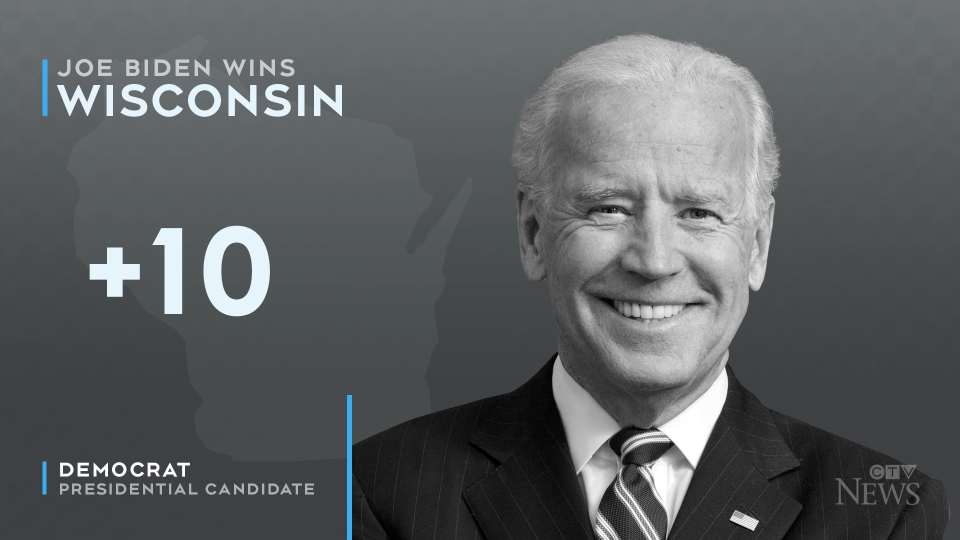 WHEN THEY COUNT MAIL-IN BALLOTS: In-person votes are counted first in some but not all districts, and officials expect results on election night or the next day.

Biden has won Wisconsin, securing the state's 10 electoral votes and reclaiming a key part of the blue wall that slipped away from Democrats four years ago.

The Trump campaign has vowed to push for a recount. When Wisconsin’s vote was recounted in 2016, Trump increased his margin over Hillary Clinton by 131. Currently, Biden leads by more than 20,000 votes.

Hillary Clinton notoriously did not visit Wisconsin once in 2016 — a mistake that the Biden campaign has been keen not to make. Both Biden and Harris have toured the state early on in the election and focused plenty of resources on winning over voters.

The state is also in the midst of a spike in COVID-19 cases, and it’s yet to be seen how the ongoing outbreaks could impact in-person voting numbers. 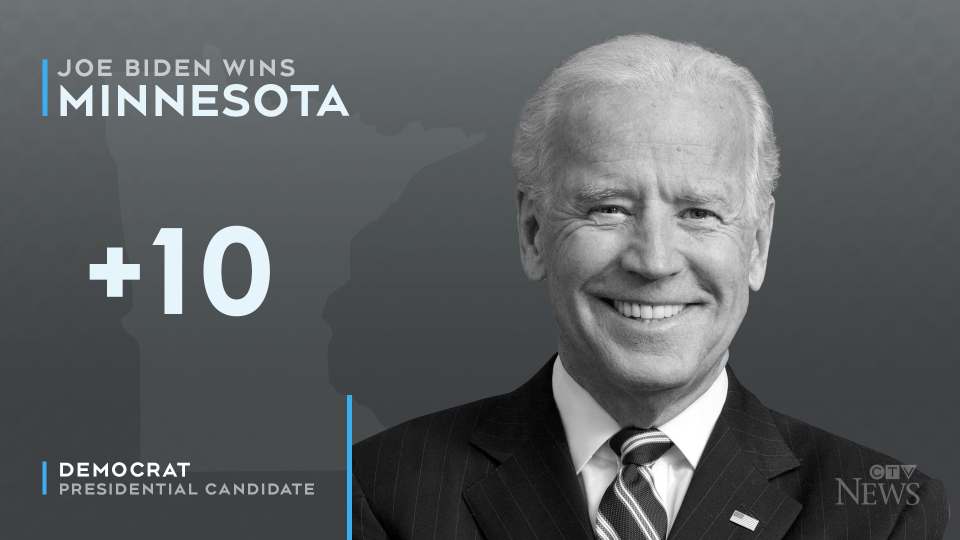 WHEN THEY COUNT MAIL-IN BALLOTS: Officials expect final results on election night or by noon on Wednesday, Nov. 4.

Biden has captured Minnesota, winning the Midwestern state that Hillary Clinton carried in 2016. Minnesota was not considered as competitive as its neighbours, Michigan and Wisconsin, but regardless it represents an important victory for the Biden campaign.

Biden’s win doesn’t come as much of a surprise. Minnesota hasn’t voted for a Republican since Richard Nixon won re-election in 1972.​ 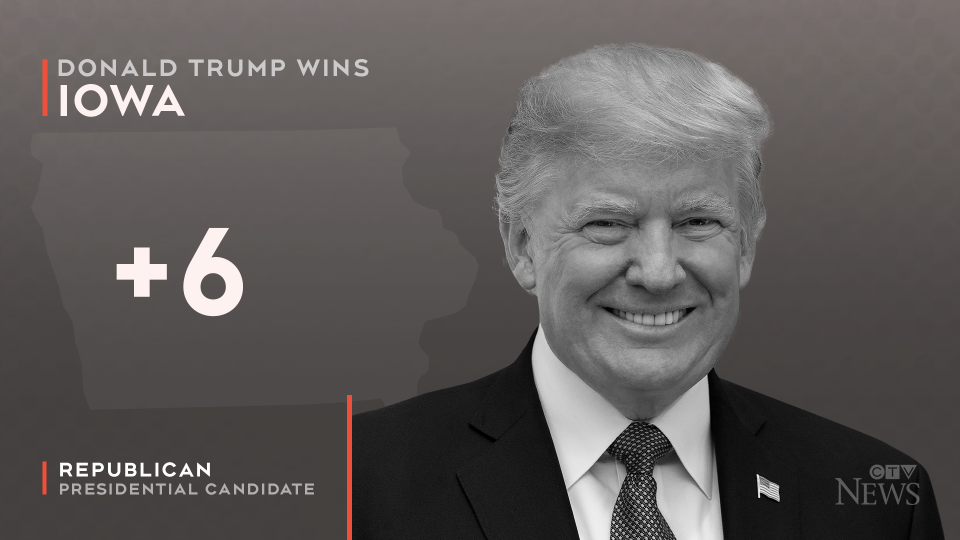 WHEN THEY COUNT MAIL-IN BALLOTS: Absentee ballots will likely be counted first, and officials expect results in a timely fashion

Trump has won in Iowa. The state voted for him in 2016, and polling suggested the Republican had an advantage heading into election day.

Paths to victory: These are the four states where the U.S. election is being decided

The count goes on -- with Biden on the cusp of presidency

Trudeau says he has faith in U.S. vote process, as Trump makes unsubstantiated claims of fraud

Trump faces tough road in getting Supreme Court to intervene