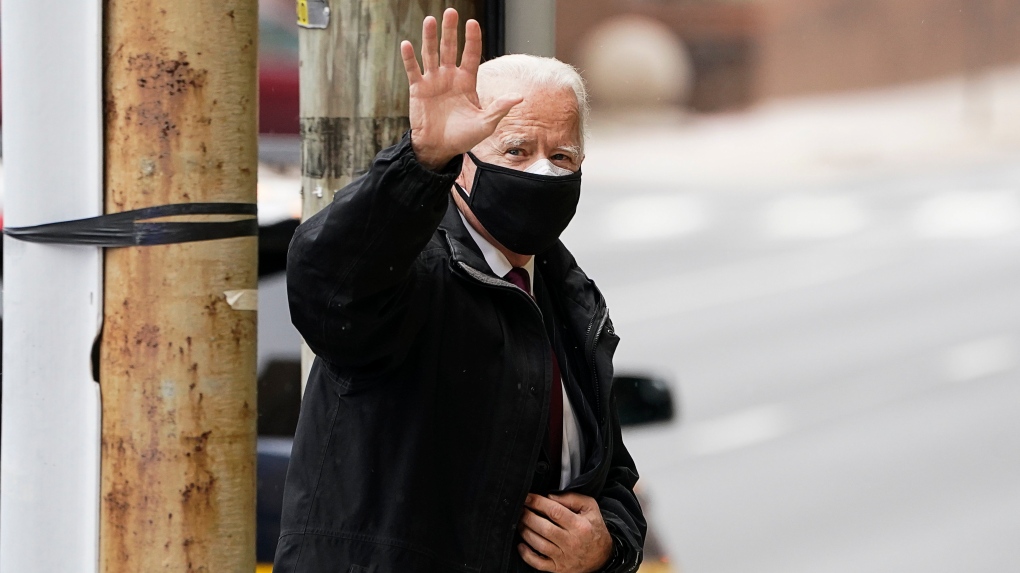 PHILADELPHIA -- U.S. president-elect Joe Biden and Vice-President-elect Kamala Harris pitched in on Martin Luther King Jr. Day service projects as a militarized and jittery Washington prepared for a swearing-in that will play out under extraordinary security.

Biden and his wife, Jill, joined an assembly line in the parking lot of Philabundance, an organization that distributes food to people in need, and helped fill about 150 boxes with fresh fruit and nonperishables.

As Biden and Harris took breaks from their inaugural preparations to honour the civil rights hero Monday, outgoing U.S. President Donald Trump remained out of public view at the White House for the sixth straight day. In past years, Trump has marked the holiday with unannounced visits to the King memorial in Washington.

Such a visit would have been complicated because Washington has become a fortress city of roadblocks and barricades before Wednesday's inauguration, as security officials work to avoid more violence following the Jan. 6 riot by a pro-Trump mob at the U.S. Capitol.

In a measure of how nervous the capital city has become, U.S. Capitol Police on Monday briefly locked down the Capitol complex and paused inaugural rehearsals after fire broke out at a nearby homeless encampment.

Harris played down any personal security concerns, saying she's "very much looking forward to being sworn in."

"I will walk there, to that moment, proudly with my head up and my shoulders back," Harris told reporters after volunteering at a food bank.

Still, Washington residents were on high alert and much of the city felt desolate, with large swaths of the area around the Capitol, White House and National Mall sealed off from all but authorized personnel.

Katie Henke, 40, a southwest D.C. resident, said the city felt on edge. She's concerned enough that she packed a "go-bag" with clothes and other personal items in case she feels she must flee her neighbourhood.

"This is legitimately scary," she said. "Between the pandemic and Trump, I feel like our country is at a weak and vulnerable point. And we know there are forces inside and outside the country that see that vulnerability as an opportunity to do something."

Some 25,000 National Guard troops were being dispatched across the city to bolster security. Monuments were closed to the public until after Wednesday's inaugural events.

Harris resigned from her Senate seat Monday. She offered thanks to her California constituents in a farewell video posted on social media "for the honour of representing the place of my birth, as a proud daughter of California."

First lady Melania Trump posted a farewell video in which she thanked Americans for the "greatest honour of my life," but she made no mention of the incoming Biden administration. Her husband has already announced he will not attend the inauguration -- he's the first outgoing president to skip the ceremony in 152 years -- and will depart for Florida hours before Biden's swearing-in.

And while Trump stayed out of view, the White House announced he had signed several executive orders, including an amended version of a previous order calling for the creation of "National Garden of American Heroes."

Biden continued to build his administration. His transition team announced Monday he will nominate Rohit Chopra to direct the Consumer Financial Protection Bureau, tapping a liberal ally of Sen. Elizabeth Warren to lead the agency whose creation she championed.

Chopra, a commissioner at the Federal Trade Commission, helped launch the agency after the 2008 financial crisis and served as deputy director, where he sounded the alarm about skyrocketing student loan debt. The pick comes as Democrats are eyeing ways to provide student loan relief to millions of Americans as part of a COVID-19 aid package.

Biden also announced his intent to nominate Gary Gensler, former chairman of the Commodity Futures Trading Commission, as the next chair of the Securities and Exchange Commission.

Inaugural organizers on Monday finished installing some 200,000 small U.S., state and territorial flags on the National Mall, representing Americans who couldn't come to the inauguration, which is restricted under tight security.

Biden and Harris plan to take part in an event Tuesday, soon after the president-elect arrives in Washington, at the reflecting pool near the Lincoln Memorial to honour American lives lost to COVID-19.

Even before the Jan. 6 insurrection at the Capitol, inauguration festivities were expected to be muted due to the virus. Mayor Muriel Bowser urged residents to stay away from the city on Inauguration Day.

David Hill, general manager of the Phoenix Park Hotel near the Capitol working his seventh inauguration, said in a typical inauguration week the hotel would be booked solid months ahead, with guests looking to witness history willing to pay higher rates and stay a four-night minimum.

Bookings only started to pick up in the last week or so -- mostly journalists, National Guard troops and other security officials dispatched to D.C. amid the growing concerns about violence. Hill said he's now "close to full" but guests aren't paying the typical inauguration premium.

The German Federation of Journalists warned foreign correspondents covering the event to take precautions and be "particularly careful and alert on Wednesday" after journalists were attacked during the riot at the Capitol.

"It is appalling that such an appeal is even necessary in the USA, once the model democracy," said Frank Ueberall, the association's head.

This story has been corrected to show that the flag are to represent those who couldn't come to the inauguration, not COVID-19 victims.