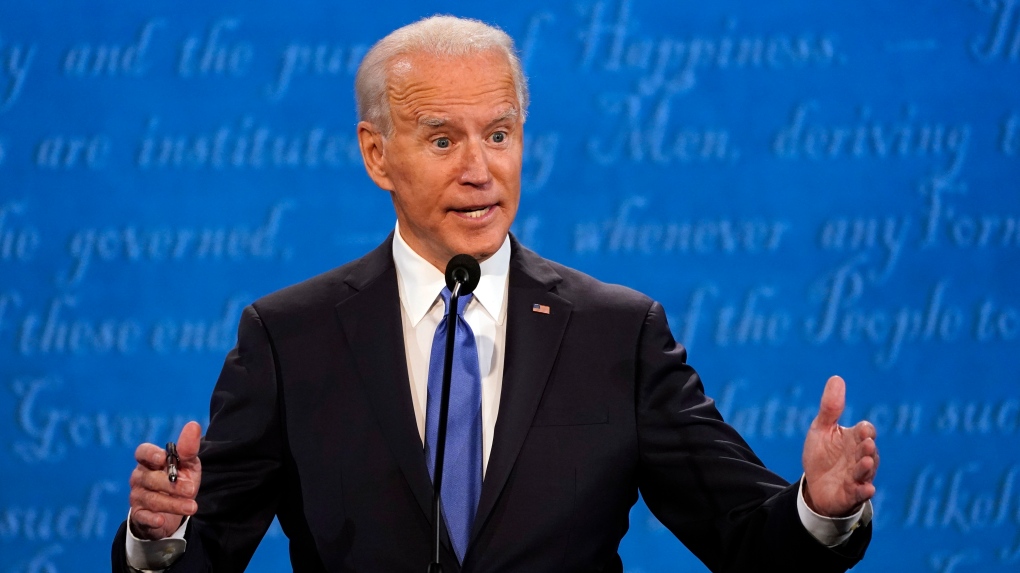 Democrat Joe Biden's remark that he would "transition" away from oil in the U.S. in favour of renewable energy drew quick attention Thursday night from U.S. President Donald Trump, who saw it as a boon to his election chances in key states.

"I would transition away from the oil industry, yes," Biden said in the presidential debate's closing minutes under peppering from Trump. "The oil industry pollutes, significantly. It has to be replaced by renewable energy over time."

The Biden campaign's climate plan calls for the U.S. to have net-zero greenhouse gas emissions by 2050. And he repeated his pledge to end federal subsidies for the oil and gas industry. However, Biden's plan does not call for a ban on climate-damaging fossil fuels, focusing instead on technologies that can capture pollution from oil and other sources.

Still, Trump seemed surprised and pleased by Biden's comment, declaring it a "big statement," and suggesting it would come with political blowback in oil-producing states that stand to lose jobs.

"Basically what he is saying is he is going to destroy the oil industry," Trump said. "Will you remember that Texas? Pennsylvania? Oklahoma? Ohio?"

Trump won all four states in 2016, but Pennsylvania in particular is a pivotal swing state this cycle, with both candidates investing heavily. Ohio is also in play, and Democrats even see Texas as a longshot pickup on an expanded electoral map.

After the debate, Biden told reporters he would not "ban" fossil fuels or move away from them for "a long time."

The back-and-forth came as the debate was coming to a close, during a segment on how the candidates would respond to climate change. Biden says the country has a moral obligation to tackle climate change, while Trump has questioned the well-established science behind it. Polls show about three in four Americans are concerned about dangerous warming of the nation and planet.

But politically, Republicans see Biden's comments as potentially damaging to Democrats in states that rely on the oil and gas industry. Trump has sought to make hydraulic fracturing, a process of oil and natural gas extraction, a key issue in Pennsylvania, wrongly charging Biden would ban the practice.

Biden says he would ban new oil and gas permits on federal land, but most of the United States' fracking happens on private land.

Pennsylvania is both a leading battleground state in the presidential election and a leader in the nation's fracking boom. Trump has been eager on frequent campaign trips there to cut a contrast between himself and Biden on the issue. Trump touts his support for a sector he says brings economic benefits to rural areas and jobs to construction workers. The state says the oil and gas sector employs about 26,000 workers there.

But it's not clear yet how that pitch is landing, even in Pennsylvania.

In the suburbs that might be key to a Trump path to victory, Pennsylvania voters have shown opposition to the drilling and the massive pipelines required to move its product across the state. National polling shows growing skepticism of fracking.

Still, Biden's comments could add headaches for Democrats in oil-heavy states. Rep. Kendra Horn, an Oklahoma Democrat who flipped a Republican seat in 2018, tweeted that she disagreed with him.

"We must stand up for our oil and gas industry. We need an all-of-the-above energy approach that's consumer friendly, values energy independence and protects OK jobs," she wrote.

A statement from Scott Parker, the organization's content and rapid response manager, did not specifically criticize Biden and said neither candidate put forth realistic solutions to address the threat of climate change.

European oil giants in particular, like Royal Dutch Shell and BP, are investing in solar and wind energy, minimizing their financial risks if oil rigs go the way of coal-fired power plants in Western countries. But environmental groups say many major U.S. petroleum companies are still investing heavily in fossil fuel production while talking up what are often small efforts on climate change.