33 days until U.S. election: Chaos at the debate and good news for Biden

The first presidential debate has been described as a fiery display of shouting and unintelligible cross-talk, with U.S. President Donald Trump frequently cutting off Democratic challenger Joe Biden so much that, at one point, Biden urged the president: “Will you shut up, man?”

A deep conversation about foreign policy or how to mend a divided America, this was not.

The day after the debate, the U.S. Commission on Presidential Debates said it would introduce "additional structure" to ensure "a more orderly discussion" after many viewers criticized moderator Chris Wallace of Fox News, who sometimes had to shout to take back control.

What remains to be seen is whether or not the first televised debate — ​traditionally the most watched — will have an impact on the race.

And while the tete-a-tete may have been the U.S. election’s marquee event this week, there were several other major developments, including a damning New York Times report on Trump’s taxes and new questions about mail-in voting as the president openly cast doubt on the electoral process.

With little more than a month to go before election day, here’s a look at how the race for the White House is shaping up.

WHAT THE POLLS SAY 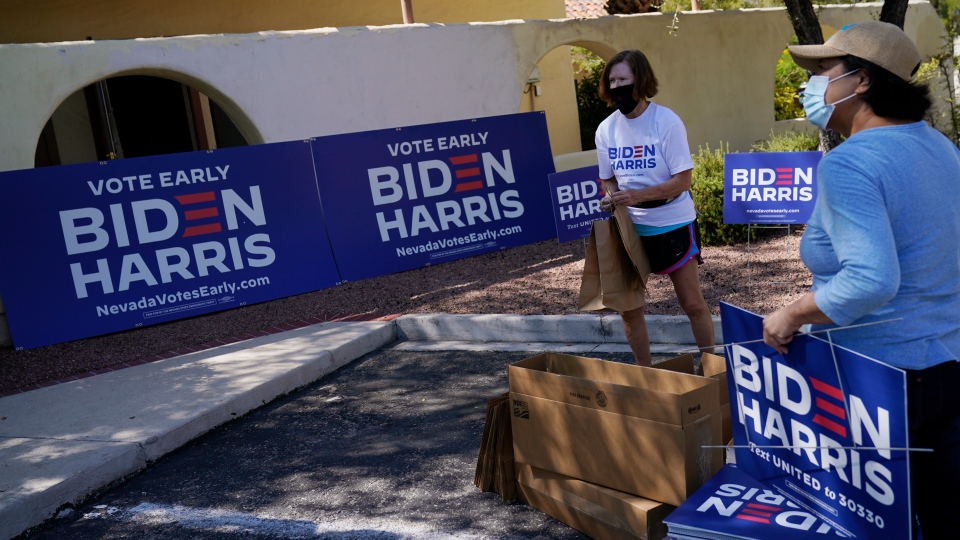 The big picture hasn’t changed since last week. Biden continues to hold a seven-point lead over Trump, according to tracking by the New York Times’ Upshot and FiveThirtyEight, while Real Clear Politics gives Biden a 6.5-point lead — half a point lower than this time last week.

On the state level, Trump has failed to make any significant in-roads in must-win states, like Wisconsin and Michigan, according to polls. Importantly, Biden’s lead in battleground Pennsylvania, considered one of the most likely tipping points this election, continues to be strong, with an average lead of 5.5 points, according to multiple pollsters.

The debate presented Trump with his biggest chance yet to shake up the consistently stable race and win over undecided voters, a group that isn’t expected to be as large as in 2016. But instant poll surveys — a measure of whether the debate changed viewers’ minds — contained little good news for the president.

Post-debate surveys showed viewers believed Biden won the debate, with a CBS poll suggesting 47 per cent saw Biden as at the winner, versus 40 per cent who thought Trump won. Data for Progress, which says its poll reflected the 2016 electorate, found that 51 per cent thought Biden won, versus 39 per cent for Trump.

Could the afterglow of a successful debate widen Biden’s lead? It’s possible. Debate winners often see a minor bump in the polls, but some experts believe the change is only temporary. If anything, Biden’s perceived win may simply mean the debate does little to influence the electorate. 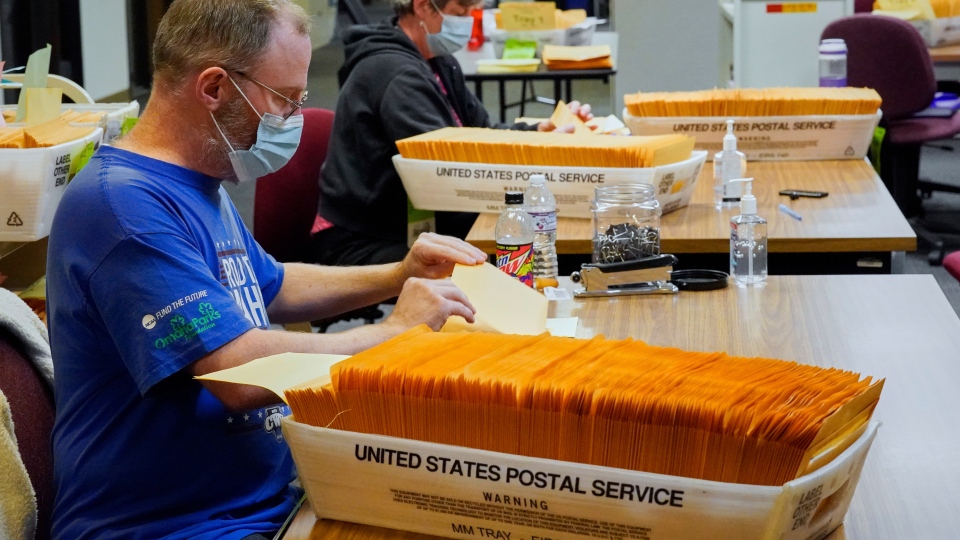 Registration for mail-in voting is breaking records in several U.S. states, including key battlegrounds like Pennsylvania and Florida, and state-level tracking suggests that Democrats are more likely than Republicans to vote by mail.

“This is going to be a fraud like you’ve never seen,” Trump said of mail-in voting, despite the fact that he has voted by mail in the past. “We might not know for months because these ballots are going to be all over.”

The line of attack isn’t new for Trump, but the debate represented his clearest refusal yet to commit to accepting the results of the election. In the past, White House spokesperson Kayleigh McEnany has said the president would accept the results of a “free and fair” election.

Mail-in voting has been part of American elections for decades, and the surge in interest this year has been largely attributed to efforts by voters to avoid line-ups on Nov. 3 due to COVID-19. Both parties have encouraged their supporters to register to vote early.

Absentee voting has already hit several bumps in the road. In South Carolina, voters have been confused by a series of court rulings over whether or not a witness is needed to sign mail-in ballots for November. In North Carolina — a red state that recent polling suggests may be leaning in Biden’s favour — Trump’s campaign committee has sued to block election officials from enforcing rule changes that could boost the number of ballots counted.

Other states have loosened rules around witness signatures to make it easier for people who live alone to vote during COVID-19.

When CTV News spoke with voters in Virginia a few weeks ago on the country’s first day of advance voting, several expressed a desire to vote in person to make sure their ballot was counted. 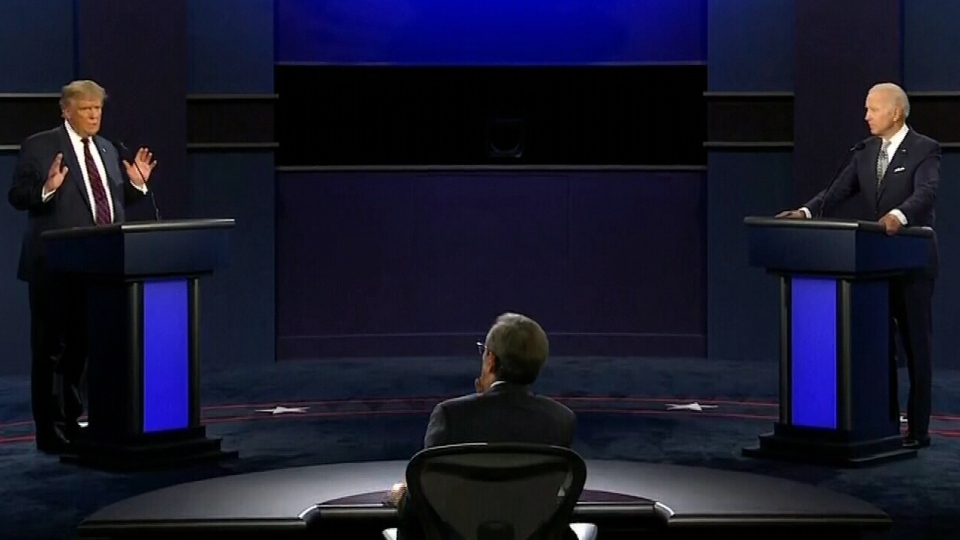 Trump has never released his tax returns, despite calls for him to do so for years, saying that he’s under audit and will release them when he can.

Last week, the New York Times dropped a bombshell report that suggests Trump hasn’t paid any federal income tax for 10 of the last 15 years. In the year he won the presidency and his first year in the White House, Trump paid just US$750 in federal income taxes, the Times reported.

Trump responded by insisting that he pays “a lot” of taxes, including state taxes, but refused to say how much. At the debate, Trump said he paid “$38 million one year … $27 million one year,” as Biden repeated for him to “show us your tax returns.” 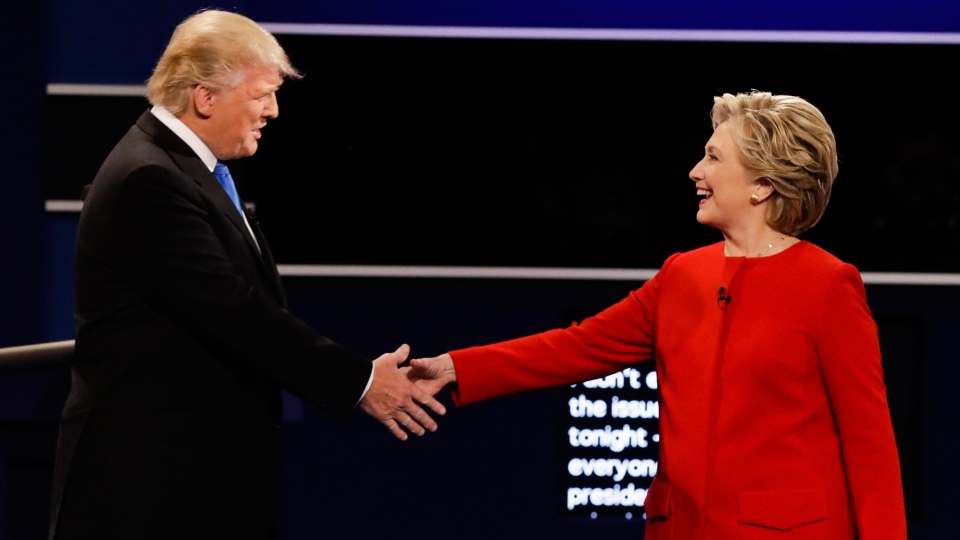 For your weekly reminder of the state of the race this time in 2016: Hillary Clinton and Donald Trump had just faced off in what was then the most-watched presidential debate in American history. Days later, Trump launched a Twitter attack against an ex-beauty queen and encouraged Americans to watch a sex tape that he said would prove that she had a “disgusting” sexual past.

Clinton was facing controversy of her own after a leaked tape from a fundraiser captured her suggesting that Bernie Sanders supporters were “children of the Great Recession” who were left living in their parents’ basements.

And while plenty of attention is being given to this year’s influx in advance voting, similar stories were coming out in 2016. A “surge” of early voting was underway this time four years ago, with reports that Clinton was hitting guideposts set in the past two elections and could benefit in red states like Georgia, North Carolina and perpetually swingy Florida.

Of course, Trump went on to win all three of those states.

Trump, Biden go on offence in states they're trying to flip

Trump, Biden square off, from a distance, in separate town halls