12 days until U.S. election: The mad dash for votes as polls suggest a tightening race

TORONTO -- With less than two weeks to go before the U.S. election, U.S. President Donald Trump and Democratic challenger Joe Biden have hit the busiest stretch of campaigning, and which states they’re visiting may offer insights into the state of the race.

Trump spent the week flying from one must-win state to the next, holding packed “Make America Great Again” rallies in Pennsylvania, Arizona, Florida, Georgia and North Carolina. Meanwhile, Biden and his running-mate Kamala Harris held their own events in North Carolina, Florida, Michigan and Ohio.

Those states all have one obvious thing in common: Trump won every single one in 2016.

Political observers have suggested that these travel schedules indicate Trump is playing defence and trying to hold onto his old path to victory, rather than hustling to steal Democratic-leaning states that Hillary Clinton narrowly won in 2016, such as Nevada and New Hampshire.

This week also saw a deluge of election-related news, from a stunning announcement from the FBI on election meddling from Iran and Russia meant to benefit Trump to eye-popping early voting figures to a strange story about Trump’s personal lawyer Rudy Giuliani.

Twelve days ahead of the vote, here’s what you need to know.

WHAT THE POLLS SAY 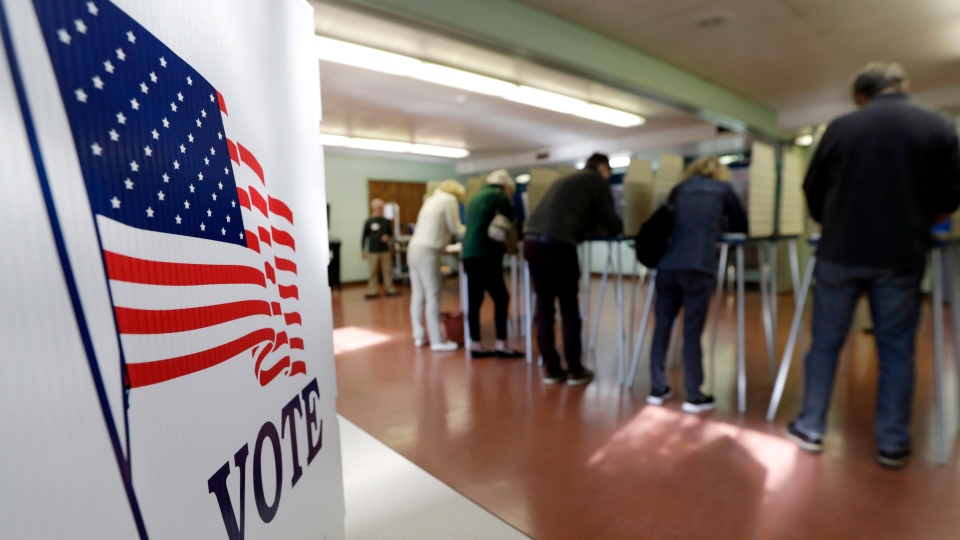 Since then there has been some small but noticeable changes. Biden continues to hold a 9.9-point lead, according to FiveThirtyEight, while RealClearPolitics — which had Biden up by 9.4 points last week — now gives him a 7.5 point lead.

For context, Hillary Clinton was leading Trump nationally this time in 2016 by 6.1 points.

On the statewide level, some key races appear to be tightening.

Biden leads Florida by a narrow 1.6 points, down from 4.5 points earlier in October, according to RealClearPolitics. Polls from Pennsylvania — possibly the most coveted state on the 2020 map — show Biden leading by 4.2 points, down from 7 points in mid-October. Wisconsin shows a 4.6-point lead for Biden, down from 6.3 points last week. 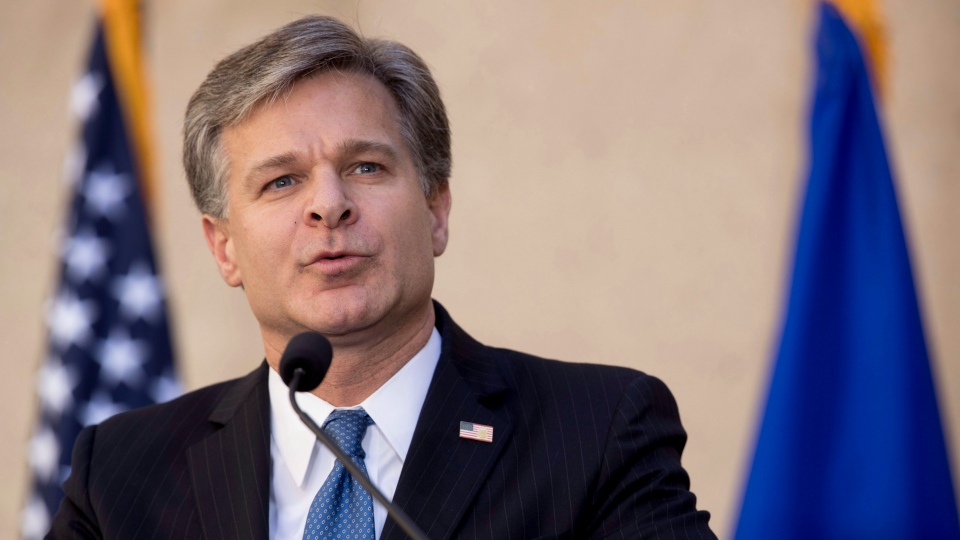 The FBI held an emergency press conference Wednesday evening and revealed that Russia and Iran have obtained voter registration data in an effort to interfere with the U.S. election, and that Iran is behind emails designed to intimidate voters in key battleground states into voting for Trump.

Democratic voters in at least four states, including Florida and Pennsylvania, have received emails purporting to be from the far-right group Proud Boys. The emails warned that “we will come after you” if the recipient didn’t vote for Trump. The sender also claimed to know whom the recipient would vote for.

Those emails are fake, the FBI said, and have been traced back to Iran.

The emails were linked to contacts obtained from voter registration lists, which can include detailed personal information such as home addresses, party affiliation and phone numbers.

"These actions are desperate attempts by desperate adversaries," said John Ratcliffe, the top intelligence official in the U.S. 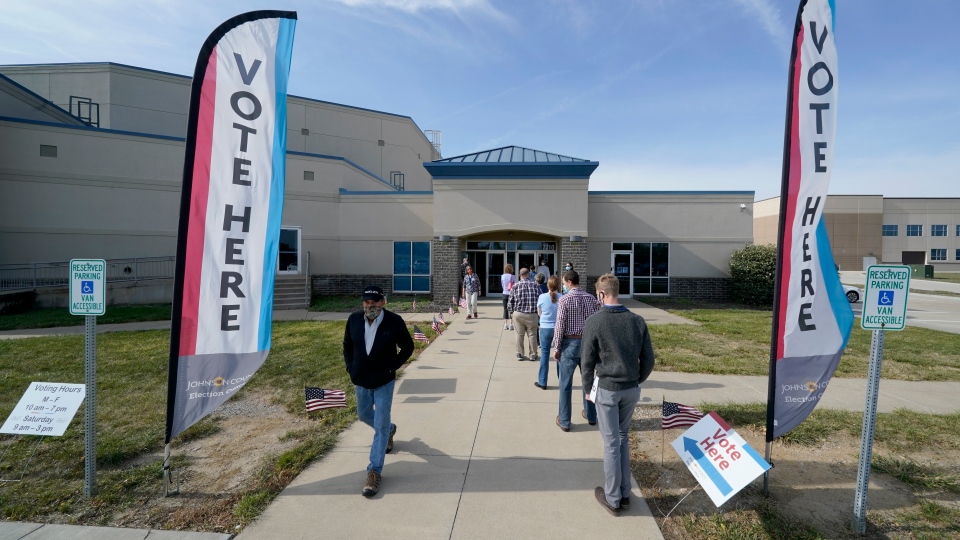 The pandemic was expected to boost the number of early voters as Americans look for a safe way to cast their ballots. The magnitude of that increase is already breaking records.

According to the non-partisan U.S. Elections Project, more than 41.5 million Americans have already voted by mail or by advance in-person voting. That’s equivalent to 30 per cent of all votes cast in 2016.

The biggest increase was recorded in Texas, where more than 5.3 million Texans have cast early ballots. That’s more than the total 4,685,047 votes Trump received in Texas in 2016.

Early voting figures also offer some hope for Democrats, with a caveat. Fifty-two per cent of early votes have come from registered Democrats, compared to 26 per cent from Republicans and 21 per cent from parties with no affiliation.

However, it’s important to note that not all states report party registration statistics, including Texas, and vote-rich, reliably blue California, where 4.5 million people have already voted, could skew those numbers in Democrats’ favour.

MONEY IN THE BANK 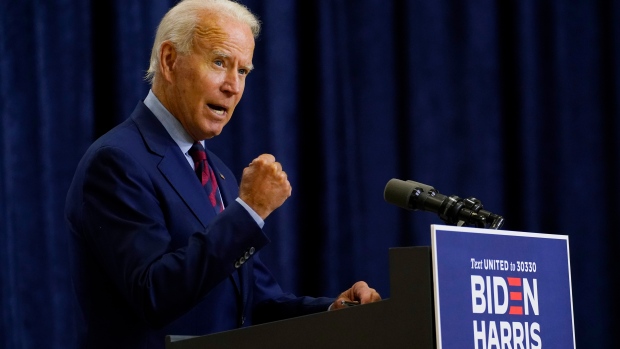 The race for the White House is expensive, with the 2016 race costing both candidates an estimated $2.4 billion, according to campaign finance watchdog OpenSecrets.org. At this point in the fundraising race, Biden holds an edge over Trump.

Biden has repeatedly broken his own election fundraising records and entered October with $177.3 million in the bank, nearly triple Trump’s $63.1 million, according to filing with the Federal Election Commission reported by the New York Times.

That cash advantage could make a difference in the race for high-budget advertising. However, Trump’s campaign likes to point out that he won in 2016 despite being outspent by Clinton. 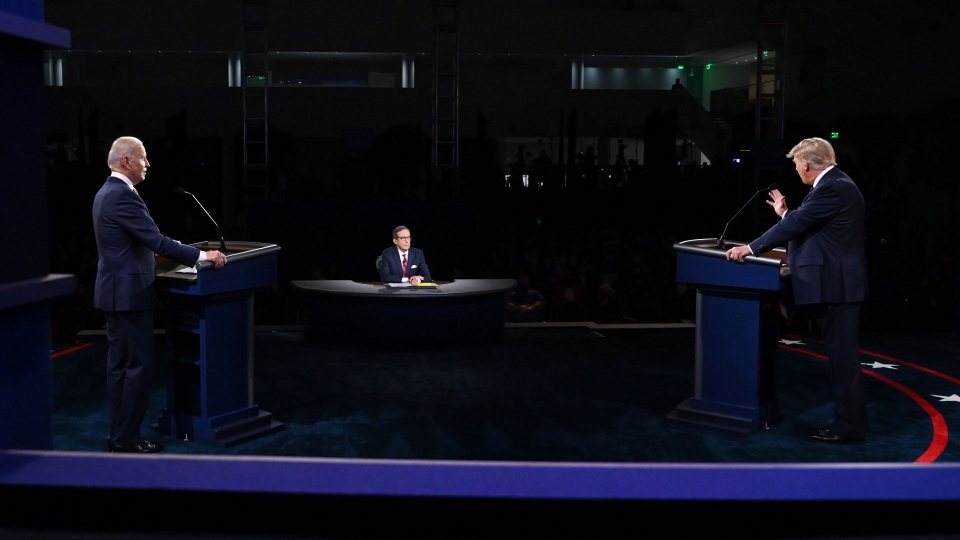 Tonight’s debate is happening, despite concerns earlier this month that Trump’s COVID-19 diagnosis could scrap those plans. Held in Nashville, the 90-minute showdown will begin at 9:30 p.m. and will cover six topics: "Fighting COVID-19," "American Families," "Race in America," "Climate Change," "National Security" and "Leadership."

The debate marks the first time the candidates will be muted for portions of the debate. During the candidates’ opening remarks for each topic, their opponent’s mic will be on mute to allow the candidate to clearly answer the question.

The change comes after a tumultuous first debate in which Trump repeatedly interrupted Biden, with Biden at one point imploring the president, “Will you shut up, man?”

Biden has taken a break from the campaign trail and spent the last two days preparing for the debate, while Trump has continued to carry out a busy schedule of rallies and public events.

Trump has already begun casting doubt on the debate moderator, NBC’s Kristen Welker, telling supporters at a rally earlier this week that she is incapable of being objective. 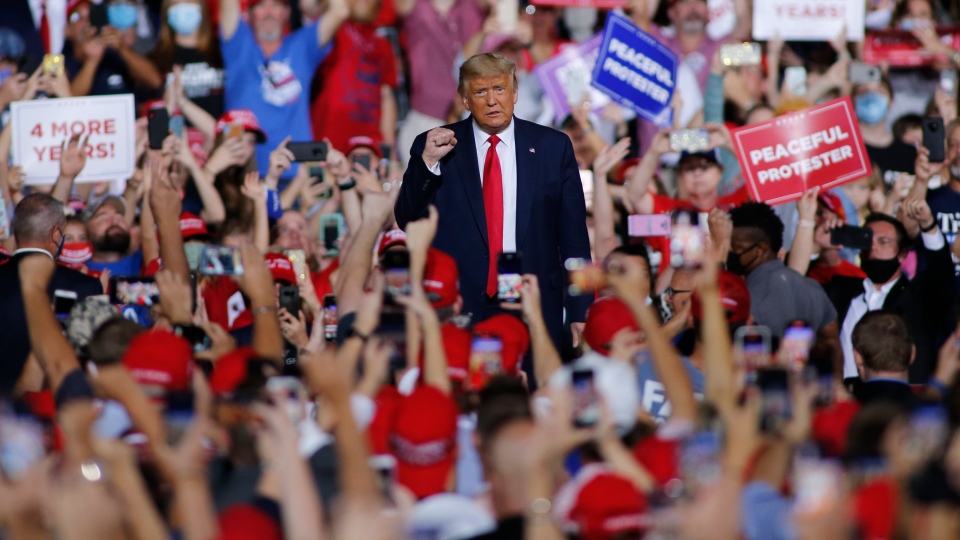 Last week, the New York Post published a report — unconfirmed by other news organizations and considered dubious by analysts — that included a supposed email from a Ukrainian official thanking Hunter Biden for arranging a meeting at the White House in 2015 for him to meet Joe Biden.

Biden’s campaign says the meeting never happened and pointed to Biden’s publicly published schedule from his time in the White House, which shows no such meeting.

Regardless, Trump has seized on the report and called on Attorney General William Barr to immediately launch an investigation into the unverified claims.

Julian Zelizer, a presidential historian at Princeton University, told the Associated Press that such an investigation in the middle of a U.S. election would be a baldly partisan move.

"We are seeing a total politicization of the justice system in the final stages of an election,” Zelizer said.

Trump has not specified what crime he believes the Bidens have committed. 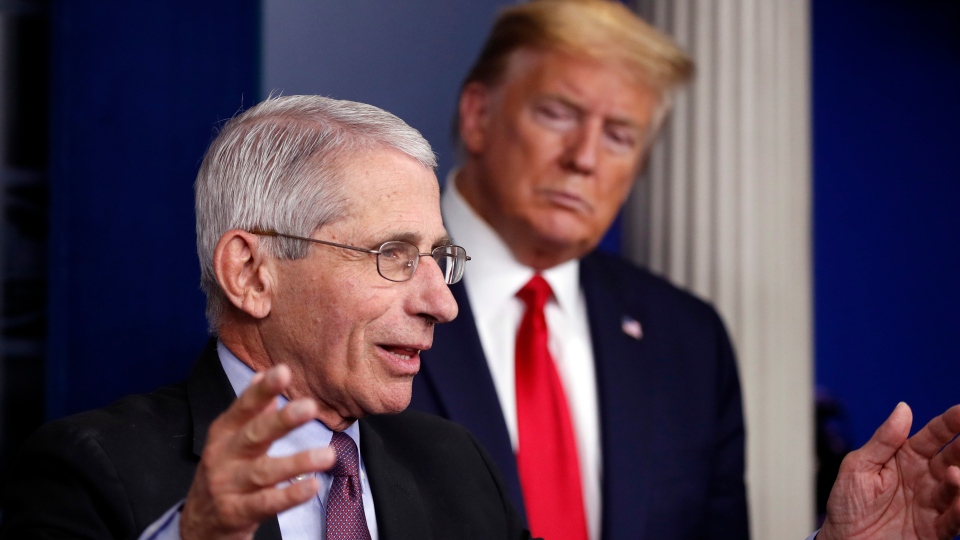 Trump has ratcheted up attacks against one of his closest scientific advisors on COVID-19, suggesting that Americans are sick of listening to Dr. Anthony Fauci and accusing him of not being a “team player.”

Trump has repeatedly bad-mouthed Fauci during the pandemic, calling him a “disaster” and accusing him of being a Democrat.

Fauci has refused to get into a public fight with Trump. Instead, he recently used a quote from “The Godfather” to describe his relationship with Trump, saying it’s “nothing personal, strictly business."

Trump has also tried to cast doubt on an upcoming interview with “60 Minutes” which he abruptly cut short. Trump sat down with host Lesley Stahl for about 45 minutes on Tuesday, but stopped the interview early and said they had enough material, according to CNN.

Trump then posted a video on Twitter that showed Stahl not wearing a mask inside the White House.

CNN reported that a person familiar with the situation said Trump’s video shows Stahl speaking with her producers immediately after Trump ended the interview, and that she had not had the chance yet to get her personal belongings and put her mask back on. Stahl wore a mask from when she entered the White House to the moment before the interview, the source said, when both she and the president removed their masks. 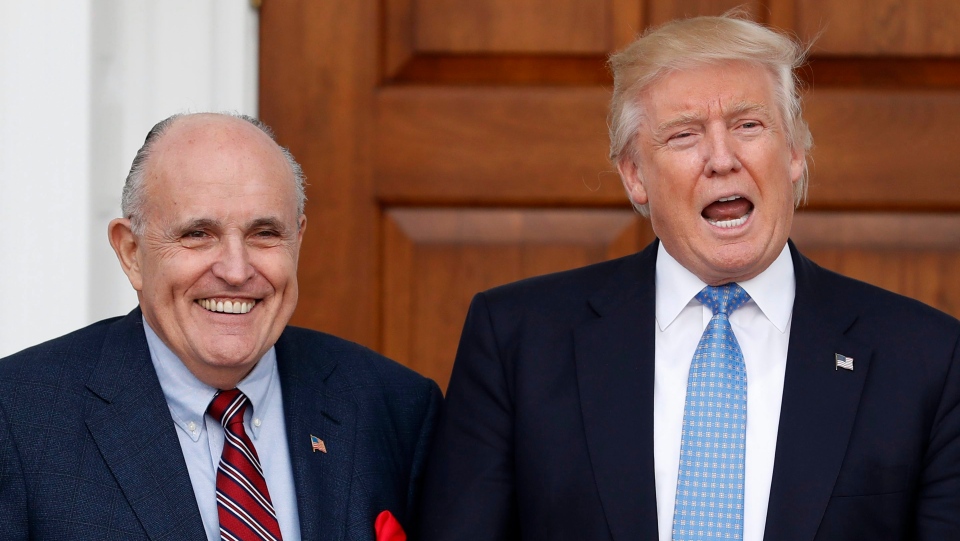 In what may turn out to be one of the strangest headlines of the U.S. election, Trump’s personal attorney Rudy Giuliani appears to be implicated in a compromising scene in the upcoming “Borat 2” film.

According to multiple reports, Giuliani is shown in the film with his hand tucked into his pants as he talks to an actress who is pretending to be a TV journalist in the mockumentary. The scene was filmed with hidden cameras in a hotel room, and Giuliani was told he was being interviewed about the Trump administration's response to COVID-19.

Giuliani called the video "a complete fabrication" and said he was tucking in his shirt after removing his recording equipment.

"At no time before, during, or after the interview was I ever inappropriate. If Sacha Baron Cohen implies otherwise he is a stone-cold liar," he said in a tweet Wednesday.

(1) The Borat video is a complete fabrication. I was tucking in my shirt after taking off the recording equipment.

At no time before, during, or after the interview was I ever inappropriate. If Sacha Baron Cohen implies otherwise he is a stone-cold liar.

The scene was filmed back in July. “Borat 2” is set to be released this Friday. 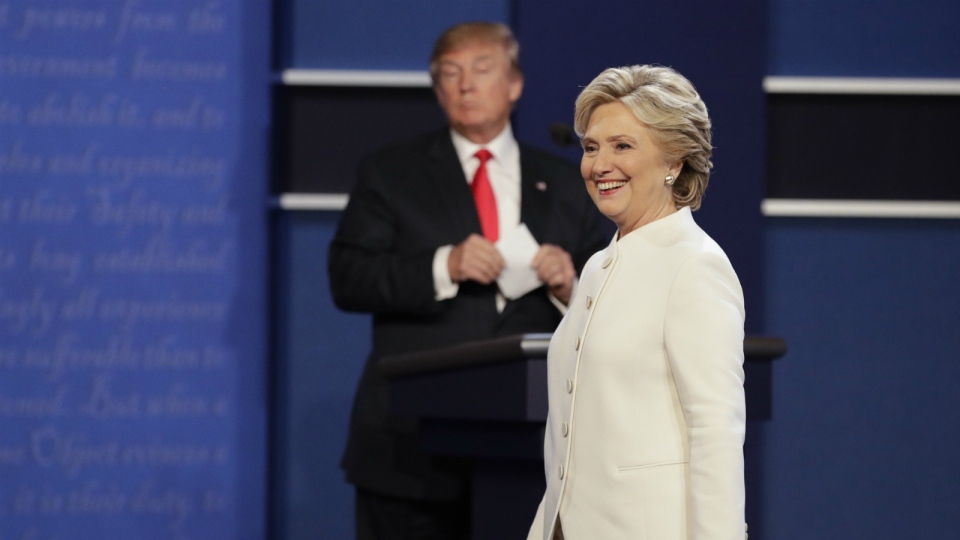 Trump has repeatedly refused to say if he’ll accept the results of this year’s election as he casts doubt on the validity of mail-in voting. This time four years ago, he was doing the same thing.

"I will keep you in suspense,” Trump said during the final debate when asked if he would concede in the event he lost.

Trump later appeared to inch back from those comments, promising to accept the results “if I win.”

The final debate also spawned the beginning of the term “nasty woman,” an accusation that Trump lobbed at Clinton. Clinton and her supporters co-opted the term as a badge of honour, and streams for Janet Jackson’s 1986 hit “Nasty” went up 250 per cent.

On this side of the border, former prime minister Jean Chretien weighed in on how he viewed Trump’s campaign, calling it “unbelievable” and accusing Trump of “taking away the dignity of public life.”

Speaking of Trump, Chretien added "apparently there's no pill against something like stupidity."