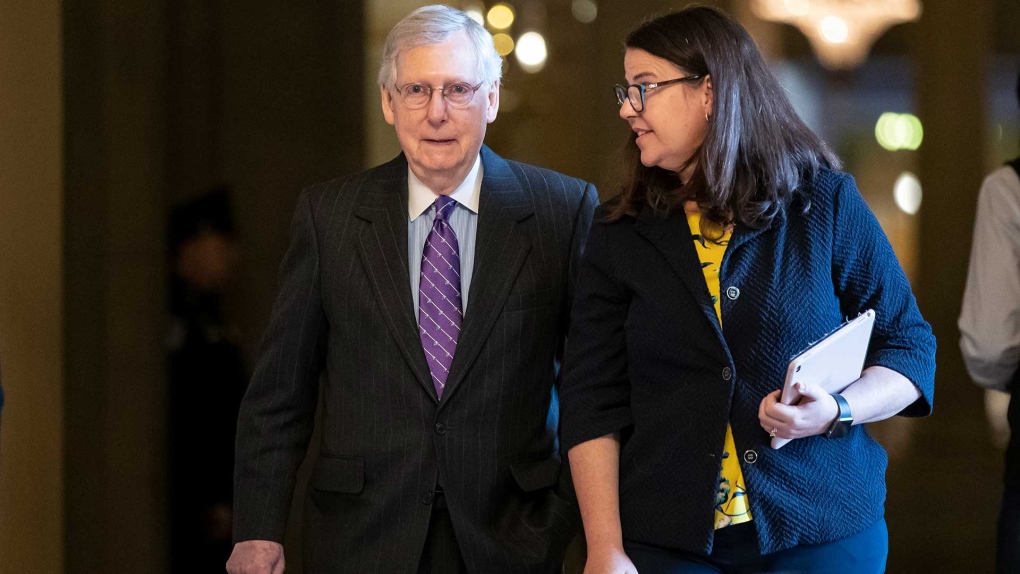 Speaking in his home state of Kentucky, the Republican leader said the country needs to "learn how to behave better, how to be able to disagree without anger."

McConnell is a key ally of U.S. President Donald Trump and has referred to himself as the "Grim Reaper" for his strategy of burying the legislative priorities of House Democrats in the GOP-led Senate.

On Monday, the senator listed incivility as the country's biggest problem.

"We have a behavioural problem," McConnell said in a speech after receiving an award from the Kentucky Electric Cooperatives at the group's annual meeting. "People are acting out and it's not, I don't think, limited to one ideological place or another. You've just got a lot of people engaging in bad behaviour."

"If that's what he believes, that this is such a stain on our politics, the lack of civility, does he regret the way he has allowed his own campaign to behave?" she said Monday.

McConnell didn't mention the House impeachment inquiry into Trump's dealings with Ukraine or any other emotionally charged issues for prompting his remarks. The senator later told reporters that his motivation was last year's acrimonious confirmation process for Supreme Court Justice Brett Kavanaugh.

Asked if Trump, known for his combative tweets, was partly to blame for stoking tensions, McConnell replied: "I think we have a civility problem and I didn't confine it to just liberals. I think it's across the board."

McConnell did single out college campuses in his speech.

"You read stories of young people, incentivized I think by the faculty actually on college campuses, who don't want to hear anything they may disagree with," he said. "It might upset them to be exposed to a point of view that they don't always subscribe to -- being brilliant, of course, and knowing everything at 18. I think that's troublesome."

McConnell, the top-ranking Republican in Congress, said civility is an "important thing" in a democracy. He vowed to do his part to steer political discourse away from angry tones.

"I intend, for what little impact I can have on that, not to act that way," he said. "We have plenty of incentive to get angry. But as you may have noticed, I try to stay calm, be respectful and don't get caught up in these intense debates that we have."

The senator differentiated between the heat of campaigns and the aftermath, when it's time to govern.

"The campaigns, of course, are always, shall I say, hot salsa, but the governing part doesn't need to be that way," McConnell said in his speech. "And I can assure you in the Senate it's not that way."

McConnell is seeking a seventh Senate term in 2020.

He is known for his bare-knuckled campaign style lambasting or lampooning his opponents, beginning with his first Senate race when he unseated Democrat Walter "Dee" Huddleston by questioning his attendance record. In next year's race, McConnell has already set his sights on retired Marine combat pilot Amy McGrath, among the Democrats vying to challenge him.

McConnell also didn't mention emotional protests that occurred outside his home earlier this year while he was recovering from a shoulder fracture. Protesters were trying to pressure McConnell to endorse gun control measures after mass shootings in El Paso, Texas, and Dayton, Ohio.