Amazon workers in Alabama get a do-over in union election 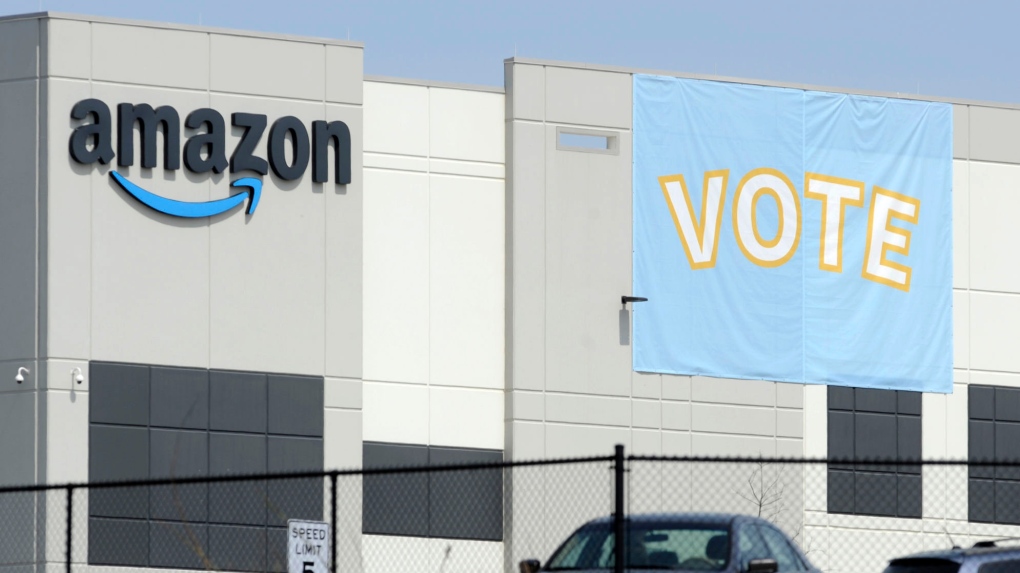 In this Tuesday, March 30, 2021 file photo, a banner encouraging workers to vote in labour balloting is shown at an Amazon warehouse in Bessemer, Ala. (AP Photo/Jay Reeves, File)

NEW YORK -- The National Labor Relations Board has ordered a new union election for Amazon workers in Bessemer, Alabama, based on objections to the first vote that took place in April.

The move announced Monday is a blow to Amazon, which spent about a year aggressively campaigning for warehouse workers in Bessemer to reject the union, which they ultimately did by a wide margin.

The board has not yet determined the date for the second election and it hasn't determined whether it will be conducted in person or by mail.

The rare call for a do-over was first announced by the Retail, Wholesale and Department Store Union, which spearheaded the union organizing movement.

In a 20-page decision, the regional director for the NLRB Lisa Henderson focused much attention on Amazon's installation of a U.S. Postal Service mail box at the main employee entrance, which may have created the false impression that the company was the one conducting the election process. Henderson also rejected Amazon's argument that it was making voting easier and was trying to encourage as high a turnout as possible.

"The employer's flagrant disregard for the board's typical mail-ballot procedure compromised the authority of the board and made a free and fair election impossible," Henderson said in her decision. "By installing a postal mailbox at the main employee entrance, the employer essentially highjacked the process and gave a strong impression that it controlled the process. This dangerous and improper message to employees destroys trust in the board's processes and in the credibility of the election results."

The RWDSU charged Amazon with illegal misconduct during the first vote. In August, the NLRB hearing officer who presided over the case determined that Amazon violated labour law and recommended Henderson set aside the results and direct another election.

About 53% of the nearly 6,000 workers cast ballots during the first election.

"Our employees have always had the choice of whether or not to join a union, and they overwhelmingly chose not to join the RWDSU earlier this year," Nantel said. "It's disappointing that the NLRB has now decided that those votes shouldn't count."

Stuart Appelbaum, president of the RWDSU, saw the NLRB decision as a victory.

"Today's decision confirms what we were saying all along — that Amazon's intimidation and interference prevented workers from having a fair say in whether they wanted a union in their workplace — and as the Regional Director has indicated, that is both unacceptable and illegal," he said in a statement. "Amazon workers deserve to have a voice at work, which can only come from a union."

The order for a new election stands unless Amazon files a request within the next 10 days for a review with the full board of NLRB. That could set up one of several scenarios, including a stop to the election altogether if the full board reverses the regional director's decision, or a nullification of the results if the board sides with Amazon after the union vote has already occurred.

But even if a second election is allowed to move forward, labour experts say a union victory remains a long shot. Seattle-based Amazon will likely appeal and try to delay another vote. And even when an election is held, workers may chose to vote against joining a union again. Last time around, 1,798 workers rejected the union and 738 voted in favor of it.

A repeat of the election means another battle for Amazon with the RWDSU. The first election garnered nationwide attention and put a spotlight on how Amazon treats its workers. It was the biggest union push in Amazon's history and only the second time that an organizing effort from within the company had come to a vote.

Pro-union employees at the Bessemer facility said they spent 10-hour shifts on their feet in the warehouse, where online orders are packed and shipped, and didn't have enough time to take breaks. A union could force Amazon to offer more break time or higher pay, those workers said. Amazon, meanwhile, argued that it already offered more than twice the minimum wage in Alabama plus benefits without workers having to pay union dues.

Amazon has been fighting two different attempts by workers to unionize in the past year.

Former Amazon employee Christian Smalls is organizing an effort at a distribution centre in Staten Island, N.Y., without the help of a national sponsor. The labour board was expected to hold a hearing to determine whether there was sufficient interest to form a union there but less than two weeks earlier, the group led by Smalls withdrew its petition. The workers, however, can refile.

Other organizing efforts are afoot beyond Amazon, including by workers at three separate Starbucks stores in and around Buffalo, N.Y. Meanwhile, thousands of unionized workers at Kellogg Co. remain on strike amid widespread worker unrest across the country.