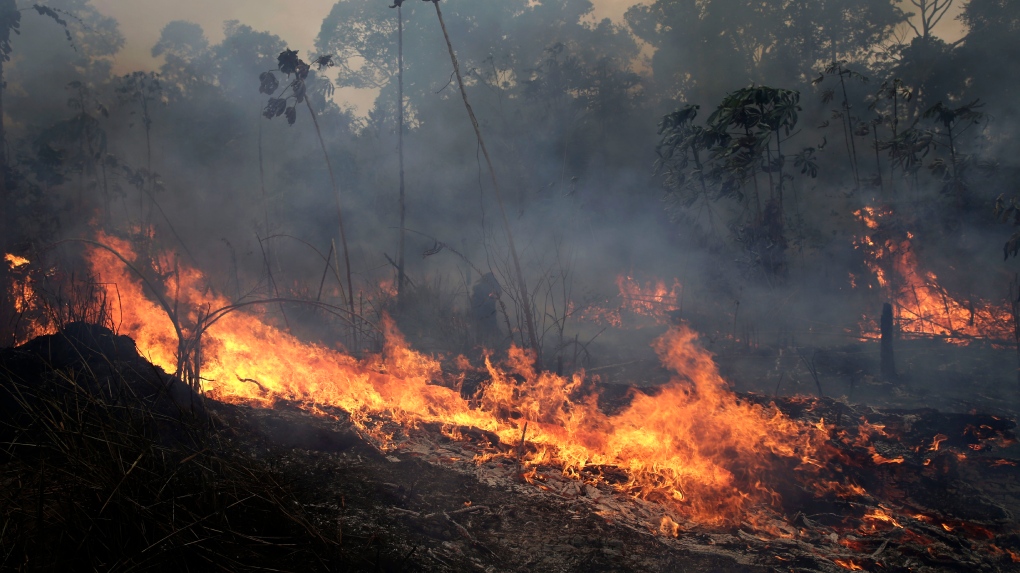 A fire burns along the road to Jacunda National Forest, near the city of Porto Velho in the Vila Nova Samuel region which is part of Brazil's Amazon, Monday, Aug. 26, 2019. (AP Photo/Eraldo Peres)

Fires in the Amazon went down 35.5% in September compared to August, with 19,925 fires, according to data published Tuesday by the National Institute for Space Research.

Official data going back to 1998 show that historically, September tends to have more fires than August. Fire is regularly used to clear land by ranchers and farmers as well as illegal loggers and miners.

But in July and August, parts of the Amazon burned at a pace unseen since 2010, fueling global worries about climate change.

Scientists say the vast rainforest is a bulwark against global warming, as its lush vegetation absorbs heat-trapping carbon dioxide from the atmosphere. The moisture given off by its trees also affects rainfall patterns and climate across South America and beyond.

International outcry led President Jair Bolsonaro to ban fires in the Amazon for 60 days and send federal troops to help combat the blazes.

But the Cerrado region, a vast tropical savanna, seems to now be home of most of the fires, which went up 76% in September compared to August.

State workers at some of Brazil's environmental agencies say they are feeling increasing pressure from illegal loggers and miners, galvanized by Bolsonaro's pro-development agenda.

Bolsonaro has repeatedly said he wants to promote economic development in the Amazon and regularize small-scale illegal mining, known as garimpo. He has criticized at times the work carried out by state environmental agencies.

"I have to comply with the law," Bolsonaro told a small crowd of illegal miners gathered outside the Planalto Palace in Brasilia, where he met on Tuesday with garimpos representatives and his mining and energy minister.

Bolsonaro mentioned that if he could find a legal frame for it, he possibly could send troops to the state of Para to help wildcat miners carry out their activities.

"The interest in the Amazon is not about the indigenous or the tree, it's about the minerals!" Bolsonaro told them, criticizing once again foreign countries meddling with what he sees as a Brazilian domestic matter.