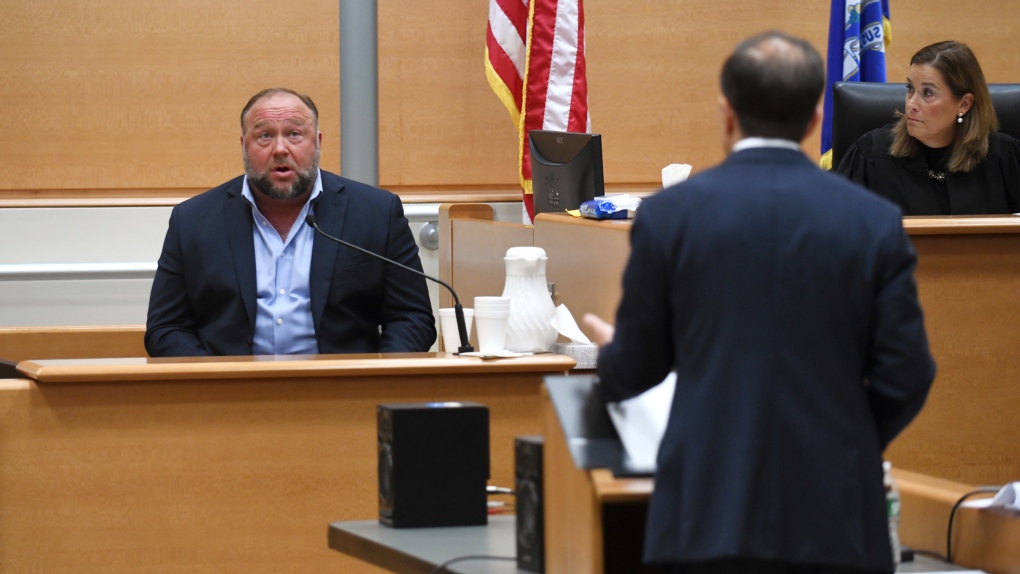 Alex Jones took the stand Thursday at his Connecticut defamation trial, acknowledging he had promoted the conspiracy theory that the 2012 Sandy Hook massacre was a hoax, but angrily refusing to keep apologizing for that.

More than a dozen relatives of the 26 shooting victims showed up to observe his often contentious testimony in Waterbury Superior Court, about 20 miles (32 kilometres) from Newtown, where the shooting occurred.

Jones was found liable last year by default for damages to plaintiffs without a trial, for what the judge called his repeated failures to turn over documents to their lawyers. The six-member jury is now deciding how much Jones and Free Speech Systems, parent of Jones' Infowars media platforms, should pay the families for defaming them and intentionally inflicting emotional distress.

On Thursday, Jones admitted calling parents "crisis actors" on his show and saying the shooting was "phony as a three-dollar bill."

Plaintiff attorney Christopher Mattei accused Jones of putting targets on the parents' backs, pointing to the family members in the courtroom and saying "these are real people."

"Just like all the Iraqis you liberals killed and love," Jones responded. "Just, you're unbelievable. You switch on emotions, on-and-off when you want. You're just ambulance chasing."

The exchange went on with Mattei pointing out that the families in the courtroom had "lost children, sisters, wives, moms."

"Is this a struggle session?" said Jones, who in recent years has acknowledged the shooting was real. "Are we in China? I've already said I'm sorry hundreds of times and I'm done saying I'm sorry."

After excusing the jury for the day, Judge Barbara Bellis admonished both sides, saying further outbursts would lead to a contempt hearing.

Bellis had begun the day by going over the topics that Jones could not mention in his testimony: free speech rights; the Sandy Hook families' US$73 million settlement this year with gun-maker Remington (the company made the Bushmaster rifle used to kill the victims at Sandy Hook); the percentage of Jones' shows that discussed Sandy Hook; and whether he profited from those shows or a similar case in Texas.

"This is not the appropriate forum for you to offer that testimony," Bellis said. Jones indicated that he understood.

But the jury had to be sent out of the courtroom several times while attorneys argued about the scope of Jones' answers.

"You're going to get your exercise today, for those of you who wear Fitbits," the judge told jurors.

Earlier in the trial, family members of the victims have given often emotional testimony describing how they endured death threats, in-person harassment and abusive comments on social media. Some moved to avoid the abuse.

Jones' shows had portrayed the Sandy Hook shooting as staged by crisis actors as part of gun control efforts.

Testimony also has focused on website analytics data run by Infowars employees showing how its sales of dietary supplements, food, clothing and other items spiked around the time Jones talked about the Sandy Hook shooting.

Evidence, including internal Infowars emails and depositions, also shows dissention within the company about pushing the hoax lies.

Pattis is arguing that any damages should be limited and accused the victims' relatives of exaggerating the harm the lies caused them.

Jones has already been found liable by default in two similar lawsuits over the Sandy Hook hoax lies in his hometown of Austin, Texas, where a jury in one of the trials ordered Jones last month to pay nearly US$50 million in damages to the parents of one of the children killed. A third trial in Texas is expected to begin near the end of the year.

Jones was asked Thursday about a page on his Infowars site that called the trial a "kangaroo court" and included a graphic showing the judge with lasers shooting from her eyes. He said the page was created by his staff, but called it a "good report."

He was asked about advertisements on that page and other Sandy Hook content, as well as daily profit reports. Jones said he could not answer thoses questions, but denied he saw the trial as a marketing opportunity.

Later, when asked about his fundraising and items offered in his Internet store, he made sure to give out the URL where people could buy cryptocurrency to support his company.

"That will end up as a clip on your show tonight," Mattei said. "You're advertising for your cryptocurrency page?"

"I mean people want to keep us in the fight, so I mean I hope whoever the big whales are that would give us money before keep doing it," Jones said.

Jones, who is expected back on the stand Friday, made brief comments to reporters while leaving the courthouse.

"The First Amendment will prevail," he said. "The American people will never be silenced."

Health Canada says Canadians ages 12 and up can now be given the Pfizer-BioNTech COVID-19 booster vaccine that targets the BA.4 and BA.5 strains of the Omicron variant.

An Ottawa police officer pleaded guilty to misconduct for donating money to 'Freedom Convoy' fundraisers during the protest in downtown Ottawa.

The number of people hospitalized with COVID-19 has reached a two-month high in Ontario, as most public health indicators now point to a fall resurgence of the virus.