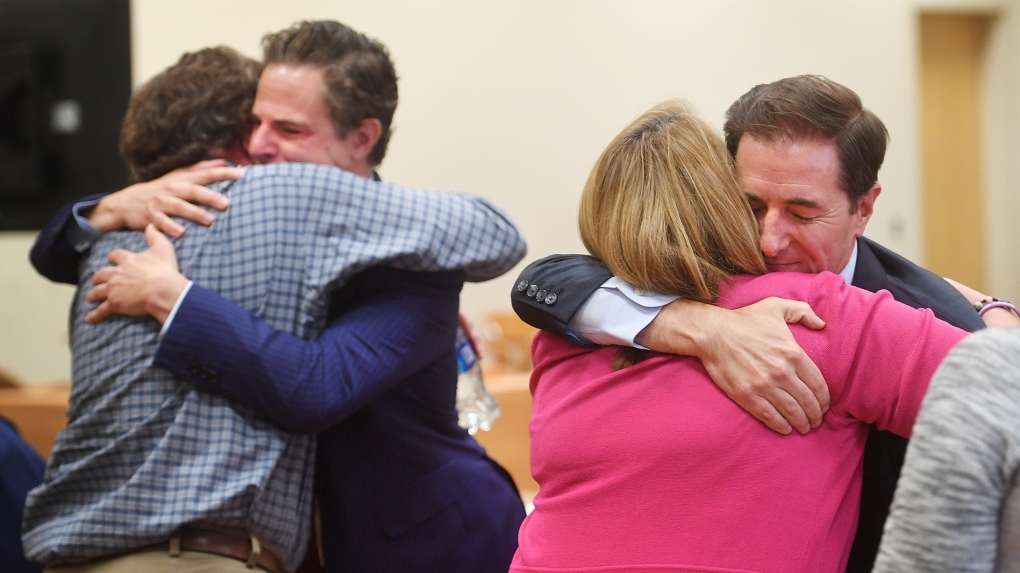 Infowars host Alex Jones and his company were ordered by a judge Thursday to pay an extra US$473 million for promoting false conspiracy theories about the Sandy Hook school massacre, bringing the total judgment against him in a lawsuit filed by the victims' families to a staggering US$1.44 billion.

"The record clearly supports the plaintiffs' argument that the defendants' conduct was intentional and malicious, and certain to cause harm by virtue of their infrastructure, ability to spread content, and massive audience including the infowarriors," the judge wrote in a 45-page ruling.

Christopher Mattei, a lawyer for the Sandy Hook families, said he hopes the award sends a message to conspiracy theorists who profit from lies.

"The Court recognized the `intentional, malicious ... and heinous' conduct of Mr. Jones and his business entities," Mattei said in a statement.

On his show Thursday, Jones called the award "ridiculous" and a "joke" and said he has little money to pay the damages.

"Well, of course I'm laughing at it," he said. "It'd be like if you sent me a bill for a billion dollars in the mail. Oh man, we got you. It's all for psychological effect. It's all the Wizard of Oz ... when they know full well the bankruptcy going on and all the rest of it, that it'll show what I've got and that's it, and I have almost nothing."

Eight victims' relatives and the FBI agent testified during a monthlong trial about being threatened and harassed for years by people who deny the shooting happened. Strangers showed up at some of their homes and confronted some of them in public. People hurled abusive comments at them on social media and in emails. Some received death and rape threats.

Six jurors ordered Jones to pay US$965 million to compensate the 15 plaintiffs for defamation, infliction of emotional distress and violations of Connecticut's Unfair Trade Practices Act.

Jones, who lives and works in Austin, Texas, has bashed the trial as unfair and an assault on free speech rights. He says he will appeal the verdicts. He also has said he doesn't have the money to pay such huge verdicts, because he has less than US$2 million to his name -- which contradicted testimony at a similar trial in Texas. Free Speech Systems, meanwhile, is seeking bankruptcy protection.

Jones said Thursday that he has only a "couple hundred thousand dollars" in his savings account.

Jones' lawyer, Norm Pattis, wrote in a text message to the The Associated Press, "To paraphrase Karl Marx, the verdict was tragedy, this latest ruling is farce. It makes our work on appeal that much easier."

Bellis found Jones and Infowars' parent company liable for damages without a trial last year, as a consequence for what she called his repeated failures to turn over many financial documents and other records to the plaintiffs. After the unusual "default" ruling, the jury was tasked only with deciding on the amount of compensatory damages and whether punitive damages were warranted.

Jones says that he turned over thousands of documents and that the default ruling deprived him of his right to present a defense against the lawsuit.

The punitive damages include about US$323 million for the plaintiffs' attorney fees and costs and US$150 million for violations of the Unfair Trade Practices Act.

In Connecticut, punitive damages for defamation and infliction of emotional distress are generally limited to plaintiffs' legal fees. The Sandy Hook plaintiffs' lawyers are to get one-third of the US$965 million in compensatory damages under a retainer agreement.

But there is no cap on punitive damages for violations of the Unfair Trade Practices Act. The plaintiffs had not asked for a specific amount of punitive damages, but under one hypothetical calculation they said such damages could be around US$2.75 trillion under the law.

In a similar trial in Texas in August, Jones was ordered to pay nearly US$50 million to the parents of another child killed in the Sandy Hook shooting for calling the massacre a hoax. A forensic economist testified during that trial that Jones and Free Speech Systems have a combined net worth as high as US$270 million.

Jones hawks nutritional supplements, survival gear and other products on his show, which airs on the Infowars website and dozens of radio stations. Evidence at the Connecticut trial showed his sales spiked around a time he talked about the Sandy Hook shooting, leading the plaintiffs' lawyers to say he was profiting off the tragedy.

In documents recently filed in Free Speech Systems' bankruptcy case in Texas, a budget for the company for Oct. 29 to Nov. 25 estimated product sales would total US$2.5 million, while operating expenses would be about US$740,000. Jones' salary was listed at US$20,000 every two weeks.

On Wednesday, Bellis, the Connecticut judge, ordered Jones to not move any of his assets out of the country, as the families seek to attach his holdings to secure money for the damages. Jones, meanwhile, has asked the judge to order a new trial or at least reduce the compensatory damages to a "nominal" amount.

A third and final trial over Jones' hoax claims is expected to begin around the end of the year in Texas. As in Connecticut, Jones was found liable for damages without trials in both Texas cases because he failed to turned over many records to the plaintiffs.

A former employee of Quebec's power utility charged with spying on behalf of China has been freed on bail while he awaits trial.

The white gunman who massacred 10 Black shoppers and workers at a Buffalo supermarket pleaded guilty Monday to murder and hate-motivated terrorism charges, guaranteeing that he will spend the rest of his life in prison.