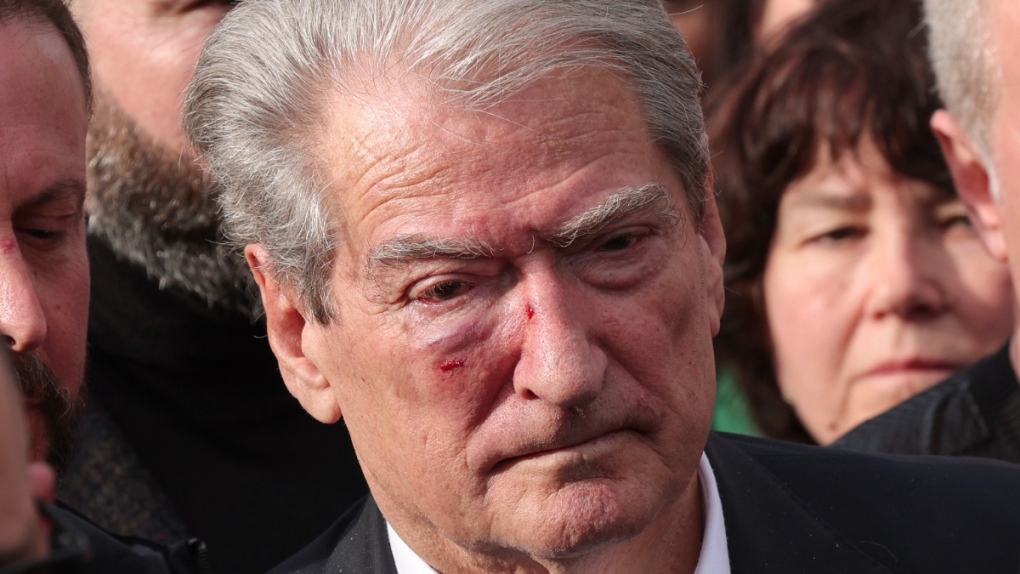 Sali Berisha, the leader of the Albanian opposition centre-right Democratic Party, injured, looks on after he has been attacked during an anti-government protest held near a summit of European Union leaders and their counterparts from the Western Balkans in the capital Tirana, Albania , on Dec. 6, 2022. (Franc Zhurda / AP)
TIRANA, Albania -

The leader of the Albanian opposition centre-right Democratic Party was attacked Tuesday during an anti-government protest held near a summit of European Union leaders and their counterparts from the Western Balkans in the Albanian capital.

Sali Berisha, a 78-year-old former president and prime minister, was leading hundreds of protesters walking toward the summit area accompanied by former President Ilir Meta when a man came out of the crowd and punched him in the face.

The attacker was immediately subdued by bodyguards. Witnesses saw Berisha with a bloodied face.

It is not clear who the attacker was or the reason for the attack.

Police said in a statement that the 31-year old suspect who was taken into custody had suffered from "psychiatric irregularities" and had previously faced charges involving acts of violence and drug trafficking.

The opposition was protesting to the alleged corruption of Prime Minister Edi Rama, which they also blame for the country's cost-of-living crisis and the exodus of young Albanians leaving for a better life in Western European countries.

Berisha directly accused Rama of the attack, saying he wanted to stop the opposition from staging the protest.

Albania has seen more than an 8% rise in prices this year, especially for basic food and fuel following the Russian invasion of Ukraine.

Rama says his Cabinet has kept inflation low compared with double-digit inflation elsewhere in Europe, and has noted that the government subsidizes electricity for families and small businesses.

Berisha's party has been plagued by infighting after U.S. Secretary of State Antony Blinken last year barred Berisha and his close relatives from entering the U.S. for "corrupt acts that undermined democracy" during his 2005-2013 tenure as prime minister. Britain did the same this year.

EU leaders and their Western Balkan counterparts are in Tirana Tuesday for talks aimed at strengthening their partnership as Russia's war in Ukraine threatens to reshape the geopolitical balance in the region.

A senior aide to Japan's prime minister is being dismissed after making discriminatory remarks about LGBTQ2S+ people.