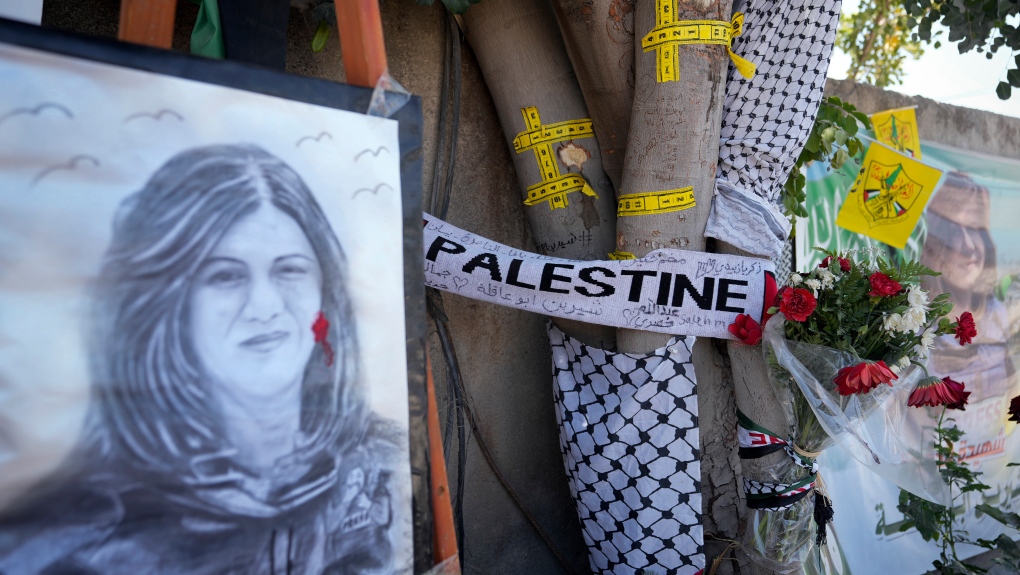 Yellow tape marks bullet holes on a tree and a portrait and flowers create a makeshift memorial at the site where Palestinian-American Al-Jazeera journalist Shireen Abu Akleh was shot and killed in the West Bank city of Jenin, May 19, 2022. (AP Photo/Majdi Mohammed, File)
Jerusalem -

The Al Jazeera news network says it will submit a case file to the International Criminal Court on the killing of reporter Shireen Abu Akleh, who was shot dead earlier this month during an Israeli raid in the occupied West Bank.

The Qatar-based network and the Palestinian Authority have accused Israeli soldiers of deliberately killing her. Israel rejects those allegations as a "blatant lie." It says she was shot during a firefight between soldiers and Palestinian militants, and that only ballistic analysis of the bullet -- which is held by the PA -- can determine who fired the fatal shot.

An AP reconstruction lent support to witnesses who say the veteran Palestinian-American correspondent was killed by Israeli fire, but any final conclusion may depend on evidence that has not yet been released.

Al Jazeera said late Thursday it has formed an international legal team to prepare a case dossier to be submitted to the ICC. The court launched an investigation into possible Israeli war crimes last year. Israel is not a member of the ICC and has rejected the probe as being biased against it.

Al Jazeera said the case file would also including the Israeli bombing of the building housing its offices in Gaza City during last year's war between Israel and the Palestinian militant group Hamas, "as well as the continuous incitements and attacks on its journalists operating in the occupied Palestinian territories."

Israel said the building -- which also housed the Gaza office of The Associated Press -- contained Hamas military infrastructure, but has not provided any evidence. The AP was not aware of any purported Hamas presence in the building and condemned the strike as "shocking and horrifying." No one was hurt in the strike, which came after an Israeli warning to evacuate.

"The Network vows to follow every path to achieve justice for Shireen, and ensure those responsible for her killing are brought to justice and held accountable in all international justice and legal platforms and courts," Al Jazeera said.

Israel says it cannot determine whether Palestinian militants or its own soldiers fired the fatal shot unless the PA hands over the bullet that killed Abu Akleh for ballistic analysis. The PA has refused to cooperate with Israel in any way, saying it doesn't trust Israel to investigate itself.

The PA announced the results of its own probe on Thursday, saying Abu Akleh was deliberately killed by Israeli forces and that there were no militants in the area. Israeli Defense Minister Benny Gantz rejected the findings, saying "any claim that the IDF intentionally harms journalists or uninvolved civilians is a blatant lie," referring to the Israeli military.

Palestinian Attorney General Akram Al Khateeb, in announcing the results of the probe, said the bullet that killed her was an armour-piercing 5.56 mm NATO round and that it appeared to have been fired by a Ruger Mini-14 semiautomatic rifle.

The Israeli military declined to comment on whether the gun described by the Palestinians matches one the military has previously identified as having possibly fired the fatal shot. It also declined to say whether the army uses the Ruger Mini-14 or whether any were in use during the May 11 raid in which Abu Akleh was killed, in the West Bank town of Jenin.

Israel has publicly called for a joint investigation with the PA, with the participation of the U.S. The State Department said this week that neither Israel nor the PA have formally requested its assistance. Each side is in sole possession of potentially crucial evidence, and neither is likely to accept any conclusions reached by the other.