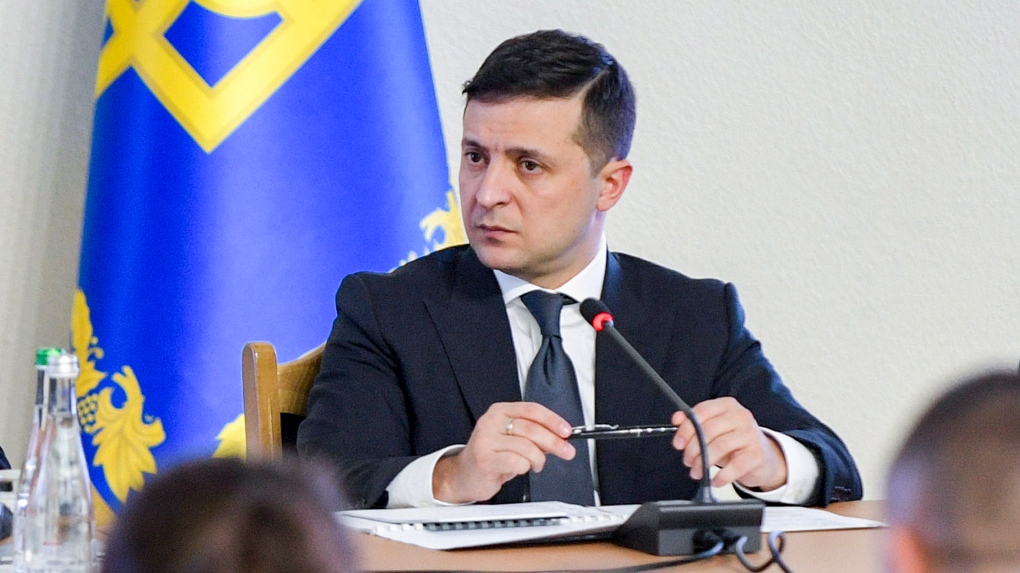 KYIV -- A volley of automatic gunfire hit a car carrying a senior aide to Ukrainian President Volodymyr Zelenskiy on Wednesday, an incident a senior official called an assassination attempt and Zelenskiy said may have been a message intended for him.

The aide, Serhiy Shefir, survived unscathed but police said his driver had been wounded in the attack near the village of Lesnyky, just outside the capital Kyiv.

A prosecutor said the car had been hit 18 times, and multiple bullet holes could be seen along the driver's side.

Police said in a statement they had opened a criminal case on suspicion of premeditated murder.

Zelenskiy, who is in New York for the UN General Assembly, said he did not know for now who was responsible for the attack, which shocked the country's political elite.

"I don't know yet who stood behind this," said Zelenskiy. "Sending me a message by shooting my friend is weakness."

Shefir is close to Zelenskiy and leads a group of advisers.

"I have not conducted any cases that would have caused aggression. I think this is intimidation," Shefir told a joint news briefing with police and Interior Minister Denys Monastyrsky.

"I think this won't frighten the president," he added.

Zelenskiy came to power on a promise to take on the country's oligarchs and fight corruption, and Mykhailo Podolyak, one of his advisers, said the assassination attempt could be a result of the campaign against the oligarchs.

Zelenskiy said he would be doubling down on his planned reforms rather than backing off.

"It does not affect the strength of our team, the course that I have chosen with my team - to change, to clean up our economy, to fight crime and large influential financial groups," he said.

"This does not affect that. On the contrary, because the Ukrainian people have given me a mandate for changes."

"This open, deliberate and extremely violent assault with automatic weapons cannot be qualified any differently than as an attempted killing of a key team member," Podolyak told Reuters.

"We, of course, associate this attack with an aggressive and even militant campaign against the active policy of the head of state," Interfax Ukraine quoted Podolyak as saying separately.

Parliament is this week due to debate a presidential law aimed at reducing the influence of oligarchs in Ukrainian society.

Police said they were investigating three scenarios: an effort to put pressure on the country's leadership, an attempt to destabilize the political situation, and the involvement of foreign intelligence services.

"The purpose of this crime was not to scare, but to kill," Monastyrsky, the minister, said.

Oleksandr Korniienko, the head of Zelenskiy's political party, said Russian involvement should not be ruled out.

"A Russian trace should not be absolutely ruled out. We know their ability to organize terrorist attacks in different countries," Korniienko told reporters.

Kremlin spokesman Dmitry Peskov said suggestions of Russian involvement "have nothing to do with reality."