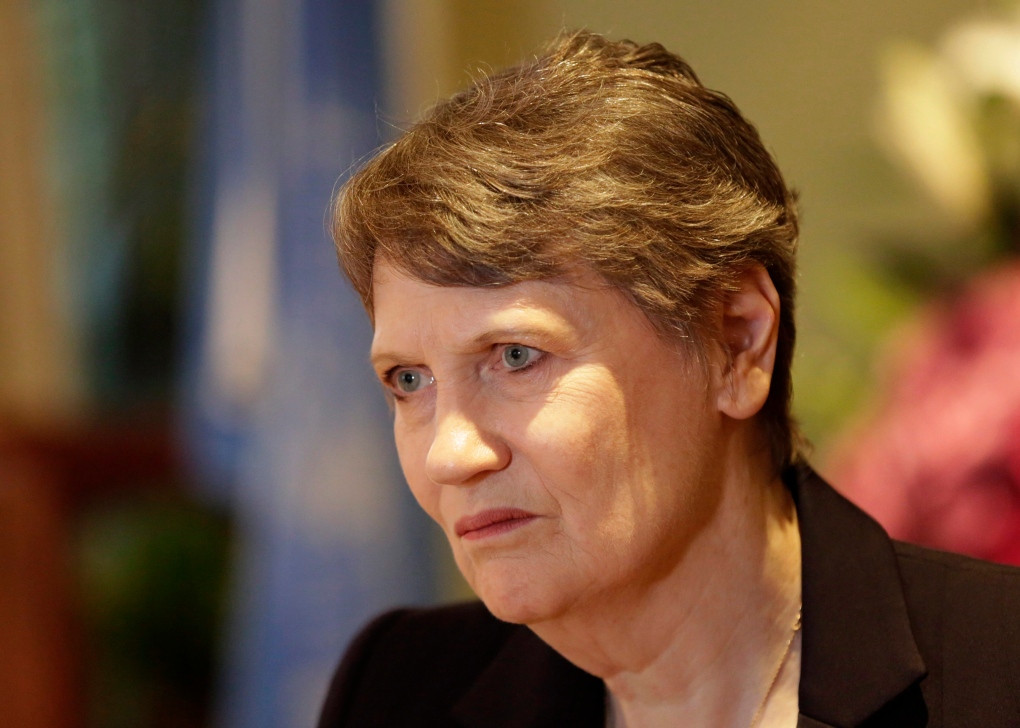 REHAB, Jordan -- Aid to Syria's millions of refugees must "go beyond relief" and help them make a living close to home, a top U.N. official said Sunday, as key international decision-makers gathered to find a new approach to the Syria refugee crisis.

Sufficient funding is needed for any shift, said Helen Clark, the head of the U.N. Development Program.

This year, donors paid less than half so far of the $4.5 billion aid agencies sought for Syrian refugees in neighbouring host countries, such as Jordan and Lebanon.

"The critical thing for Syrians and for the countries in the neighbourhood is support here, now," Clark told The Associated Press during a tour of northern Jordan. "It must go beyond relief. People want dignity. They want services. They want livelihoods. Our response is focused around those things which enable them to be independent, not dependent."

More than 4 million Syrians fled their homeland since 2011, after a popular uprising erupted against President Bashar Assad and quickly turned into a devastating civil war. Most initially settled in neighbouring countries, but conditions there have become increasingly difficult.

Syrian refugees are largely barred from working legally and have to resort to informal, low-paying jobs if they can find employment at all. Many have depleted their savings, while underfunded aid agencies have had to slash food and cash support. Unable to survive, tens of thousands of Syrians have headed to Europe.

A two-day conference in Jordan, which started Sunday and was convened by Clark's agency, is meant to chart a new path forward for helping refugees and their regional host countries. Participants include senior officials from the five main host countries, European nations and a range of aid agencies.

The influx of refugees has placed a heavy burden on the host countries, especially in poorer communities where many refugees have settled. It has overwhelmed services such as trash collection, created overcrowding in schools, driven up rents because of higher demands and forced down wages for unskilled labour.

During a tour Sunday, Clark visited UNDP projects that help Jordanian communities deal with the refugee crisis; in all, Jordan hosts over 600,000 refugees.

Clark visited Jordan's second largest landfill, Al-Akedir, which serves one million residents, including many refugees, in the four northern governorates closest to the Syrian border.

The landfill now has to absorb 1,300 tons of waste a day, compared to 900 tons before the start of the refugee influx; it poses a risk to water supplies and is in urgent need of rehabilitation, local officials told Clark. Canada is paying one-third of the $35 million rehabilitation project, leaving a large funding gap.

In the small community of Rehab, Clark met with Jordanians who started businesses with grants from UNDP and the private sector. Eighty small businesses have been launched so far and 120 more are in the pipeline, agency officials said.

Mohammed Shurafat, 22, opened a shop for herbs and spices with a 2,000-dinar grant. He and other small entrepreneurs presented their goods at stands set up for Clark's inspection, including ceramics, perfumes and cookies. "We are still in the beginning," he said. "Still, it's much better than being unemployed."

Labour rights for refugees are one of the most sensitive topics in the relations between aid agencies and host governments. Countries like Jordan are reluctant to grant such rights, pointing to high domestic unemployment. Donors, in turn, argue that refugees must find means for survival to reduce reliance on aid.

Clark said no specific demands were being made of the host countries, but noted that when she was prime minister of New Zealand, refugees were given work permits.

At the two-day conference, held on Jordan's shore of the Dead Sea, Clark said she is "beating the drum" to mobilize support for investing in livelihoods, not just emergency relief.

It's not a funding conference, but money is key, with current programs underfunded, she said. "There is so much you can do, limited only by financial support," she said.