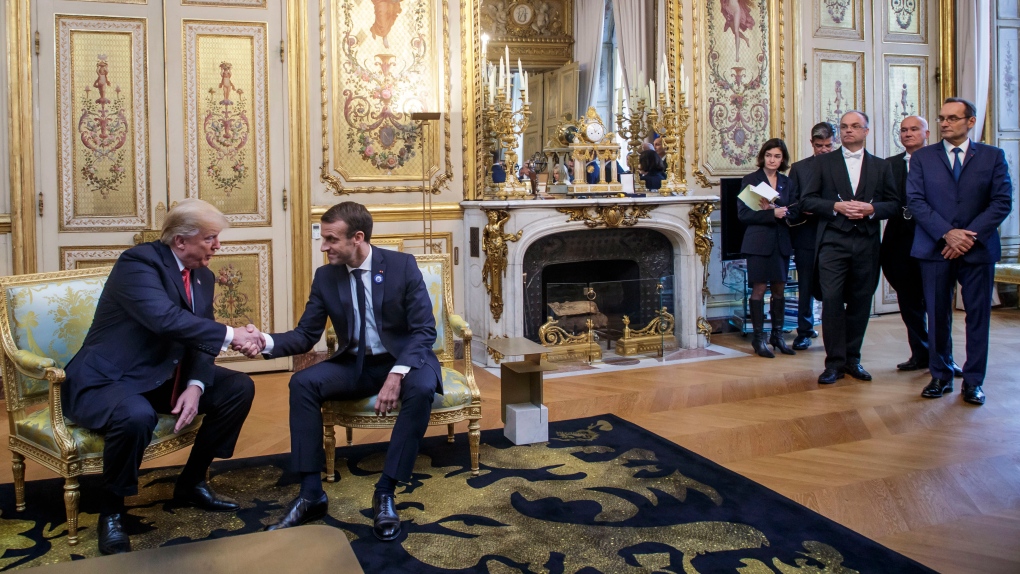 PARIS -- U.S. President Donald Trump and French President Emmanuel Macron tried to project unity Saturday after Trump had lashed out at one of America's strongest allies in Europe, claiming Macron insulted the United States when he pushed the idea of the continent having its own defence force.

The American and French leaders, who have had an up-and-down relationship, told reporters they were good friends before going behind closed doors for talks at the Elysee Palace. It was Trump's first stop on a weekend trip to Paris where dozens of world leaders were gathering to commemorate Sunday's 100th anniversary of the end of World War I.

Trump also had been scheduled to visit the Aisne-Marne American Cemetery at Belleau Wood on Saturday, but cancelled because of rainy weather that grounded the presidential helicopter. The president was criticized for not finding a way to get to the cemetery, which is about a two-hour drive east of Paris, where Americans killed in World War I are buried. The White House sent a delegation that included chief of staff John Kelly in his place.

The dustup over European security, which threatened to divert attention from the weekend's sombre remembrance ceremonies, was just the latest example of fallout from Trump's unpredictable brand of Twitter-assisted diplomacy.

His fractious, destabilizing relationship with Europe has driven a wedge between the U.S. and some of its oldest allies on issues including trade, defence spending and his seeming deference to their looming neighbour to the east, Russia's Vladimir Putin. It also underscored the hot-and-cold relationship that Trump has had with Macron, who has increasingly branded himself as a bulwark against the rising tide of Trump-style nationalism across Europe.

The brouhaha began Friday night, when Trump unleashed an angry Twitter jab at his host just as Air Force One touched down in Paris. Trump tweeted that Macron "has just suggested that Europe build its own military in order to protect itself from the U.S., China and Russia. Very insulting, but perhaps Europe should first pay its fair share of NATO, which the U.S. subsidizes greatly!"

Trump's tweet was especially wounding to Macron. Macron's office said Trump had misunderstood the French leaders' comments, lumping together two different ideas. Macron had said in an interview that Europe needs to protect itself against cyber threats and the "interference in our democracies" from "China, Russia and even the United States." Later, he made the case that Europe needs to build up its own military because it can no longer depend on the U.S. for defence.

The two men struck a more friendly tone as they opened their meeting at the grand presidential residence.

"We want to help Europe but it has to be fair. Right now, the burden-sharing has been largely on the United States," Trump said.

Trump has long complained about uncompensated U.S. defence spending that benefits allies, and earlier this year threatened to turn his back on NATO if members didn't boost their defence spending. Trump said Macron "understands that and he understands the United States can only do so much."

Macron defended his viewpoint, saying he shares Trump's insistence that there be more burden sharing. He said it's "unfair to have the European security today being assured just by the United States," but did not respond to a question about why he felt France needed protection from the U.S.

The episode was the latest example of a frequent Trump pattern: introducing tension before meeting with a world leader, then playing nice when they're face-to-face.

Before Trump travelled to Britain earlier this year, he gave an interview to a British tabloid in which he insulted British Prime Minister Theresa May's approach to the United Kingdom leaving the European Union. Trump said her political nemesis would make a great prime minister.

The interview was published as Trump was attending a grand welcome dinner hosted by May only hours after he arrived in London. Trump was far more cordial to May in person, complimenting her leadership and expressing his great respect for her.

It was the same with Macron, who welcomed Trump in the courtyard of the Elysee Palace with a handshake and pats on the arm. Inside a gilded meeting room, Macron referred to Trump as "my good friend" and, at one point, tapped him on the thigh. Trump said they had become "very good friends over the last couple of years" and were "similar in our views" on many issues.

Macron early on had tried to position himself as Europe's "Trump whisperer." But their personal relationship has failed to make much difference when it comes to stopping Trump from pursuing policies Macron strongly opposes.

Despite his insistent urging, Trump failed to heed Macron and other European leaders' advice not to pull the U.S. out of the landmark Paris climate accord and the Iran nuclear deal. He also refused to spare France from the tariffs he's slapped on steel and aluminum imports, citing national security risks. Trump has also been chipping away at a rules-based, multilateral system the U.S. helped build and Macron has worked to defend.

Weaker at home for unpopular economic policies and increasingly isolated in Europe, Macron has been positioning himself as a sort of anti-Trump, speaking out against the rising tide of Trump-style populist nationalism across Europe and the dangers of isolationist retreat. At the U.N. General Assembly this year, Macron said: "Nationalism always leads to defeat,"

"He's starting to become the antithesis of President Trump's public messaging," said Heather Conley, director of the Europe program at Center for Strategic and International Studies "He believes he is one voice that can champion this."

Central to those efforts is the inaugural Paris Peace Forum, a gathering of heads of state, government officials, heads of international organizations, corporations, academics, philanthropists and others beginning Sunday. The forum aims to revive collective governance and international co-operation to tackle global challenges.

Trump, however, will not be attending. The White House cited a scheduling conflict, saying the president instead would attend a Veterans Day ceremony to pay respects to U.S. soldiers who died on French soil.

President Macron of France has just suggested that Europe build its own military in order to protect itself from the U.S., China and Russia. Very insulting, but perhaps Europe should first pay its fair share of NATO, which the U.S. subsidizes greatly!