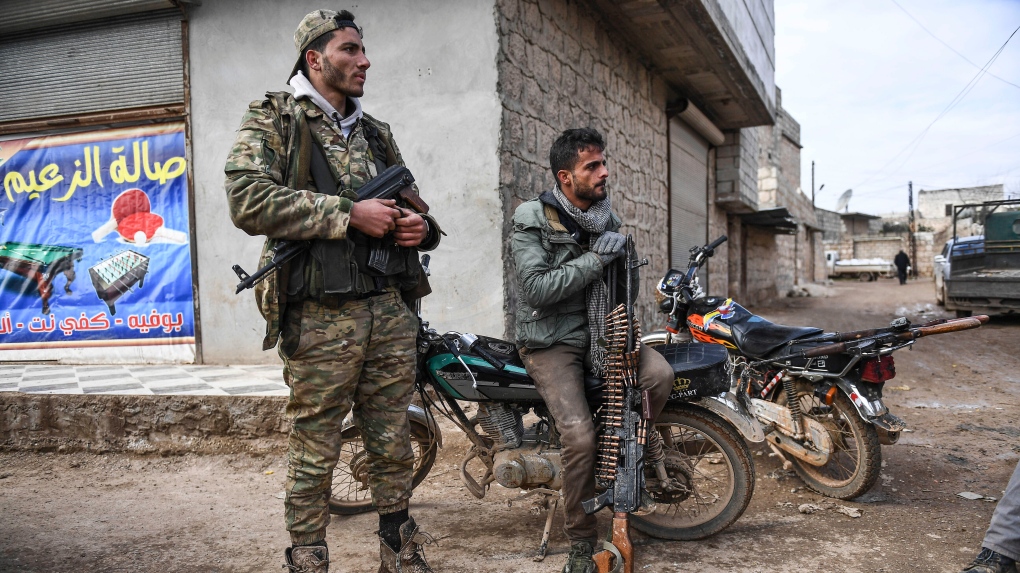 DAMASCUS, SYRIA -- Syrian President Bashar Assad congratulated his forces Monday for recent gains in northwestern Syria that led to his troops consolidating control over Aleppo province, pledging to press ahead with a military campaign to achieve complete victory "sooner or later."

Assad, who rarely appears in public, said in a televised address that the onetime economic hub of Aleppo, the provincial capital, will "return stronger than it was before."

The address came amid an ongoing military advance in northwestern Syria that has sparked a humanitarian catastrophe which the U.N.'s humanitarian chief Mark Lowcock warned "has reached a horrifying level." In a statement, he said the U.N. believes 900,000 people have been displaced since Dec. 1, most of them women and children.

In the past few weeks, government troops backed by Russian air power have captured more than 1,500 square kilometres (580 square miles) in the northwest, consolidating their hold over Aleppo province after capturing over 30 villages and hamlets in the western countryside in a single day Sunday. The advance secured the provincial capital that had for years remained within range of opposition fire.

The new gains, along with securing a key highway through rebel territory, are set to better link northern and southern Syria, including the city of Aleppo, which was Syria's commercial centre before the war. The highway, known as the M5, links the country's four largest cities and population centres and is key to controlling Syria.

The developments sparked late-night celebrations in the streets of Aleppo that continued through Monday, with state media showing residents waving flags and dancing in roads packed with vehicles.

"We should not rest, but continue to prepare for the coming battles, and therefore the battle of liberating Aleppo countryside and Idlib will continue, despite the empty noise that is coming from the north (Turkey)," Assad said.

Lowcock said "the crisis in northwest Syria has reached a horrifying level," calling the violence "indiscriminate" and stressing that "the only option is a cease-fire."

He warned that "the biggest humanitarian horror story of the 21st century will only be avoided if Security Council members, and those with influence, overcome individual interests and put a collective stake in humanity first." He did not identify any countries but the message appeared directed first and foremost to Russia, Syria's closest ally.

The government's rapid advances have sparked rare clashes between Syria and Turkey, which backs the rebels and has troops in the region to monitor a 2018 cease-fire deal. Turkey's president warned Assad to halt the advance, which also risks shattering an alliance forged between Turkey and Russia.

A Turkish delegation was in Moscow on Monday to discuss the crisis, and Turkey's Foreign Ministry said the delegations would continue talking Tuesday.

During Monday's session, the Turkish delegation "stressed the need to quickly reduce tensions on the field and to prevent the further deterioration of the humanitarian situation," the ministry said. It added that the sides also discussed measures that can be taken to fully implement the cease-fire for Idlib.

Rescuers and a medical aid worker said airstrikes on Darat Izza, a town still in opposition hands in northwestern Aleppo, knocked two health facilities out of service. One hospital was hit directly, wounding two staffers, said Mazen Kewara of the Syrian American Medical Society, which supports the hospital's dialysis unit. Video from the rescue team, Syrian Civil Defence, showed extensive damage. Another airstrike hit near the other medical facility, some 150 metres (yards) away.

Syrian rebels were driven out of the provincial capital's eastern quarters in late 2016, which they had controlled for years while battling government forces in charge of the western section. However, rebel groups continued to target government forces from outside the city with mortar rounds. They also controlled large parts of western rural Aleppo province, territories that linked them to Idlib province, the last major rebel stronghold.

Assad spoke shortly after a statement by the Syrian military praising troops for rapidly taking over rebel-controlled territory in the northwest, vowing to continue to chase armed groups "wherever they are."

Gen. Ali Mayhoub, spokesman for the Syrian Armed Forces, said in a televised speech that government troops were continuing their ground advances to "eradicate what is left of terrorist groups," and he congratulated the soldiers for the swift advances in "record time."

Support from Russia and Iran has enabled Syrian troops to regain control of much of the territory they had lost to armed groups trying to topple Assad.

Over 400,000 people have been killed and half of Syria's population displaced since peaceful protests in 2011 turned into a civil war.

Separately, state media reported that Syrian authorities on Sunday had uncovered a mass grave containing nearly 70 bodies in eastern Ghouta, an area outside of Damascus that rebel fighters lost control of in April 2018.

The area, which includes the town of Douma and extends into the capital's suburbs, was widely destroyed as Syrian troops drove out rebel fighters there two years ago.

Ayman Khallou, a forensic doctor at a military hospital, told Syria's state news agency that most of the remains found in the mass grave were handcuffed. He said most of the bodies appeared to have gunshot wounds to the head, while some were strangled. The official provided no immediate evidence to support the claim. Human rights groups blame both sides in the conflict for carrying out atrocities in the civil war.

Syrian authorities said a woman's body was among those in the grave. Damascus' military police chief said a tip had led to the discovery of the mass grave in al-Ebb, a farm area southeast of Douma.

The report led to speculation among Syrians that the body could be that of Razan Zaitouneh. The prominent activist was documenting violations by government and rebel groups in the war when she disappeared, along with two other colleagues and her husband, in December 2013.