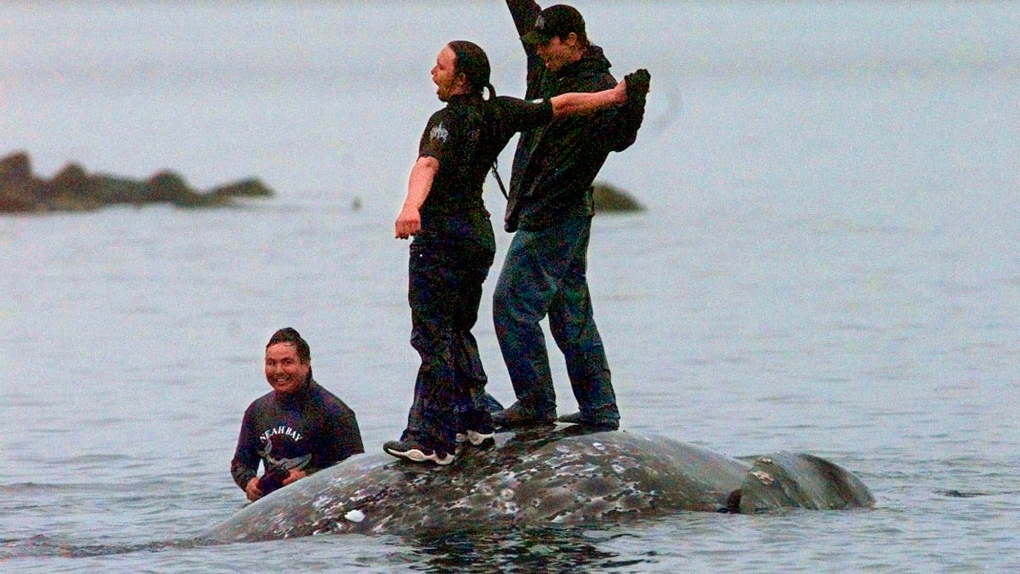 In this May 17, 1999, file photo, two Makah Indian whalers stand atop the carcass of a dead gray whale moments after helping tow it close to shore in the harbor at Neah Bay, Wash. (AP Photo/Elaine Thompson, File)

SEATTLE -- Patrick DePoe was in high school the last time his Native American tribe in Washington state was allowed to hunt whales. He was on a canoe that greeted the crew towing in the body of a gray whale. His shop class worked to clean the bones and reassemble the skeleton, which hangs in a tribal museum.

Two decades later, he and the Makah Tribe -- the only American Indians with a treaty right to hunt whales -- are still waiting for government permission to hunt again as their people historically did. The tribe, in the remote northwest corner of Washington's Olympic Peninsula, hopes to use the whales for food and to make bone handicrafts, artwork and tools they can sell.

The tribe's plans have been tied up in legal fights and layers of scientific review. The next step is a weeklong administrative hearing that began Thursday in Seattle. Whatever the result, it's likely to be stuck in further court challenges, as animal rights activists have vowed to block the practice they call unnecessary and barbaric.

"It shouldn't have taken 20 years to be where we're at now," said DePoe, a tribal council member. "People ask how it makes me feel. I want to ask, `How does it make you feel that this is the process we're having to go through to exercise a right that's already been agreed upon?' It's a treaty right. It's settled law."

In 1855, the Makah, a tribe that now numbers about 1,500, turned over 470 square miles (1,217 square kilometres) of land to the U.S. under a treaty that promised them the "right of taking fish and of whaling or sealing at usual and accustomed grounds." They killed whales until the 1920s, giving it up because commercial whaling had devastated gray whale populations.

By 1994, gray whales in the eastern Pacific Ocean had rebounded and they were removed from the endangered species list. Seeing an opportunity to reclaim its heritage, the tribe announced plans to hunt again.

The Makah trained for months in the ancient ways of whaling and received the blessing of federal officials and the International Whaling Commission. They took to the water in 1998 but didn't succeed until the next year, when they harpooned a gray whale from a hand-carved cedar canoe. A tribal member in a motorized support boat killed it with a high-powered rifle to minimize its suffering.

The hunts drew protests from animal rights activists, who sometimes threw smoke bombs at the whalers and sprayed fire extinguishers into their faces. Others veered motorboats between the whales and the tribal canoes to interfere with the hunt. Authorities seized several vessels and made arrests.

After animal rights groups sued, the 9th U.S. Circuit Court of Appeals overturned federal approval of the tribe's whaling plans. The court found that the tribe needed to obtain a waiver under the 1972 Marine Mammal Protection Act.

The tribe applied in 2005. The process repeatedly stalled as new scientific information about the whales and the health of their population was uncovered.

Some of the Makah whalers became so frustrated with the delays that they went on a rogue hunt in 2007, killing a gray whale that got away from them and sank. They were convicted in federal court.

NOAA Fisheries has proposed regulations allowing the tribe to harvest 20 whales over a decade, with limits on the timing of the hunts to minimize the chance of killing endangered Western Pacific gray whales.

The population of Eastern Pacific gray whales, which number about 27,000, is strong, despite a recent die-off that has resulted in hundreds washing up on West Coast beaches, federal scientists say.

The hearing that began Thursday will focus on highly technical arguments about whether the tribe meets the requirements for a waiver.

"There isn't a big conservation issue here," said Donna Darm, a retired NOAA official who began working on the issue in 2005 and still does as a contractor.

The Sea Shepherd Conservation Society and Animal Welfare Institute oppose the hunts. They argue that NOAA's environmental review has been inadequate, it's not clear to what extent the whales' recent die-off has hurt the population, and the Marine Mammal Protection Act may have voided the tribe's treaty right.

They also say the tribe cannot claim a subsistence or cultural need to hunt after so many decades.

"The Makah's family and tribal traditions and rituals associated with its whaling history can continue without the resumption of whaling," the Animal Welfare Institute said in a statement Thursday. "The Makah could, if it chooses, attract and educate untold numbers of visitors to its lands by promoting nonlethal use of whales through whale watching."

DePoe chafes at outside groups dictating what his tribe's culture requires. He recalled the pride he felt when the Makah crew succeeded, the joy of sharing the feast and the taste of the whale meat.

"I have a little brother who's in his 20s," DePoe said. "He doesn't remember it. I'm hoping one day he can experience that."